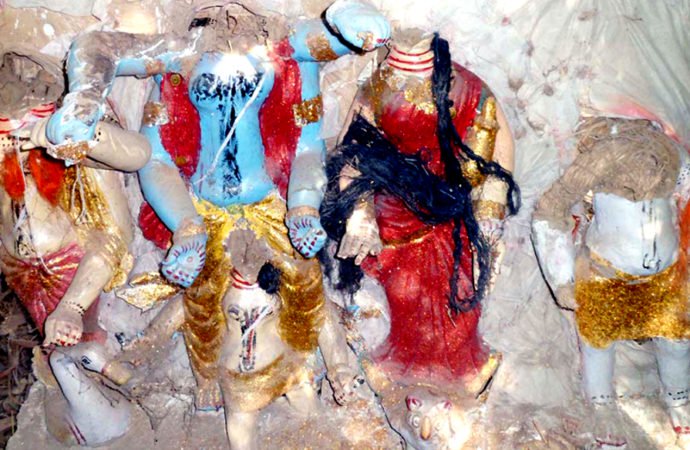 Five murtis of Hindu gods and goddesses at a Durga temple in a Bangladesh village were vandalized by unknown individuals on Monday night.

The incident which occurred in Bashikora village under Adamdighi upazila, Bogra has shocked the small Hindu community in the village, who hitherto thought they have no enemies in the area.

Speaking to the Dhaka Tribune, Chhobi Rani, who lives near the Hindupara Durga Temple in the village, said she found broken pieces of the arms and heads of the idols lying outside the temple when she went there for morning offerings on Tuesday.

Utpal Chandra Das, president of the temple’s management committee, said the incident had upset the community of 30 Hindu families who currently live in the neighbourhood.

“We don’t have a clue why this happened. We have no issues with anyone in the area,” he told the Dhaka Tribune.

However, a similar incident happened five years ago in which the temple’s idols were desecrated, he added.

Adamdighi police station OC Kinnor Roy said they had already inspected the crime scene and were trying to identify and arrest the perpetrators.