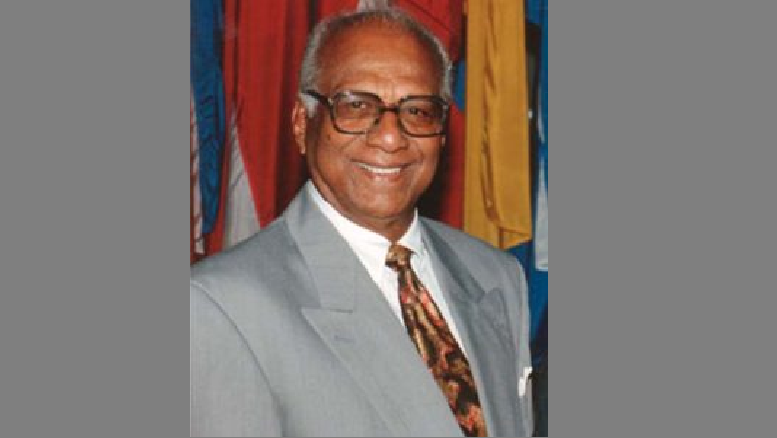 Cheddi Jagan was first elected Chief Minister of Guyana in 1953. He became the first person of Indian descent to be head of a government outside of India. Soon after Jagan’s victory, the colonial ruler, Winston Churchill, ordered a British military intervention, suspended the constitution and installed an interim government because of the fear that Jagan would create a foothold for the Soviet Union in South America.

Jagan won the elections again in 1961 with his People’s Progressive Party (PPP), and became the country’s Premier from 1961 to 1964. Jagan is widely recognised in Guyana as the ‘Father of the Nation.’ He died on March 6th 1997 after having lived for 78 years. April this year marked his 24th death anniversary.

In 2011, Dr. Mohan Ragbeer, a Guyanese medical doctor and political insider, wrote a two-volume blockbuster entitled The Indelible Red Stain. In his book(s), Ragbeer, tells the story of how politics ruined the tropical paradise, and sparked a bloody race war that led to the massive exodus of its nationals.

The following are highlights of a virtual public meeting held on April 25, 2021 on the topic “Dr. Cheddi Jagan, Guyana, Marxism, Politics and the USA: Reviews of the book, The Indelible Red Stain, by Dr. Mohan Ragbeer.” The Pan-Caribbean meeting was hosted by the Indo-Caribbean Cultural Centre (ICC). It was directed by Dr. Kumar Mahabir, chaired by Sharlene Maharaj and moderated by Bindu Deokinath Maharaj, both women of Trinidad.

The speakers were Dr. Mohan Ragbeer, a retired physician, former consultant and dean, author of three books and an unpublished autobiography and newspaper columnist; Dr. Tulsi Dyal Singh, a retired physician and former Bank Director and Chairman of a Renewable Energy Corporation; Ramnarine Sahadeo, a former teacher and Public Servant in Guyana, Ontario lawyer who initiated a Gandhi scholarship at McMaster University; and Ramdath Jagessar, a journalist for 30 years in Trinidad and Canada and editor of the first edition of The Indelible Red Stain.

“The Indelible Red Stain is a book in two volumes about Guyana, then British Guiana (BG), a British sugar colony in South America, made up of six races, 51% Indians, 34 % Africans, mixed race10%, the rest British, Chinese, Portuguese and native tribes. The book includes many strands, one dealing with the impact of Dr Cheddi Jagan (CJ), a son of indentured sugar-workers, on the eve of Guyana’s independence.

Dr Jagan was trained in dentistry in the USA, married Janet Rosenberg, a communist, and returned to BG. Setting up practice in Georgetown, they met and befriended Tulla Hardeen, a successful businessman, and his family (which included the author). Socially and politically, Tulla becoming a confidential strategist, backer and economic adviser of a moderate socialism.

The book recounts the Jagans’ efforts to spread communism at personal and group levels (trade unions, clubs, societies). They started the Political Affairs Committee, a socialist discussion group, circulated a political bulletin, then a periodical named Thunder, followed by the newspaper, Mirror. Dr Jagan joined the BG East Indian Association, where, as Secretary in 1947, he met leaders like Dr J.B. Singh, who mentored him, and showed him their Centennial Resolutions of 1938 forecasting BG’s development. They were welcomed at the Colonial Office, but action stalled by World War II.

In late 1947, Dr Jagan won a seat in the Legislature, and there pushed socialism, which alerted UK-MI5 and the newly-formed US-CIA. When the PPP was launched in January1950; he invited Forbes Burnham, an Afro-Guianese lawyer and trade unionist, to be Chairman, against major advice, but the act united the two races politically.

I interviewed CJ in depth (details in book 1), and documented his views. Elections in 1953 under a self-rule constitution gave PPP power, Jagan being the only one with legislative experience. Their show of “communist” orientation scared the USA, which persuaded MI5 to advise suspension of the Constitution. Churchill obliged, and installed a rightist government, which served for four years.

In 1955, Burnham failed in a bid to seize the Party, quit and led a faction of the PPP until 1957 when he formed the Peoples’ National Congress (PNC). At an inquiry in 1955, Jagan admitted under oath, that he was communist; Burnham had evaded that enquiry, and though equally leftist, had pretended otherwise. They stood by while the Interim Government penalised PPP backers.

The PPP won the elections in 1957 on a moderate platform. Invited to an OAS meeting by the hopeful USA, CJ gave a Communist appraisal of Latin America, of which one observer remarked, “instead of the wisdom of a Gandhi, we heard Stalin in educated English!” In 1961, under self-rule; he went to the USA for financial support, was offered it contingent on a declaration of anti-communism. He came home empty-handed. The PNC and UF praised the US, stirring it to maintain pressure on the UK, which was less agitated by Jagan’s posture, and said so.”