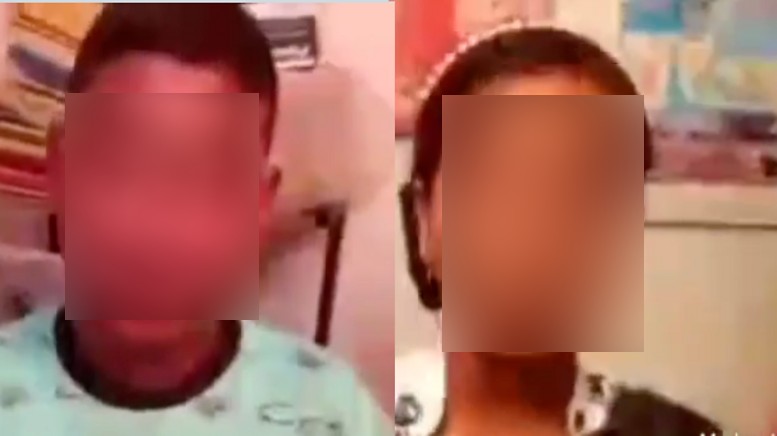 Voice of Bangladeshi Hindus, a Twitter account dedicated to the welfare of Hindus in Bangladesh, has shared a shocking video on social media. The video features several Hindu children who narrate how they are being compelled to study Quranic verses and other Islamic texts.

A class seven girl student of Shafiuddin Public School in Dhaka stated that a teacher she identifies as Nazmul Sir (Md Nazmul Ahmed) in her school touches them indecently and forces them to convert to Islam. He routinely asks them to start eating beef and says they will attain peace by accepting Islam.

Another Hindu boy shown in the video is a class five student. He recounts that the same teacher, Nazmul, had beaten him up many times for not reading Islamic books. Nazmul had forcefully taught him Islamic books for three months and then took a test. When the child refused to learn from the Islamic books, the teacher would resort to physical assaults.

The video also shows the victimized student’s father and highlights that it has become difficult for them to stay in their locality. The video suggests that Bangladeshi institutions have taken up the religious conversion of Hindu minors as their agenda, and the teachers are working more as the agents of this sinister agenda than educators. That this shocking practice is taking place in the capital city is appalling and leaves us wondering what can happen to Hindu children going to schools in more remote parts of Bangladesh.

Over the past few months, there has been a wave of attacks, humiliation and arrests of Hindu teachers in Bangladesh. The Islamists in Bangladesh seem to have formulated a sly plan to force religious conversions on Hindu students, remove the Hindus from the education field, and substitute them with radical Islamists like Nazmul Ahmed, one of the initial tools in that plan.

Though Bangladesh claims to be an Islamic republic helmed by the relatively secular Bangladesh Awami League party, throughout the reign of Sheikh Hasina, the sufferings of Bangladeshi Hindus have grown exponentially. Hasina shows no interest in controlling the radical elements in her country; in fact, it is alleged that, like Mamata Banerjee in West Bengal, Hasina in Bangladesh is influenced and controlled heavily by local Islamist forces. The sufferings of the Hindus, hence, raise no eyebrows.