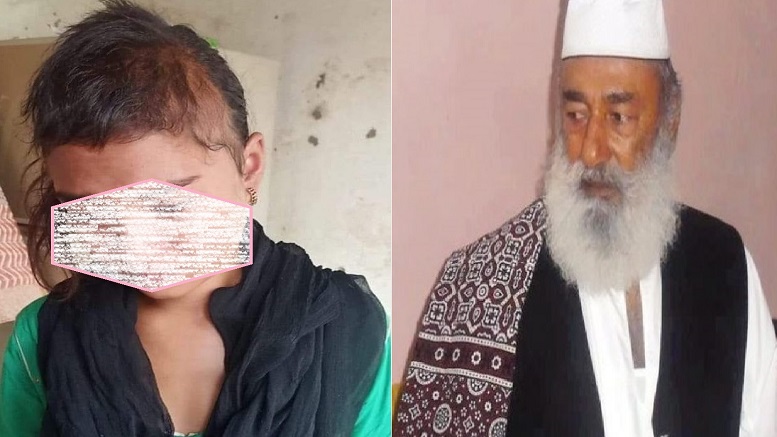 The world watches mutely even as hundreds of minor girls in Pakistan are ruthlessly abducted from their homes, raped, and then converted to Islam and ‘married’ to men twice or thrice their age. Many are barely into their teens. Social media documents these crimes, but the Islamic regime turns a blind eye to such atrocities. Victims include both Hindus and Christian girls.

Like sex slavery, age too seems of little importance under Pakistan’s sharia-inspired laws. Socially, Hindus are so dehumanized in Pakistani society that they can no longer exert any political pressure amongst the ruling class/military, the courts, or even the local police. Unless the international community acts against this repugnant human rights violation being meted out mostly to underage Hindu girls, minorities will fast become extinct in Pakistan.

Islamists recently abducted a Hindu girl aged just 13 years named Phooli d/o Mano Meghwar from a village near Tando Jan Mohammad in Sindh. She was raped and later converted to Islam and is now allegedly used as a sex slave. A video, shared below, shows the helpless laborer father and his squalid living conditions. A group of locals is explaining the crime and requesting the government/ courts to bring about laws capable of instilling some confidence in the minorities and curbing this menace.

"We are helpless Hindus, we dont have power. Our minor girls are abducted for sex-slavery in name of Islam. We requested to government, courts & Army but no one helping us"
A 13-year-old Hindu girl Fooli d/o mano meghwar abducted, raped & converted to Islam in Tando Jan Muhammad pic.twitter.com/4GGwvmJAG5

Minor girls are abducted and converted and made to recite the Kalima (kalama) – the 6 Islamic phrases which reflect the foundational beliefs of Islam and are often taught to and recited by South Asian Muslims. Once the girl has been mentally broken, mullahs are called in to recite these ‘holy’ verses. Bereft of options, the tortured girl repeats them, and viola, she gets ‘admitted’ into Islam!

One such victim was Kousar, d/o Shankar Lal adbucted from Mirpur Mathelo in Ghotki district, Sindh. She was subsequently raped and ended up a sex slave. Her family somehow managed to retrieve the girl, at which point her kidnappers released a video showing her repeating the Kalima. They are claiming that as as the girl is now Muslim, she can no longer return to her ‘kafir’ parents – apostasy, that is leaving Islam, is punishable by death as per sharia. So the girl and her family can either accept a life of sex slavery for her, or she can die.

"KALAMA" is a tool to legalize sex-slavery of Non-Muslim abducted girls in Pakistan. A minor Hindu girl Kousar D/o Shankar Lal abducted from Mirpur Mathelo. Her family found her & this video comes to retain girl by claric Mian Javed of Burjhundi,Ghotki-Sindh@USCIRF @Europarl_EN pic.twitter.com/gkdWSKtAuo

The mullah seen in the video above is Mian Javed, nephew of the notorious Abdul Haq a.k.a. Mian Mithu, the pir (head) of Dargah Bharchundi Sharif, a Sufi shrine in Ghotki, Sindh infamous for converting minor Hindu girls.

Mithu is Sindh’s converter-in-chief. He is a terrorist who attained international infamy back in 2012 when the Pakistan Supreme Court allowed a Hindu girl named Rinkle Kumari to go home with a Muslim man linked to Mithu’s group, after she ‘declared’ herself a Muslim in court. Rinkle’s harrowing tale can be read here. Mian Mithu was a legislator with the ruling PPP at the time Rinkle’s abduction occurred.

He is also the mastermind behind the Ghotki violence where extremists unleashed violence vandalizing Hindu temples, schools, businesses, and homes after Mithu accused a local Hindu school teacher named Nautan Daas of ‘blasphemy’. The actual trigger for the Ghotki carnage was the abduction of another Hindu girl Monika Luhano aged 11, by the Mithu mafia.

Recent videos show that he is still very much in business.

At Malkanwala in Pakistani Punjab, a 14-year-old Christian girl, Sunita Masih d/o Bashir Masih was abducted & gang-raped by Muslim men. Her rapists wanted her to convert to Islam even as she was being raped. Upon refusal, they cut her hair & wounded her private parts.

In a similar case, a minor Hindu girl named Leylan Kohli was gang-raped for 4 days by one Mohammad Tanveer and his friends in the Sindh province of Pakistan. Police refused to act against her rapists, and now the accused are adamant to take Leylan away from her parents saying “Since she recited Kalama during rape, she’s Muslim now. She must not live with infidels, and must be handed over to us.”

The self-proclaimed pillars of human rights worldwide remain conspicuously silent on such atrocities. Even those bestowed with Nobel prizes, international superstars of women/child rights like Malala and Greta, have not thought it fit to comment on the situation in Pakistan.