“She recited Kalima during rape so is Muslim now, hand her over”: gang-rapists of minor Hindu girl 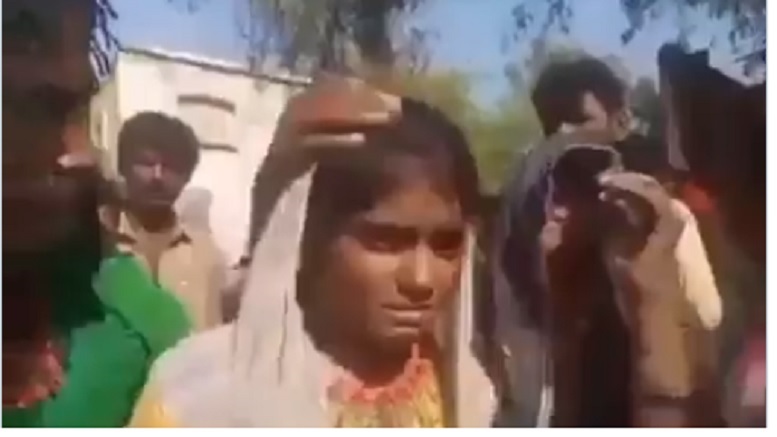 A minor Hindu girl named Leylan Kohli was gang-raped for 4 days by one Mohammad Tanveer and his friends in the Sindh province of Pakistan. However, this was not the end to the misery of the poor victim and her family. The culprits are now adamant to take Leylan away from her parents on ‘religious’ grounds stating that she recited kalima (kalma) during rape so she’s Muslim now, and so cannot live with her ‘infidel’ family and must be handed over to them.

Kalima are the 6 Islamic phrases which reflect the foundational beliefs of Islam and are often taught to and recited by South Asian Muslims. So while they were raping her, the accused thought it fit to carry out Dawah (Islamic proselytisation) by making the victim recite religious phrases.

“Since she recited KALAMA during rape, she's Muslim now. She must not live with infidels, and handed over to us"

Demands by Muhammad Tanveer & friends who abducted this Hindu Minor girl Leylan Kohli & constantly raped her for 4 days in captivity.pic.twitter.com/pYVrrhi07s

The incident allegedly took place in Kot Ghulam Muhammad. The heart-wrenching video of the girl has been circulating on the internet where she’s explaining the incident. She stated that she was kidnapped and later raped for four days by a Muslim man named Muhammad Tanveer and his friends. The police have NOT held the culprits accountable and instead of filing a case against them, they have allowed them to roam freely.

Since the rapists are free and still on the prowl, Leylan and her family live in fear. It is possible that in order the intimidate the child and her family to keep quiet, the accused are now throwing in the conversion angle as that is a sure-shot way of activating the powerful mullah (Muslim cleric) lobby. Once someone ‘converts’ to the ‘true’ faith of Islam, there is no way he/she can be allowed to go back to a ‘false’ religion. Apostasy or leaving Islam invites death as per Sharia, the Islamic law.

One hopes that Leylan is at least left alone with her parents, if the Pakistani system cannot get her justice. The worst thing that could happen now is for her to be taken away to some women’s shelter while the police ‘investigates’. Such girls are then threatened with dire consequences and not allowed to meet their parents. The terrorized victim is forced to parrot the rapist’s version in court. She has to choose, either agree that she converted as per her wishes or face the violent wrath of her tormentors. Such abductions and forced conversions can occur even with girls as young as 12-years-old like Kajal Bheel.

Most often, the abductor and rapist walks free with the victim in tow! No thought is even spared for the parents of the girls. Most girls who are abducted are subjected to extreme violence and gang rape. Their stories usually emerge many years after the actual abduction.

That such incidents keep repeating without any large-scale condemnation from within Pakistan shows how sick the majority culture there has become due to the influence of Islamists. Mainstream media in Bharat and the anti-nationals who partook in the violence that surrounded the introduction of the CAA, either stay silent or downplay such cases. The global community, including Bharat, has totally failed in holding Pakistan accountable for such crimes which are a blot on humanity.