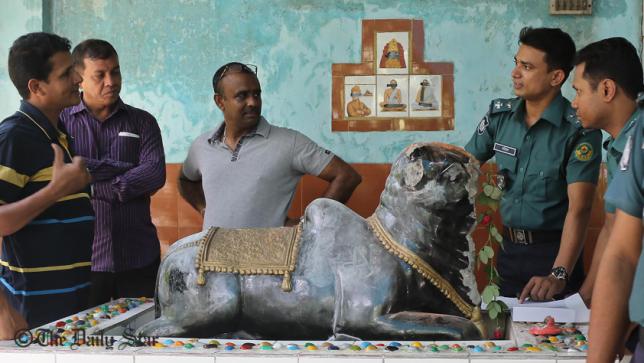 Desecration of Hindu temples and vandalism of murtis is a common occurrence in Islamic and Christian majority regions, as fundamentalists of both these religions contemptuously regard murtis as idols and idol-worship is reviled as devil-worship in their respective religious doctrines. What the fanatics don’t realize is that a murti is an embodiment of the divine, which  after Prana Pratishtha ceremony becomes identical with the deity it represents.

This problem is severe in Bangladesh, formerly East Pakistan, a Muslim-majority country where Hindu population has dwindled from 22% of the total population in 1951 to less than 8% today.

Unidentified miscreants vandalised two murtis at a temple in Bandar Police Station area in Chittagong city, Bangladesh early on May 14. As per this report in Bangaldeshi news portal www.thedailystar.net –

“Ajit Shil, the sebayet (custodian) of the temple, told our Chittagong staff correspondent that he left the temple around 10:00 PM last night but when he returned around 6:00 AM today he found two idols broken.

The miscreants damaged the idols of Kal Bhairav, which was around eight feet tall, and Nandi Keshara and also set fire to a part of the temple, he said adding that they also disfigured four portraits including Swami Vivekananda.

The attack was carried out in the wee hours of the day and no one was inside the temple at the moment, Ajit Shil added.

Hearing the news, locals blockaded a key intersection in the city around 8:00 AM halting vehicular movement for 45 minutes, said Bikash Sarkar, inspector (investigation) of Bandar Police Station. They freed the intersection when police assured them of arresting the culprits, he said.

A team of crime scene unit of Criminal Investigation Department (CID) reached the spot soon after the incident and collected evidences including fingerprints, he said. Police were investigating the incident and the criminals will soon be brought to book, the inspector added.”

Other recent incidents of temple desecration in Bangladesh –

Here are some Quranic injunctions against idol-worship which is considered an ‘unforgivable sin’ in Abrahamic religions like Islam and Christianity.

Quran [4:48] GOD does not forgive idolatry, if maintained under death, but He forgives lesser offenses for whomever He wills. Anyone who sets up idols beside GOD, has forged a horrendous offense.

The Bible has similar verses –

Deuteronomy 4:25-26  “When you become the father of children and children’s children and have remained long in the land, and act corruptly, and make an idol in the form of anything, and do that which is evil in the sight of the LORD your God so as to provoke Him to anger, I call heaven and earth to witness against you today, that you will surely perish quickly from the land where you are going over the Jordan to possess it. You shall not live long on it, but will be utterly destroyed.

Exodus 34:17  “You shall make for yourself no molten gods”

(We thank twitter user @ratribose for sharing this news)