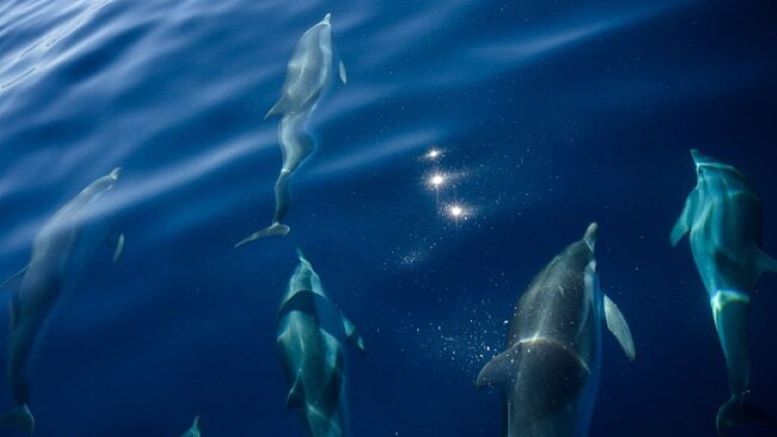 The massacre of 1400 Dolphins in a single day in Denmark’s Faroe Islands has sparked anger and outrage. Hunting of sea mammals is a tradition in the Faroe Islands which is a self-governing archipelago that comes under the ambit of Denmark.

Grindadrap is the barbaric hunting of sea mammals including dolphins and whales in the Faroe Islands that has been going on in the name of tradition. In keeping with this ‘tradition’, more than 1400 dolphins were hunted on Sunday in what is being dubbed as ‘record catch’.

The pod of white-sided dolphins that had been driven into North Atlantic’s largest fjord, was herded into the shallow waters of Eysturoy island’s Skalabotnur beach where the mammals were brutally slaughtered using knives. The carcasses were then pulled ashore to be distributed among the locals.

Video footage shows heart-wrenching scenes of hapless dolphins thrashing in the water that turns red with the blood of the poor mammals even as hundreds of people watch on from the beach.

In fact, this custom is defended by supporters who state that this is a sustainable way of gathering food from nature and that it is an important part of their culture. According to the marine biologist from Faroe Islands Bjarni Mikkelsen, this was the highest number of dolphins hunted ever in a single day in the Faroe Islands.

The government of Faroe Islands even has a defense ready when it says about 600 pilot whales are caught every year on average. White-sided dolphins are caught in lower numbers, such as 35 in 2020 and 10 in 2019. It defies logic as to how slaughtering mammals be defended irrespective of the numbers.

Even though Olavur Sjurdarberg, chairman of the Faroese Whalers Association, ‘admitted’ to BBC that the killings were ‘excessive’, added that ‘it was a mistake’ and that no laws were broken. It is worth mentioning that hunting sea mammals is legal and regulated by the authorities in the Faroe Islands. It is quite appalling that the catch was ‘approved’ by local authorities.

Even as the west loves to project itself as a ‘civilized’ society while looking down upon Asian and African nations in general and a Hindu Bharat in particular, the fact of the matter is that several European ‘traditions’ are nothing but glorified and legalized barbarism.

Take fox hunting, for example, which is practiced in the UK (United Kingdom). Fox hunting is a traditional ‘sport’ in which hunters, usually on horseback, follow a pack of hunting dogs aiming to pick up the scent of a fox, chase it and kill it. Although it is said to be ‘illegal’ in some parts of the UK, it has come to light that laws are flouted more often than not.

Hunters block the escape routes of the foxes a day before the hunt since the natural defense of a fox is to escape predators by going underground. In case, a fox manages to escape underground, terriers are sent down the hole to trap the fox while the hunters dig it out before shooting it.

There is scientific evidence to show that fox hunting has a deep impact on the animal and compromises the animal’s welfare. In fact, it has also been learned that fox hunting doesn’t kill the animal quickly but that the animal sustains numerous bites and tears to its flanks and hindquarters – causing enormous suffering before death.

Several other animals have also become victims of hunting including badgers and hounds bred for hunting. Besides bans on hunting not being properly implemented, there have actually been attempts to weaken hunting laws with one of these coming as recently as July 2015.

Equally barbaric if not more is the ‘sport’ of bullfighting and bull-running in Spain. Spanish bullfighting involves the animal being attacked by a ‘cuadrilla’ (entourage) comprised of men on foot and others on horseback, armed with lances and barbed harpoons called ‘banderillas’.

These are merely some examples of European hunting and other ‘traditions’ where animals are treated with disdain. While Europeans and their brown sepoys lecture Hindus and take objection to the celebration of our festivals such as Dahi Handi, Jallikattu etc. using foreign-funded NGOs such as PETA, they conveniently look the other way when it comes to calling out the Western ‘traditions’ like Grindadrap.

Contrast this with Hindu Dharma where every living being is accorded equal status. Hindu Dharma teaches us to live in harmony with nature. Despite this, Europeans and mentally colonized Anglophone elites in Bharat project Hindus and our Dharma as ‘superstitious, obscurantist and oppressive’.

Atrocity literature was created by exaggerating and even distorting customs like Sati, devadasi system so that they could help missionaries to use this propaganda against Hindus. unfortunately, such fake propaganda is being used by evangelicals as a weapon for their conversion agenda against Hindus to this day.

European hypocrisy is amply apparent when the mass hunting of poor sea mammals is justified in the name of ‘tradition’ whereas Bharatiya Hindu tradition of jallikattu where animals are well taken care of is mocked and ridiculed.

The West should take a good hard look at itself and recall the sight of thrashing hapless dolphins chopped down ruthlessly before it feels the urge to lecture Hindus.