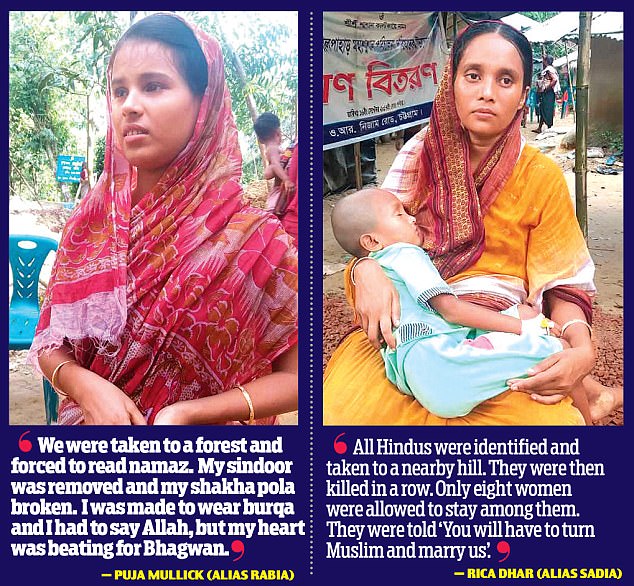 More horrific details are emerging of the chilling brutality unleashed on Myanmarese Hindus by the Rohingya Muslim jihadis who first committed mass murder of around 100 Hindus on 25 Aug and then abducted 8 young Hindu women and took them to Bangladesh.

After reports first emerged on social media and in Myanmarese outlets, which HinduPost has been reporting regularly over the last one month, mainstream media of Bharat seems to have finally woken up and decided to cover the plight of these Hindu refugees in Bangladeshi camps.

The Hindus in Bangladesh relief camps have become a soft target for those looking to enforce religious conversions on those vulnerable and alone. Hindu women, who have already lost their homes and loved ones, are now faced with the real danger of losing their identity, dignity, and way of life.

Hindu women are reporting that they are being forced to remove sindoor (a traditional vermilion red powder worn by married women along the parting of their hair) break their bangles, and marry Muslim men, converting religion in the process. Many of these women were forced to give up their Hindu traditions and read namaz (pray) five times a day.

The article talks about the trauma of one Puja Mullick whose husband was first killed by Rohingya terrorists, before she was abducted, forcefully converted to Islam and given the name Rabia, and brought to Bangladesh.

For some reason, the article claims that ‘Rabia is a Hindu who left Myanmar in hope of a refuge.‘ But the article then goes on to quote the lady herself describing how she was abducted and brought to Bangladesh! MSM crookedness dies hard. The article also continues to refer to Puja Mullick as Rabia…why use the Muslim name to describe the woman who was forcefully converted to Islam? Do the India Today journalists harbor doubts about what these women are telling them? Why is it so hard for liberal-seculars to digest what these poor, hapless Hindus are telling them?

Puja tells the journalist that her family was not killed by the army, but by men clad in black with their faces hidden, who were acting in the name of their religion. And she is not alone. Another lady says her husband and entire family were shot in front of her but she was left alive to live as a captive.

‘They took us to the forest and said I would have to read namaz or they would release me… My sindoor was removed and my religious shakha pola bangles broken.

‘I was told I would be allowed to live only if I changed my religion. I was made to wear burqa and stay with them to learn their traditions for almost three weeks.

‘I was made to read namaz… I had to say Allah, but my heart was beating for Bhagwan… My family started searching for me and came to know that I was living in a Muslim camp.’

The red saree is the only one she has now and her three-year-old son has no clothes at all.

Another lady Rica Dhar (28) was forcefully turned into Sadia. Struggling to feed her three-year-old, Rica narrated a similar tragic tale.

‘On Friday (August 25) they entered all the Hindu residences and attacked. First the mobile phones were taken away and then men were tied and beaten brutally. My husband worked as a goldsmith.

‘They took away all my jewellery and began beating me. All Hindus were identified and taken to a nearby hill. They were then killed in a row. Only eight women were allowed to stay among them… mostly young and beautiful.

Both Rica and Puja say there were six more women besides them who shared their fate. After they could not be traced anywhere in Myanamar or Bangladesh, they were identified at the Kotupalong Rohingya camp where they were kept under close watch by those who were executing this forcible conversion.

When asked, Bangladeshi government officials were clueless about what was going on. ‘We do not have any such information,’ said Md. Ali Hossain, deputy commissioner of Cox’s Bazar.

Hindu men hailing from the same Rakhine state went out in search of these women and allegedly faced torture themselves. Vijay Ram Pal says he was assaulted during his quest. Puja and Rica can now breathe easy to some extent as they have been rescued from their Muslim abductors and are in the Hindu camp for the past three days.

But the Rohingya Muslim jihadis who abducted the Hindu women after slaughtering their family were not content with just that – they understand how the global PR game is played and what they need to do to be seen as a persecuted community.

Hindu survivors of the jihadi onslaught who escaped to Bangladesh were ordered to say that Buddhists had carried out the massacre, as says Reuters.

Three Hindu women told Reuters that Muslims who abducted & brought them to Bangladesh after they submitted to convert to Islam under duress had ordered them to say it was Buddhist vigilantes who had done the killing. Yet, the Reuters article goes on to cast a healthy dose of cynicism on the whole episode with statements like – ‘why Myanmar’s tiny Hindu minority in Rakhine state got caught up in the bloodshed is not clear’, ‘different people have given different accounts at different times’, ‘While the accusations fly’….it is amazing how the global liberal media machinery manages to obfuscate Hindu persecution at hands of Muslim extremists time and again.