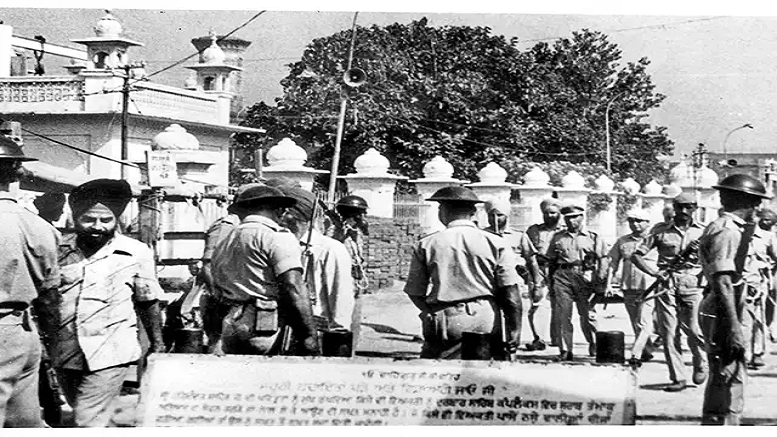 During the initial phase of my career as an IAS officer in Punjab, there were numerous occasions when we witnessed— rather detected—silent migration, if not exodus, of Hindu families out of the State, to Haryana and Delhi.

First was in 1987–1988, immediately after Surjit Singh Barnala government had been dismissed and President’s Rule was imposed. I was then SDM Samrala in district Ludhiana, a relatively peaceful place.

The first instance was when Hindu landowners in village Sherpur Bet, in Machhiwara block exchanged their agricultural land with Sikh landowners in Kurukshetra district of Haryana. The village is now in the newly-carved Machhiwara Tehsil.

What to me was personally very discouraging, as well as alarming, was the fact that the Hindu Sarpanch of the village, Kewal Krishan, who would openly sport a revolver on his person, and was leading the resistance against the terrorists, had planned the entire exercise.

We swing into action early, even before the IB reported the matter. After arduous negotiations and administrative assurances, we were able to convince them to reverse their decision, as also the exchange of land transactions.

In Ludhiana district, water-table was virtually at a few feet below the ground whereas in Kurukshetra it was far deeper. Maybe this also contributed a bit to the Hindu landowners reviewing their decision. We also acted swiftly in cancelling mutations of the exchange of land.

I remained posted as Additional Deputy Commissioner (Development) in Amritsar district from 1990 to 1992. I was to then continue as Deputy Commissioner/District Magistrate Amritsar from 1992 to 1996. Tarn Taran, now a separate district, was a part of our jurisdiction.

After the initial optimism created by the bloodless Operation Black Thunder in 1988, the situation had once again deteriorated, especially in the border districts of Amritsar and Gurdaspur.

Killings and kidnappings, followed by extortion of ransom, were a common and a daylight phenomena even in the heart of the Amritsar city. These were not restricted to Hindu families alone and well-to-do Sikh families were also targeted.

Many a time, these incidents of kidnapping/extortion were not even reported to the police and the matter was settled privately.

The Punjab Police led by late Mr KPS Gill, was doing its best to control the situation. It was actively assisted by Army as well as Central Paramilitary Forces.

Whenever terrorists were killed in police encounters, there an was outcry and allegation of fake encounters and extrajudicial killings were invariably made.

The civil administration faced the wrath of the people at the time of funeral of the civilians killed. We could do nothing more than empathise, apart from ensuring expeditious disbursement of the ex- gratia relief under the Government policy.

The families of Punjab Police constables and NGOs— most of them Sikh—were specifically targeted by the terrorists, often in incidents of brutal mass-killing.

The Basmati Rice Exporters were specifically targeted and many of them quietly set up plants in Haryana, around Delhi, even as the old ones in Amritsar continued to operate.

This turned out to be a boon in disguise, after the situation improved, and many of them came out with Public Issue of equity shares and are now global players.

A leading Hindu family, engaged in blanket and shawl manufacturing also began operations in Panipat, Haryana. They’d narrate how difficult it is to do business there, when no one was even willing to extend even petty business credit, to someone seen as a displaced person.

Many Hindu families, and even some Sikh families, tried to sell their residential houses, in some of the most prime locations of Amritsar city. There were no buyers. Some of the deals were clinched at literally throwaway prices.

Many Hindu families would wake to the horror of their houses bearing distinct marks, put by the terrorists, as properties identified for forcible takeover, following the impending exodus of Hindu families out of Amritsar.

Narsimha Rao Government at Centre, that came into power in June 1991, took a decision to conduct Punjab Vidhan Sabha elections, in Sept. 1991. Punjab had continued to be under President’s Rule since 1987 and General OP Malhotra, retired Army Chief, was appointed as Governor.

The venerable TN Seshan was at the helm of affairs in the Election Commission but this election had to be aborted as numerous contesting candidates were gunned down. Fresh elections were held in February, 1992 which witnessed a very meagre turnout.

The Badal faction of Akali Dal boycotted this election, while the tacit understanding was to allow the moderate Akali Dal, led by none other than Captain Amarinder Singh at the time, to win. However, the Congress party, led by Late Sardar Beant Singh emerged victorious.

It was neither the Central Government nor the State Government. It was not the Army, paramilitary forces, or the Punjab Police, or the civil administration. It was not Sardar Beant Singh or Mr KPS Gill. It was nothing and nothing but it was quite simply the unbreakable bond and unshakeable trust between the Hindu and Sikh families and communities, in the land of the Gurus and Saints. It was the resilience of the Punjabi community as a whole.

It was the firm belief in the common destiny of all Punjabis, in Punjab, an integral part of the Union of India. Punjab and Punjabiyat won.

(This article was compiled from the tweet thread of @kbssidhu1961)