What will it take for Amazon to stop denigrating Hindu deities? 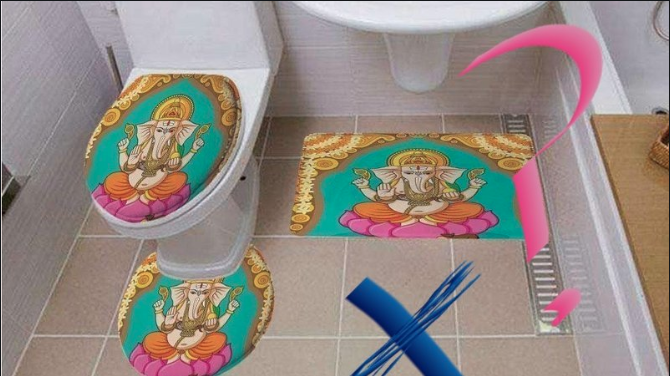 A petition, calling upon Amazon to remove the products, has garnered over 125,000 signatures in just a few days.

Long history of denigrating Hindu deities continues, must be challenged. No other major religion is so denigrated. https://t.co/3UCF5xSm2d: Amazon Stop insulting Hindus with Floor Mats and Toilet Mats with Hindu Gods. – Sign the Petition! https://t.co/f8uv3NrPDz via @Change

Taking cognizance of the  protests &  #BoycottAmazon calls on social media, most of the offending products listed by Amazon have been removed. “All sellers must follow our selling guidelines and those who do not will be subject to action including potential removal of their account,” the company said in a statement reported by Reuters.

In 2017, the Bharatiya government took Amazon to task after its Canadian website was spotted selling doormats resembling Bharat’s flag. External Affairs Minister Sushma Swaraj at the time threatened to rescind visas of Amazon employees if the doormats were not removed from its site. But the Government has yet to issue any strong statement against the Amazon products denigrating Hindu deities.

Despite such recurring episodes, it is natural to wonder why Amazon and other online retailers have still not managed to bar such products from their platforms altogether. The reporting of such instances in media is also interesting – for eg. this is the headline Russian outlet RT used –

Notice the quotes around the word ‘offensive’. Read between the lines and what the headline is implying is that the products aren’t truly offensive, it’s just a bunch of Hindus who think so. Would a similar belittling subtext have been added if the doormats and toilet seat covers had featured images of Christ, Mohammed or Marx? RT even labelled a new term ‘Hinduists’ to blackball the Hindus protesting against such anti-Hindu products!

More and more Hindus are protesting such casual Hinduphobia today than ever before. Yet, unless our action is organized, sustained & outcome-oriented, such episodes will keep recurring. It’s not enough to voice our outrage simply as individuals anymore.

We need to join existing Hindu activist organizations, or launch new ones, which will educate larger society and non-Hindus on basics of Hindu Dharma, demand mutual respect, expose anti-Hindu bigots, and develop the ability to dent the commercial interests of corporates who take Hindus for granted.

Every woke Hindu needs to dedicate time & money on a regular basis towards the Hindu cause, and consider it a personal mission to awaken more Hindus around them.