Simply Amul! – the politics of veganism 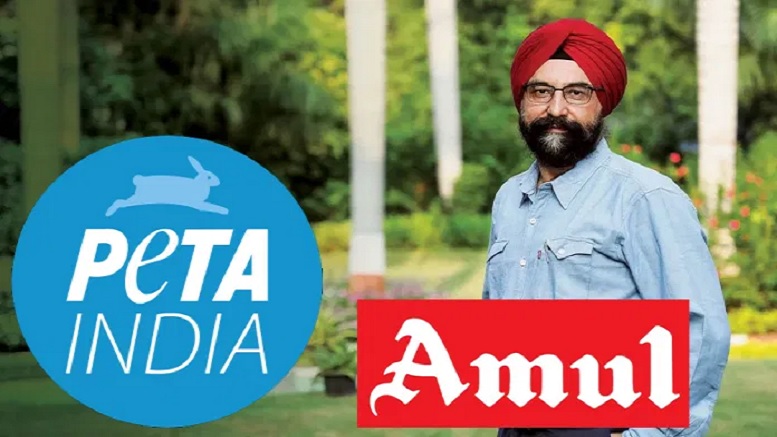 Manthan ( Churning, 1976),  the iconic film in Hindi by Shyam Bengal traces the growth and evolution of the  collective efforts of a group of  poor framers in Kheda district in Gujarat  who were fired by a  vision to act in ways that reflected the collective interests of society and their personal interests. The film traces the origins of the movement through its fictionalised narrative, which led to the setting up of a local milk cooperative, Gujarat Co-operative Milk Marketing Federation (GCMMF) in  Anand, Gujarat.  Popularly known by  its brand name Amul, GCMMF was founded in 1946 by Shri Tribhuvandas  Patel, a Gandhian, social worker and freedom fighter.

In a scene in the film, the local lynchpin tells the idealistic Dr. Rao, the protagonist  of the film, to stop meddling with the status quo (exploitation of poor farmers by middlemen) and confine  himself to “peripheral” issues such as health and sanitation! Dr. Rao’s  dogged persistence  is  testimony to The White Revolution in the country.

The film portrays how the  manthan (churning) between the forces of good and evil led to the formation of the Gujarat Co-operative Milk Marketing Federation and the rest as they say, is history!  Fittingly, Manthan highlighted the power of “collective might” and became the first crowd-funded film in the country, with the film being funded by 500,000 farmers who contributed Rs. 2 each!

Currently, GCMMF is jointly owned by 36 lakh milk producers in Gujarat, and is the apex body of 13 district milk unions, spread across 13,000 villages of Gujarat. Amul spurred the White Revolution in our country, which has made the country the world’s largest producer of milk and milk products. The country’s largest dairy brand, Amul, through its parent organisation, GCMMF, currently provides employment  to 100,000  farmers who depend on the cooperative diary sector.

In the days preceding the formation of GCMMF, the challenges and roadblocks that confronted the  pioneers of the White Revolution were local and internal such as exploitative businessmen,  local politicians and moneylenders. It was easy to identify the “enemies’ and craft appropriate responses to subvert the exploitation and rebalance it with equity and justice for all, especially the marginalised farmers.

Today, however, the “enemies” camouflage themselves and pose under  benign  appearances such as PETA (People for Ethical Treatment of Animals),  the  dubious US-based  global animal rights organisation with global branches. Over the years, PETA, through its Indian arm, PTA India, has been slowly but steadily encroaching the Bharatiya landscape, taking on its self-appointed role as arbiter, regulator and monitoring authority of the nation’s cultural traditions.

Supported by a cabal of   pseudo-secular liberals, powerful politicians, celebrities, and other dubious  animal rights NGOs, PETA India led  from the forefront in fermenting the Jallikattu crisis, as it sought to demonise the traditional  sport and seek its ban on the grounds of ‘cruelty to animals’. The cabal is also using the same modus operandi to sabotage  the Jaipur elephant rides (and  destroy the livelihoods of people dependant on it) with their doctored reports of  cruelty to the elephants.

“We need to ensure that no foreign  force will attack our culture in any form. This is where neo-Hindutva fails! Jallikattu temple elephants, Dahi handi, Holi colours, Diwali crackers, Rekhla, Khambala, cock fights and circuses… the list is endless… Once we become cultural orphans , we will become susceptible to conversions . Soon we will become a minority in our own country!” says Chennai-based activist S. Muralidharan, who was one of the pioneers in the Save Jallikattu movement.

PETA India is truly hydra-headed. Their compulsive,  tyrannical  fascination for controversy and  Break Bharat rhetoric has the potential  to destabilise culture and traditions—the bedrock of any country or civilisation. Recently, PETA India, demonstrating a sense of flagrant entitlement, offered “unsolicited advice” to GCMMF Managing Director,  RS  Sodhi,  asking him to  switch over to the manufacture of plant  based  milk, aka “vegan milk”  and  vegan dairy products, reflecting their so called philosophy of veganism, the philosophy and practice of abstaining from the use of  diary and meat products.  Vegan milk is an umbrella term referring to various kinds of non-dairy, plant-based ‘milks’ such as soy, coconut, oats or almond milk.

Social media users were outraged by PETA India’s entitlement and arrogance. PETA responded by tweeting,  “Would you drink dog’s milk? No. Why? Because nature made dog’s milk for puppies, cat’s milk for kittens, rat’s milk for their babies, cow’s milk for calves, and human milk for our babies. Nobody needs milk after infancy or the milk of another species.” This, not so incidentally, is the bedrock of  the philosophy and practice of veganism, which PETA India promotes as a solution to  greenhouse gas emission and global warming caused by industrial dairying and meat farming.

Sounding patronizing and sanctimonious, and citing the examples of global brands like Nestle that are transitioning to plant based products, PETA India, urged Amul “to benefit from  the booming vegan food and  vegan market, instead of wasting resources trying to fight the demand for plant based products that is only growing!”

A war of words ensued  on social media between  RS Sodhi and PETA India.  Rising admirably to the occasion, like a  King Cobra, attacked unprovoked, Sodhi defended in letter and spirit the heritage of dairying in the country (tracing it back to the times of Sri Krishna in the dwapara yuga, around 5000 years back) and the lives and livelihoods of 70 million farmers in the country, who contribute one-third of the country’s rural household income and 4 percent of the country’s economy!

In a well-crafted rejoinder, based  on scientific evidence, Sodhi refuted  refuted the claims of PETA India  about the suitability of their food choice. Plant based food products, reasoned Sodhi, are genetically modified, fortified with chemical and synthetic additives, laboratory produced, prohibitively expensive for the average consumer and driven by profits. He also highlighted that vegan milk (soy , almond, oats) has significantly lesser nutritional value (one-sixth to one-eight) the nutritional value of dairy milk.

Referring to plant-based beverage makers naming their products as ‘milk’, R S Sodhi had said such companies are encashing the equity of milk to sell their non-milk products. He had said that these products are nothing but genetically modified lab foods made out of chemicals and synthetic materials by big companies and MNCs.

“Indian dairy industry is a model of co-existence of humans and animals for centuries. But foreign-funded NGOs are running campaigns to tarnish the Indian dairy industry which unlike western world is not a factory farm industry. Cattle are part of a dairy farmer’s family, nobody tortures them”, he had said.

Earlier in the week, the Advertising Standards Council of India (ASCI) had dismissed a plea filed by PETA and two other organisations against Amul for saying that plant-based products can’t be called ‘milk’. Amul is running a ‘Myths vs Facts’ advertisement, where the company had said that “plant-based beverages are impersonating and masquerading as dairy products”.

ASCI had found that Amul’s ad was  factually correct, accurate and appropriate , as according to Food Safety and Standards Authority of India (FSSAI) rules, plant-based milk is not covered under the definition of ‘milk’. As per FSSAI guidelines, milk is considered as a vegetarian product. While plant-based beverages have proteins and beneficial minerals, however, most plant-based milks have lower protein content than milk, ASCI had observed.

S. Muralidharan, You tuber, activist and Founder, Indian Centre for Animal Rights and Education, Chennai, talks of the nexus between PETA and veganism. In a clear, crisp and concise video, he traces the coming together of these two entities as part of a global conspiracy campaign to undermine traditions and pave the way for a cultural and commercial take over—a point  reiterated by RS Sodhi.

“Veganism, according to me, is a form of mental illness because of its extrema irrationality and refusal to look at facts per se. Veganism  was promoted by the US based soya lobby in the 1990s to take on and take over the dairy industry worldwide by promoting soy milk and soya meat as dairy alternatives. Using explicit videos of slaughter-house animals and poultry being subject to cruelty, proponents of veganism began to ‘shock’ people not to eat meat , poultry and dairy products. Veganism was also positioned superior to vegetarianism. Meanwhile PETA  and Humane Society of America (HUS), a so-called animal rights NGOs, co opted vegans to further  their propaganda. We have seen them attack Bharatiya traditions.  And now, they are lobbying for a ban on domestic pets and anti-natalism, or stop having babies! Of course, PETA India has the support of  a powerful politician!”

The vice chairman of Amul has urged the prime minister to ban PETA.  Meanwhile, in the midst of the widespread manthan, looks like  it’s time for Manthan 2.0 – this time, indeed, the plot will be hyper complicated, wheels within wheels and the unravelling of the plot will involve people in high places nationally and internationally.

Why Hindus venerate cows, and what other faiths can learn from this millennia-old knowledge