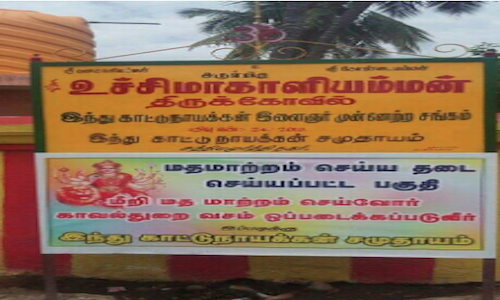 Villagers protested against forced conversion in Madurai, alleging harassment by Christians for not converting to Christianity. Residents of Sathyamoorthy Nagar in Samayanallur, Madurai, who predominantly belong to the Kattu Nayakar (Kattu Naicker) nomadic tribe, also staged a protest demanding action against a newly built prayer hall which is used to lure their children, who are then made to pose as orphans to raise money from foreign donors.

Madurai, Samayanallur, People gather in large numbers before a newly built Church and stage protests alleging that they force locals to convert, offering cash and gifts.

No action despite police complaints. pic.twitter.com/Nogb6AYUn1

The people of this tribe engage in occupations like fortune telling, selling beads, gathering honey and hunting. So they either have to leave their children at home with the grandparents/great-grandparents, or take them along to work. It is these children that are preyed upon by the missionaries.

What is intriguing is the fact that they are being targeted for conversion, even after they placed a board in their locality saying ‘Religious conversion is prohibited here’. They claim that police refused to accept their complaints about the missionaries harassing them by offering money and prizes despite continuous appeals by the Hindus to stop such activities.

A nomadic tribe, these Hindus have largely been neglected by the government and are not able to access the schemes for the underprivileged or provide proper education to their kids as it needs caste certificates. Hence they are vulnerable to the missionary predators. They have complained to the respective offices regarding missionary harassment and exploitation in the past, which seem to have fallen on deaf ears.

‘Hindu Kattunayakan tribe of Sathyamoorthy Nagar in Samayanallur petitioned the district collector to act on the people who earn money through converting their children,’ Dailythanthi reported last year.

While this poor Hindu tribal community has been facing harassment for resisting conversion, the neo-converts led by one Peter Krishnan who is a pastor of ‘Gypsy Ministries’ that targets the nomadic tribe for conversion, gave a petition to the Collector alleging that they are being harassed by the Hindu community.

This pastor appears to be the one running a racket of luring the Hindu children with food and other things and then posting their pictures as orphans or destitutes, to raise money from foreign donors. This ‘Krishnan’ claimed that out of the 500 families in their area, 100 follow Christianity and that they’ve been excluded from the society for doing so. He also said that they ‘convene to talk’ which is misconstrued as a means for conversion.

Pastor Peter Krishnan runs a ministry named ‘Yesu Nallavar Pudhu Vazhvu Uzhiyangal’ which roughly translates to ‘Jesus is Good New Life Ministries’. His website gypsyministries.org (site doesn’t load now)  had photos of children being fed, which the Hindu parents accuse is a way of luring the children post which they are brainwashed to convert and also presented as ‘orphans’ to raise funds for their upkeep. 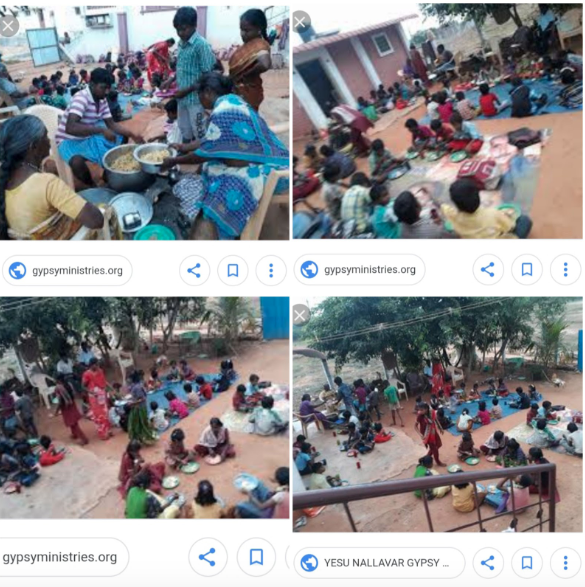 Here is a mother crying her heart out that their children are being enticed with Biryani and other things when the parents leave them to go out for work. She laments that they’re being harassed non stop with promises to make their life better if they convert, and pelted with stones if they refuse.

We are nomadic fortune tellers, we live here for ages & when we go away for a living, Church forcefully takes our kids to Sunday mass, offers them biryani, makes money showing them as orphans.

Forces us to come to Church when our husbands are away, if we refuse, they pelt stones pic.twitter.com/5Rb7ry47QV

Meanwhile the Christian community has escalated the issue by bringing in all the anti-Hindu (‘secular’) political parties like Congress, CPM, VCK, CPI, SDPI (political wing of the Islamist terror organization Popular Front of India), Manithaneya Makkal Katchi, MDMK, Naam Tamilar Katchi and controversial NGOs such as People’s Watch (a unit of Centre for Promotion of Social Concerns -CPSC- whose FCRA license was cancelled in 2016 following adverse intelligence inputs) in support of them.

Christians have alleged that they are not allowed to enter or use their hall, but the real issue is that they use the building as a conversion factory to which the Hindus object. It is a tested method of evangelists to use small houses, tuition centres, tents, even huts in some cases, as prayer halls on weekends in the beginning, and later plant a church (once they receive sufficient amount through FCRA) to harass neighbouring Hindus and lure or force them to convert.

This has been effectively prevented in recent years by organisations like Hindu Munnani, as it is illegal to use an existing building or construct a new one for religious purposes without obtaining prior permission from authorities. This has irked the evangelists big time, and they have been crying ‘persecution’ over this. Left-leaning newspaper The Hindu reported thus on the issue –

‘Representatives of People’s Union for Civil Liberties (PUCL), Madhaveri Edhirppu Kootamaippu, People’s Watch and SOCO Trust, who took part in the fact-finding mission, said that there were simmering differences between the two groups since 2012. However, tensions flared up when Hindu Munnani hoisted its flag at the village entrance.’

If hoisting a flag can flare up communal tensions, what could comments like ‘Your God is a false god; It is just stone’, or the constant shouting from prayer halls that ‘only their God is the true God’, do to communal harmony, is left to the readers to decide.

A Christian mouthpiece Religion Unplugged rues that “In Tamil Nadu, a 1972 building code and 1994 panchayat (local self-rule) building rules require local government approval to build a structure used for public worship or religious purposes, and approval can be denied if the government believes public peace and order will be disrupted. Hindu fundamentalist groups have shifted their strategy from violence to a more coordinated effort to use building regulation laws to shut down churches, especially in remote areas.”

So the Christians allege the involvement of Hindu Munnani members over this issue, and have enlisted the support of Alliance Defending Freedom, a radical American-origin Christian legal advocacy group that won the case against Himachal Pradesh government in the case of anti-conversion law, and which has a perfect success record of the cases it takes up in Bharat.

SOCO trust mentioned in The Hindu report is another anti-Hindu NGO that receives funds from ‘Action Aid’, which makes one wonder about the legitimacy of the fact finding mission by these Hindu hating organisations. Hindu Munnani is accused of running a kangaroo court to excommunicate the converts and fining those who communicate with them upto Rs. 50,000.

Local Hindus have refused these charges and said that they don’t communicate with the converts because they spoke ill of Hindu gods and provoked them. The vision of Pastor Peter Krishnan’s ministry is to ‘preach the gospel to every gypsy people… bring them toward the Lord Jesus Christ’ and the targets are the ‘children of Gypsy people’ as per their website.

CNN News18 has reported the issue as one of ‘Christian converts facing social boycott for embracing Christianity 35 years ago’. In the report, converts allege that 30 families returned to Hindu Dharma due to ‘coercion’. One convert alleged that even his wife, son and other family members don’t even look at him and say that they’re ashamed of him.

When questioned by News18’s reporter, the village head Azhagar Pandy said, “We go to their place of worship and eat. Will they come to our temple and have our prasadh? They say our gods are mere stones and theirs is the real one. Conversion is humiliation, but returning to Hinduism is self-pride. Neither are we forcing them to come back nor harassing them.”

A main problem nomadic tribes like Kattunayakars face is that their children are snatched from the parents citing laws like Commissions for Protection of Child Rights Act -2005 & Right To Education Act-2009 (both introduced by Sonia Gandhi’s UPA-1 Government), and placed in predominantly Christian child care homes by predominantly Christian Child Care officers. Here is an example of Kattunayakan children who were placed in an ‘orphanage’ against their wishes, escaping to find their mother but then the police found them and produced them in the court which ordered them to be handed over to the District Child Welfare Committee.

More such tragic cases can be read in this twitter thread-

+Answers to the Quiz.
A collection of new stories/threads-based-on-them.
(1) Two indep. news stories in two threads=>https://t.co/oy4JquDBIk

If these heart-rending stories remind you of the way aboriginal/native children were snatched from their parents by White colonial settlers in Australia, America etc. to ‘civilize the savages’, you are absolutely right. The destructive influence of Christian missionaries on the lives of nomadic tribes & native people is a universal pattern – and the secular state in Bharat today is in many ways playing the role of a colonial power with the ‘majority’ Hindus of this ancient land.

People would have several questions
a) Why do children with parents get put in orphanages?
b) Why do these kids /1 https://t.co/PaUZQARCw9

HinduPost has time and again reported the physical, mental and sexual abuse children face in Christian child care homes and orphanages. In the end, this small nomadic tribe and the handful of Dharmik fighters of Hindu Munnani are facing the battle against a ruthless, globally-connected missionary opponent who is hell bent on enforcing their exclusivist religious view.