Know how Hindu institutions, Gurus have donated resources and services to fight Covid-19 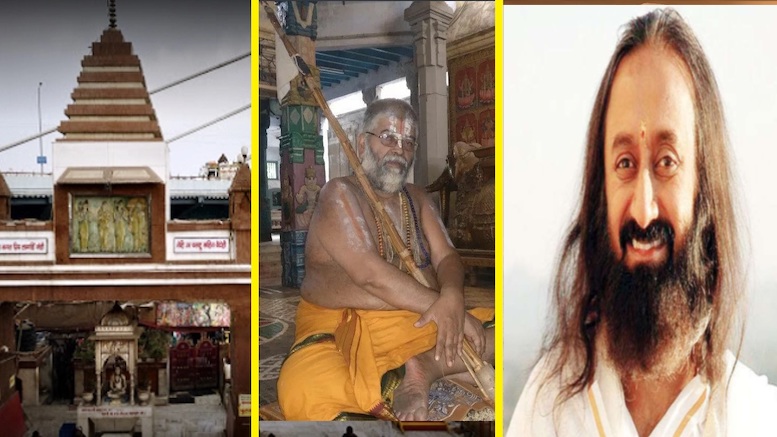 All our lives, Hindus have been shamed for ‘wasting money’ in milk, honey, ghee for Shivratri, fruits for prasad, and the donation in the hundi or daan-peti which we are told is taken by ‘greedy pandits’. But while such self-hate is prevalent among urbanistas, Hindus & our institutions have always been the first to give generously towards social causes. Where they have failed is to publicize these efforts since practising Hindus consider seva to be so intrinsic to their faith that they are puzzled on why it needs to be marketed.

Now that the country is challenged by the deadly Covid-19 pandemic, Hindu temples, spiritual and religious gurus, and organizations have come forward to support society and government.

A donation of 1 crores rupees has come from Patna’s Mahavir Mandir Trust. The donation was made to the Bihar Chief Minister Relief Fund to help the state fight the pandemic. Acharya Kishore Kunal, secretary of this trust that manages a renowned temple dedicated to Sri Hanuman in the city, conveyed that the contribution is aimed at strengthening Bihar’s efforts to contain the outbreak and provide food for the poor, while assuring help in other ways if needed.

Siddhivinayak temple and Lalbaughcha Raja in Maharashtra have also reached out to the state CM, offering their assistance and supplies during this time of need. Ensuring that our front-line warriors work hassle-free, Temple trust of Siddhivinayak distributed food and bottled water to Mumbai police personnel.

To support daily wage earners during lockdown,@ArtofLiving is providing a family's ration for 10 days to a million families across the country.I appreciate the whole film & TV fraternity in joining this initiative. To contribute, visit: https://t.co/WcFDADCGm1#iStandWithHumanity pic.twitter.com/Y9hO4DuJ1K

The middle-class may still solider through the three weeks of country-wide lockdown, but it will be trying times for the daily-wage earners and those who belong to the base of our economic pyramid. Keeping their plight in mind, religious guru, Sri Sri Ravi Shankar’s organization, the Art of Living, has mobilized 12 trucks loaded with 108 tons food materials to be distributed among the poor families. Next, they have started a campaign to provide ration for 1 million indigent families for 10 days through their organisation IAHV (International Association for Human Values). Sri Sri shares the message that the poor of this country should be assured that humanity is still alive, and the government and people of this country will do their bit for them.

Isha Foundation of Sadhguru Jaggi Vasudev came forth to support Tamil Nadu government and presented its facilities in Coimbatore to be used for medical purposes. They have committed volunteers, if needed, in government hospitals. Anticipating that hunger and lack of employment may become key issues, the founder of Isha Foundation requested millions of its members to take care of at least two members from economically vulnerable classes.

ISKCON Food for life is currently distributing 60,000 plates of meals to those in need in Delhi alone. ISKCON is gearing up to distribute pan India and in couple of days, will be preparing meals for approx 1.5 lacs people pan India. And will gradually scale it up further. pic.twitter.com/y08u9iC6IY

In Delhi, ISKON food for life has taken up to distribute 60,000 plates of meals to the poverty-stricken and is gearing up to provide similar services pan Bharat with plans of reaching out to 1.5 lakh people in the next couple of days. As time passes by they will scale up this outreach.

Mannargudi Jeeyar Swamigal is feeding the homeless of Srirangam from the Matham. He requires Rs 1.5 lakhs to provide 2 meals of rice to 200 people twice a day

Sri Vaishnava sannyasi, Sri Chendalankara Sampath Kumara Ramanuja Jeeyar, operates with a staff of 2 cooks only. Despite the paucity of resources, the saint manages to deliver cooked food for poor 200 people. He requires 1.5 lakh rupees to continue with his selfless efforts and has initiated crowdfunding for the same. You may contribute as your heart pleases by following the link given in the tweet embedded above.

Akshay Patra Foundation distributing about 30, 000 food kits in the next few days to the vulnerable families and will scale it up to 1 lakh at the earliest. The dry ration, garam masala, oil, vegetables, pickles and so on. Each kit can feed an adult twice a day for 21 days. pic.twitter.com/knhjxjcO6t

Detested by ‘secular’ journalists like Faye D’Souza, The Akshay Patra Foundation, known for serving satvik food in Mid-day meals to children Bharat-wide, has stepped forward to collaborate with the government in offering food relief in numerous locations. Karnataka Governor Vajubhai Vala acknowledged Akshay Patra’s efforts during a video conference with President Ram Nath Kovind calling out how the organization is actively involved in distribution of food all over the state.

Often likened to the Islamist terror organization ISIS by ‘seculars’, the RSS has devoted itself to the service of humanity in testing times. Following protocol and necessary medical precautions, the Swayamsevaks are sanitizing cities and towns, distributing ration and creating mass awareness about the epidemic among the poor. They have also made masks available to the deprived, and assisted police & other first responders in various states like Odisha, Madhya Pradesh, Kerala, and Karnataka.

Jhandewalan Temple Trust and Sewa Bharati volunteers have started a community kitchen to feed 30,000 needy people a day in Delhi. Shockingly, left-liberal propagandist media outlets like AajTak tried to give the credit for this kitchen to Delhi CM Arvind Kejriwal, the man responsible for triggering the exodus of lakhs of migrant labourers from Delhi.

All the Hindu institutions enlisted above, have extended their selfless support to every needy being in the country, and unlike missionaries, they are not running any hidden agenda in lieu of this service. And these are just a few samples – many other temples, organisations and ordinary Hindus are rising to the challenge of serving humanity in this unprecedented crisis.

The leftists don’t get enough with deriding the industrialists of Bharat who have always added to economic growth and created jobs. Today, as the communist keyboards warriors denounce every effort made by the government (except for their ‘hero’ Pinarayi Vijayan), Anand Mahindra, Chairman of the Mahindra Group has offered to convert plush Mahindra Holiday resorts into temporary care facilities. Anil Agarwal of Vendanta Resources Limited has contributed Rs. 100 crores for the cause on the day of Junta curfew, and Ratan Tata has promised all workers and daily wage-earners full payment during this economic crisis, and a sum of Rs. 500 crores to fight the Wuhan virus.

Mukesh Ambani, hated the most by left-liberals, has dedicated a 100-bed center at Mumbai’s Seven Hills Hospital for patients who have tested positive for Covid-19. After extending a 5-crore donation to the state CM fund, Reliance Foundation Hospital, in collaboration with NGOs is now providing feel meals to poor people across cities. Reliance Industries has also announced a donation of Rs. 500 crores to the PM-CARE fund.