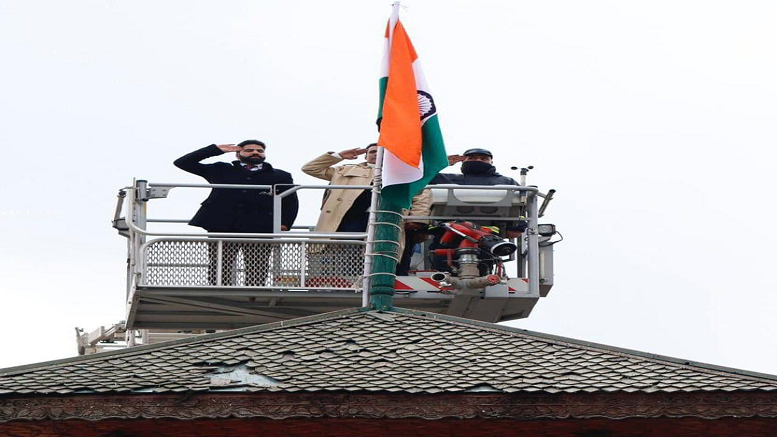 The nation celebrated its 73rd Republic Day with traditional gaiety during this year’s ‘Amrit-Mahotsva’ in regard to the 75th year of Bharat’s Independence. The whole atmosphere was overwhelmed with the usual fanfare, marching parades and unfurling of the national flag at all important places throughout the country.

Though the main ceremony at National War Memorial near India Gate followed by the ceremonial parade at Rajpath in New Delhi was the star attraction of the day, yet functions held at district and state headquarters also attracted attention of the common masses.

It was a welcome move on behalf of the government of Bharat to merge the Amar Jawan Jyoti with the eternal flame at the National War Memorial in the sprawling lawns near India Gate well before the Republic Day. It was done on the 125th birth anniversary of Netaji Subhash Chander Bose on 23 January 2022.

The move is a clear departure from the colonial legacy since India Gate was created by the Britishers as a memorial of Bharatiya soldiers killed in the first world war and the Third Anglo-Afghan war. They fought the wars on behalf of the Allies under the command of the colonial Britishers.

National War Memorial is dedicated to all the soldiers of Bharat who made their supreme sacrifices while defending the unity, integrity and pride of Bharat before and after the independence till date. It is the indigenous memorial of Bharat dedicated to the memory of our great and brave soldiers. On all occasions of national importance, National War Memorial will be in focus and will thus receive the attention it deserves starting with the ceremony held on this Republic Day.

Besides these main functions held in the capital of the country and in other states and UTs including Jammu and Kashmir Union Territory, some unusual and special ceremonies were also held in the UT of J&K. In this context, the function held at Lal Chowk, Srinagar on the Republic Day was also one of such historical events organised this year in the Kashmir valley. The National flag, Tricolour, was unfurled on the top of the Clock Tower at Lal Chowk, Srinagar by the natives of the place with the help of the civil and police administration.

In this connection, we are reminded of a similar successful effort put in by Dr. Murli Manohar Joshi, Narendra Modi, Krishen Lal Sharma and the others, the then BJP leaders, who unfurled the Tricolour at Lal Chowk on 26 January 1992. Thereafter, during the last three decades, some more attempts were also made to do the same but due to a number of reasons, these couldn’t be the successful efforts. However, this time the history was created that will most probably get repeated on every Republic Day henceforth.

While the patriotic people in whole of the J&K were expressing their happiness on this event on the social media, the former CM of J&K, Omar Abdullah tweeted questioning patriotism and nationalism of those who unfurled the tricolour on the Ganta-ghar. In his opinion, the flag should have been there up to the sunset. This author tweeted back to him saying “no lectures please”….adding that, “We’re reminded of 2011 Ekta-Yatra led by Anurag Thakur, Arun Jaitely, Sushma Swaraj & Anant Kumar to unfurl Tricolour at Lal Chowk Srinagar when your govt arrested them at Lakhanpur. Yes, I was also among thousands of volunteers who were arrested on the occasion”.

The participation of young Kashmiris in the programme particulalrly at Lal Chowk signifies a visible and welcome change in the Kashmir valley. The social media was abuzz with a lot of discussion and debate on the occasion. There were debates, webinars, discussions and other programmes going on all formats of media including the electronic media, digital media and social media. The print media was also seen greatly involved in the debate on the occasion contributing positive aspects on the occasion. Indeed it is a very healthy sign in context of the socio-political scenario of the UT.

This visible and stark change was also observed on the Kashmiri Pandit Holocaust Day on 19th January this year. The debates held on this occasion by various media platforms, institutions, associations and social groups endorsed the facts of KP genocide and ethnic cleansing on 19 January 1990. A vast number of young Kashmiri Muslim boys and girls participating in the debates rejected the facade of Jagmohan blame-game and even went to the extent of accepting the exodus of the Pandits as a serious failure of the majority community in Kashmir. Some even went to admit that unless the majority community in Kashmir comes forward to apologize for its failures of 1990 in case of the Pandits, the phrase, ‘Kashmir is incomplete without Kashmiri Pandits’ will just remain on the lips alone. They even called KP exodus as a severe blot on Kashmir’s secularism and democracy.

Besides this, a lot of developments took place this time and the KP Holocaust found a voice at an international level too. Mary Millben, the celebrated US singer, issued the following statement on the occasion on Twitter: “Religious persecution continues to escalate acoss the world. Today we remember the horror of Exodus Day, the exile of Kashmiri Pandits -due to genocide and ethnic cleansing from Kashmir at the hands of Islamist terrorists. My prayers are with the Kashmiri Pandit community as many continue to mourn the loss of loved ones, homes and cultural presence”.

The film, The Kashmir Files, made by the noted filmmaker Vivek Agnihotri on the plight of Kashmiri Pandits also made a great impact in connection with the Exodus Day in US and at other places world wide, followed by its formal release on this year’s Republic Day. This is surely a huge development in the field of information, broadcasting and knowledge.

Bharatiya news channels also played comparatively a positive role this time by projecting the truthful picture of the gory happenings in Kashmir with the Kashmiri Pandits. This change was observed even in the Kashmir media circles as well.

It is a hard fact that Pakistan was involved in cross-border terrorism in the valley, but the sway in the society in Kashmir was also a harsh reality of the bad times. The Kashmir society has a bounden duty to shun terrorism which remains unabated particularly with the factor of soft and target killings alive. The youngsters in Kashmir valley have both the opportunity and the ability to change the scenario in the light of the vision and hope of ‘New India-New Kashmir’.

While Pakistan has always been a concern for Bharat, it (Pakistan) has in its National Security Policy this time sought peace with its immediate neighbours, and said that ‘they are not seeking hostility with India for the next 100 years’. It seems a ‘departure’ from its traditional stand ‘to fight with India for 1,000 years or to give it 1,000 cuts’.

However, the country has clarified that it has no plans to sort things with India until PM Modi is in power. This reflects an unfortunate mind-set of the Pakistan regime. Moreover, Pakistan also is planning to enhance trade and business ties with Bharat without chasing a final solution to the Kashmir issue. This seems quite a wise approach of the Pakistan establishment that needs to be properly understood by the people in Kashmir.

However, the hawks in Pakistan continue to vitiate the atmosphere. The statement of the Pakistan’s Jamaat-e-Islami chief Sirajul-Haq is a pointer in this direction. He said recently, “the unity of the Ummah is the solution to all problems. The problems of Kashmir and Palestine can be solved immediately if the Islamic countries raise their voice with full force”. He continues to harp on the old political narrative notwithstanding the fact of friendly relations of Bharat with the leading Muslim countries in the world.

Statements like the above have potential to vitiate the atmosphere further and add confusion and chaos to the existing scenario.  It is for the youngsters, intellectuals, media men and women and the political and social activists not to allow any sort of sway of the society towards a wrong direction that might pave way for further death, destruction and mayhem. In fact they need to interpret the positive changes in an appropriate manner and thus give a lead to the society to bring it out of the crisis.

All changes need to be focussed on the welfare and goodness of common masses. Changes in Kashmir are no different. Sustaining positive changes with consistency and bidding farewell to violence of all sorts can build a New Kashmir in ‘New India’ for the generations to come. It is verily now or never…..!