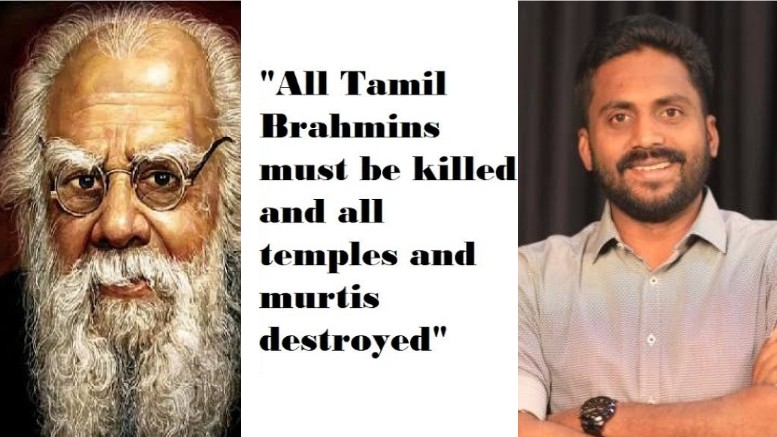 A DMK spokesperson has openly called for the genocide of Brahmins on Twitter. Following in the footsteps of Periyar aka EV Ramasamy, he said that the former’s genocidal speeches should have been realised by Shudras. This comes in light of an anti-Hindu anti-Brahmin event in Google being canceled and Periyarists descending on its CEO Sundar Pichai‌ for refusing to allow division and rancor among the employees.

The spokesperson of DMK, Rajiv Gandhi, ironically named after the late Kashmiri Brahmin PM Rajiv Gandhi, had tweeted in response to a maniacal speech by Periyar being shared on Twitter. In a public speech in 1973, EV Ramasamy had called for the genocide of Brahmins saying that even though it would be a legal offence, Brahmins must be killed.

He said, “That legal offence and all is humbug. We can’t be bothered that it is legally wrong. We have to come to this conclusion. Wherever we see a temple, we must go inside and break all the idols inside. Wherever we find a Pappaan (a slur for Tamil Brahmins), we must kill and destroy him”.

o whip up the emotions of the crowd he said, “He has done like this to us. He has come to this good position by doing these kinds of things only. We must also do such things to him (Tamil Brahmin). A few of us (non-Brahmins) would have to die for the cause. If one Tamilan (non-Brahmin) dies for one Tamil Brahmin, only 3 of us will die out of every hundred”.

The video was quote tweeted by self acclaimed political commentator Sumanth Raman who believes that the wokes have no idea of such calls of genocide made in the past. Rajiv Gandhi, the DMK spokesperson replied to his tweet saying “If Shudras had done what Periyar said that day then there wouldn’t have been a need to beg for justice, rights, education, employment and equality from the likes of you. You, who are just 3% of the population, still occupy everything in some spaces”.

As if celebrating Periyar, the genocidal maniac isn’t enough, now that they are back in power DMK party men and sympathisers want to wipe out an entire community by following his words and realising his dream of a Brahmin free world. We say world and not TN because these rabid hate mongers are harassing Brahmins working in foreign countries in corporate companies like Google, Microsoft, etc.

It should be noted that party men and sympathisers celebrated and gloated about the 100% non-Brahmin assembly after the sole Brahmin MLA Natarajan(ex-IPS) from ADMK lost in the 2021 assembly elections. The presence of people with such mentality being in power and openly calling for a genocide shows that a holocaust is waiting to happen unless Tamil Brahmins migrate to other parts of the country or foreign countries.

But then the toxic ideology is spreading to other states as well and trying to root its tentacles in foreign countries through woke sympathisers. Dravidianists in a UK university organised a conference to give a whitewashed view of EV Ramasamy to spread the genocidal ideology. The ones in the US went a step ahead and enacted a drama where they made kids forcibly remove janeu from other kids disguised as Brahmins.