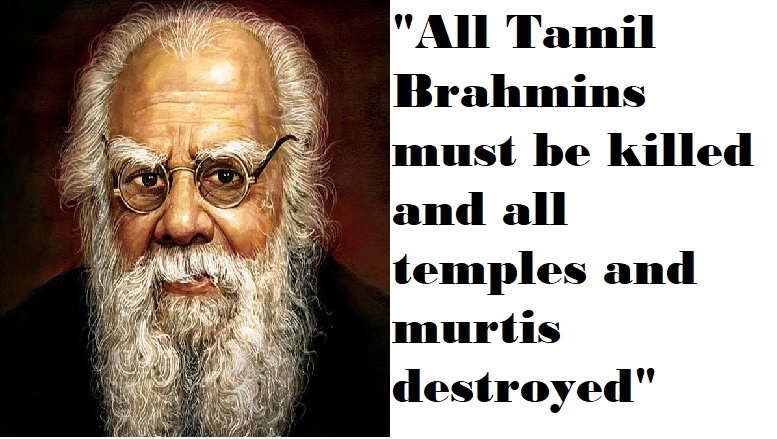 The University of Wolverhampton, UK is holding a conference on “Anti-Caste Thought: Theory, Politics and Culture” where the thoughts and works of Periyar EV Ramasamy will be discussed. The project ‘Freedom from Caste: The Political Thought of Periyar E.V. Ramasamy in a Global Context’ , as a part of which this conference is being held, projects EV Ramasamy as a champion of anti-caste movement, women empowerment and equality.

Karthick Ram Manoharan, an academic at the University Wolverhampton has organised this conference. He is a fellow of the European Union Marie Curie fellowship and has been translating the speeches and essays of EV Ramasamy. The ‘Periyar Project’, “an academic forum on Periyar” run by Karthick paints a whitewashed image of EV Ramasamy and gives a glimpse into what could be the context and concept of this conference.

The Periyar Project has a translation of EV Ramasamy’s conversation with Gandhi about abolishing Hinduism and Brahmins. It is left hanging where Gandhi says that he agrees with EV Ramasamy to an extent and wants to further discuss the subject. It appears the ‘academics’ want to utilise the popularity of Gandhi among the western audience to push Ramasamy’s anti-Hindu propaganda. Majority of the translation works of the project contains Ramasamy’s thoughts on eradicating “Hinduism”, its rituals and gods.

Some Hindus have written to the university’s Chancellor, describing the real nature of EV Ramasamy and highlighting his anti-Semitic stance. The project speaks highly of Ramasamy as anti-caste, anti-superstition and women rights activist and reformist. Periyar did say all those things translated by Karthick Ram Manoharan but he also said a great many things that invited violence on a specific community and derogated women in the worst way.

While he propagated that the institution of marriage is a means to enslave women, he himself married his own adopted daughter. Periyarists in their efforts to make EV Ramasamy “a global thinker”, present only one side of the coin to the non-Tamil audience in the hope that they’ll not discover the other side. For example this academic from Norway learns from Karthick Manoharan about Periyar. But he has no clue what the latter translates is not all that EV Ramasamy said and did.

What the Periyar Project says in English

“We are only against Brahminism and not the Brahmins”

“Like men, women should be given training to become physically strong. If women want to live an equal life with men, it is very important that they have the right to choose to pursue an education or a job as per their desire and talent”

What else Periyar said in Tamil

“If you spot a Brahmin and a snake at the same moment, kill the Brahmin first”

“They(Hindu women) go to temples to rub against strange men”

They hide the fact that EV Ramasamy was an anti-Semitic, and till today his comparison of Jews with Brahmins is used by his followers to demonise the later and call for their annihilation. Only his conversations and speeches about why Hinduism and Brahminism should be done away with are translated by these ‘scholars’. Let us see what all he said about Jews and how anti-Brahminism is similar to Nazism.

What Periyar thought about Jews and Brahmins