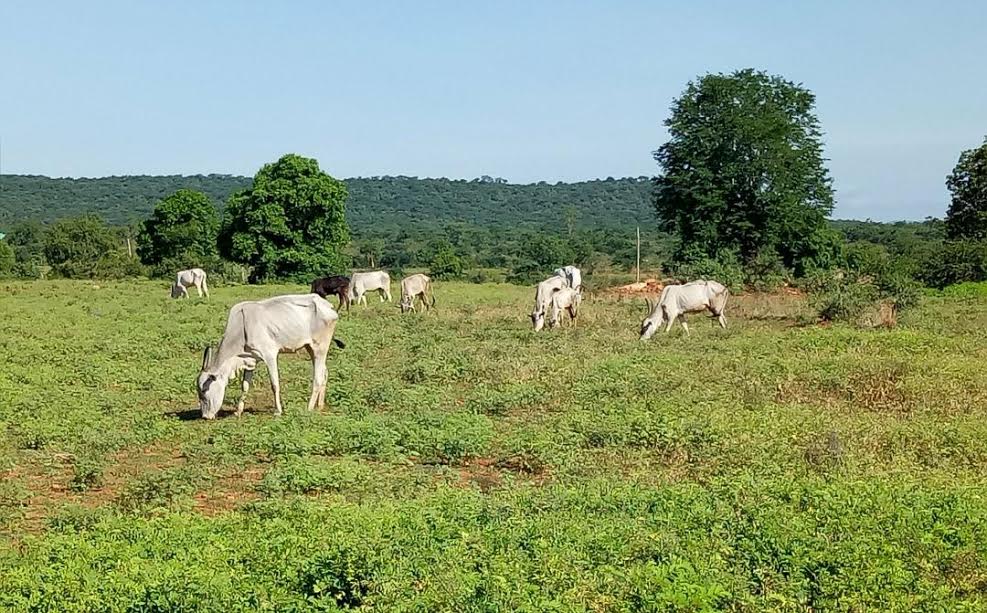 Prayer is doing good deeds selflessly,
Prayer is helping an old man crossing the road,
Prayer is wishing someone good from the bottom of heart,
Prayer is not just sitting and praying in front of God, but also wishing and doing good for others selflessly!

The mass prayer in an organized way has the power to get the almighty here on earth.

Yes the above sentence has been proved right at MaleMahadeshwara Hills which is witnessing healthy rainfall since couple of weeks. People here say they are not used to rains in June-July month. According to them rains start at this region usually from August and since last 3yrs they have hardly witnessed any rain. Eventually green has started to grow and cows are getting their ever natural fodder!

What caused rains couple of months early, which too in a drought hit area?

As you all aware, Chamarajanagara District of Karnataka has a hill range called MaleMahadeshwara Hills, which has around 180 villages surrounding it. Around 30,000 cows were saved from death by a huge campaign called #GouPranaBhiskha which was supported in social media by #GiveUpAMeal team. The campaign was announced by Revered Guru Shankaracharya Sri Sri Raghaveshwara Bharati Swamiji on the holy day of Ugadi. HH RaghaveshwaraBharathi Sri called the citizens of the state to sacrifice part of our life to give life (fodder) to the cows, which are staring death on the hills of Malemahadeshwara (in short – MMHills). 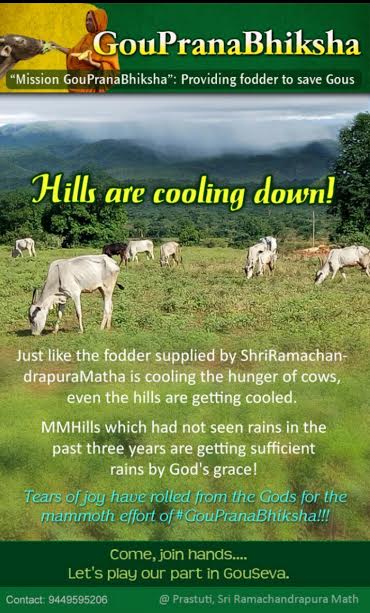 The whole idea was (i) to donate the savings made by ‘Skip a meal every week – and Simple Food-Simple life’ (ii) To hit streets seeking #GouPranaBhiskha  (seeking alms of life for cow) i.e. visiting shops/houses on the street to ‘beg’ help for supplying fodder to those cows. The response was amazing. People, cow lovers came in with huge support, thousands skipped a meal every week,  family events became simple, children declared they will stop consuming ice-creams/chocolates for 3 months, few hundred people sacrificed their jewelries – all the savings were donated for the fodder i.e. to be supplied to cows at MMHills. These contributions helped to purchase thousands of tons of fodder.

And hundreds of selfless volunteers struggled on ground to ensure the money donated served the purpose. They have put tremendous effort in making sure those cows get their share of everyday fodder. And then social media campaign called #GiveUpAMeal (in line with the idea of skipping a meal every week) where in like-minded people from across the country and outside extended their helping hand in a big way! We successfully reached One million people in one of our campaign days. We also trended among top 5 at national level.  On the whole, people have responded in a very positive way. Last but not the least the media of every kind – print, TV, news blogs and portals, supported us right from the beginning by spreading the words about this huge campaign.

#GiveUpAMeal and #GouPranaBhiskha are two great concepts. These awaken the inner self among us, making humans more humane. It keeps on reminding us that protection of the Mother of World, the cows, is our responsibility. Thereby it motivates us to indulge in this activity. The pathetic situation of those cows which were starving for months on end can be understood only by being hungry for some time. This is the idea behind #GiveUpAMeal and donate the savings. On each fasting day, it reminds us our responsibility of protecting those cows. Donating such savings to purchase food (fodder) for cows makes us remember that it is our responsibility, even at the cost skipping our food, to protect those cows which nourish us lifelong.

#GouPranaBhiskha this involves cow lovers going to streets and literally begging to seek help to feed those cows.  Keeping our selfishness aside and ask help for protecting cows, is a way to eliminate our ego. It teaches us a lesson of ‘live or to let live’, that we should let go our ego.  We were fortunate enough to be involved in this sacred service of cow as well as learning lessons for life under the holy guidance of Guru Sri Sri Raghaveshwara Bharati Swamiji.

Pure determination and selfless efforts are always backed up by divine power to accomplish things – fortune favors the brave. People from all streams of life joined hands irrespective of religion/caste/political affiliations. Ex-CM Sri B.S.Yeddyurappa ji who was impressed by our #GiveUpAMeal campaign invited us for a discussion about the issue. When we met him and discussed, he not only assured us he will make efforts for the logical end of the issue, but also announced a donation of Rs 10 lakhs on the spot. He also called upon the citizens of the state to support this noble cause. Veteran Actor Jaggesh, Actress and spokes person Malavika, Actor Couple Yash-Radhika, Senior Actor/director/producer S.Narayan, MLA C.T. Ravi, MP Suresh Kumar, Sharavana of JDS, Padmashree Chittani Ramachandra Hegde and many others joined from all walks of life at all 3 platforms : on ground, Social Media and Streets.

Around 3050 tons of fodder has been supplied for over 58 days on daily basis. Minimum 20,000 to 25,000 cows have been protected through #GouPranaBhiskha. It is not just supplying fodder, the cows were very weak. Few cows succumbed to death on their way to eat fodder that is distributed. They did not have the energy to chew the fodder. Weak cows were given medical treatment free of cost. Efforts of volunteers who are distributing fodder, sacrifice of people who gave up a meal every week, those who donated their jewelries, luxury foods etc, like-minded people in social  media making #GiveUpAMeal campaign throughout, organized attempts in #GouPranaBhiskha – all these have reached almighty in mass, which appears to have satisfied him looking at the healthy rain fall and healthy growth of greenery. The farmers are happy and satisfied with the developments and they themselves informed us that Cows are getting natural fodder now and no need to supply from now on. Upon the request from farmers and cow owners, we have almost stopped supplying fodders except to 2-3 distribution centers. We are very satisfied with the fact that we were able to supply fodder until farmers themselves informed us regarding natural fodder growth.

No, we will not discard this noble cause, we will just shift our focus to another drought-hit area. Chitradurga District in Karnataka is expecting our helping hand to protect the cows during this phase of drought.  It is a great opportunity to take part in one of the best social cause of protecting desi cows. Join us, extend your helping hands to innocent cows. For more details or if interested to contribute for this cause, contact Shishir-9483484074

Box Item: #SelfieWithDesiCow is a unique initiative from Bharatiya Gou Parivara to unite people with cows in a traditional way. We request everyone to visit your nearest GouShala and appreciate the cow owners for their selfless service of cow. It is our duty to convey them that we will be with them as a support any time. We need to send message to the world that our India loves and cares for desi cows. Let us click a selfie with desi cow in the GouShala and upload in Facebook and Twitter with #SelfieWithDesiCow hashtag