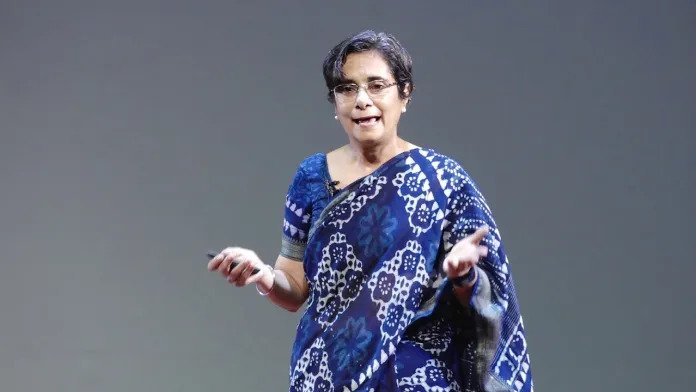 Gagandeep Kang is reportedly set to join Gates Foundation as Global Health Director. She is a fan of Dhruv Rathee who is known for spreading AAP propaganda. Kang had spread scepticism about the indigenously developed Covaxin.

The Financial Express report on the development says:

Financial Express Online learns quite reliably that the good professor at the Christian Medical College, Vellore, will be joining the Bill & Melinda Gates Foundation. While she is not available for a comment, we learn that she will join as a director, of global health with a focus on enteric diseases (gastrointestinal) and diarrheal (diarrhoeal) infections. These have been a bane for many countries in Africa and South Asia, including India. She will be reporting to Trevor Mundel, president, of Global Health at the foundation…

…Given that Dr Gagandeep Kang, 60, is superannuating from CMC, Vellore, and is currently also on several important committees, she may probably want to take her time to conclude the commitments she has already made and stay connected with CMC, an institution with which she has developed a close bond.

So, the transition in her role may take a few months. There is still no clarity on this as also on the time she might have to divide between India and the US. Regarded as a highly meticulous person by most of her friends, she may want to avoid any conflict of interest given the various hats she wears at the moment through her role in the several important committees that she is a part of. For instance, Dr Kang is currently on the National Technical Advisory Group on Immunization (NTAGI) among other committees, including on vaccines.

Kang is a member of the anti-Modi lobby who had raised questions about the vaccines approved by the Bharatiya government. She wanted to know how the government approved a vaccine that was on trial. “I have no clue. I have never seen anything like this before,” said Kang. She had made the remark citing the ‘complicated language’ as the reason for harbouring apprehensions about the indigenous vaccine.

“While Dr Gagandeep Kang belittled the COVID-19 vaccines developed in India and fuelled doubts regarding the efficacy of the vaccines, it is pertinent to note that Dr Kang was one among the 150 ‘scientists‘ who had signed a letter subtly appealing the voters to vote against the Modi government during the 2019 Lok Sabha elections”, highlighted OpIndia.

It appears she had basically opposed vaccines made in Bharat only due to her anti-Modi bias. Furthermore, despite compelling evidence against mRNA vaccines, in her article, Gagandeep Kang recommended booster shots of the UK’s COV-BOOST, Novovax, Pfizer BioNTech, Covovax, and Corbevax. She had also doubted the authenticity of the data released by Bharat Biotech and Serum Institute regarding Covaxin and Covishield.

Kang holds Dhruv Rathee as a genuine source of information despite the fact that he has been caught spreading unverified fake news several times. Not surprisingly, Rathee is also well-known for his anti-Modi stance and has often tried to defame the central government.

There has been a targeted attack on Bharatiya pharma companies ever since they succeeded in developing vaccines indigenously and without any side effects at that. In other words, personal biases and not objective analysis dictate their views. With Kang heading the Gates Foundation, one can expect more such attacks on Bharat’s pharma companies only because Kang harbours a bias against PM Modi.