Zameen Jihad in Jammu: the conspiracy to make Jammu a Muslim majority area 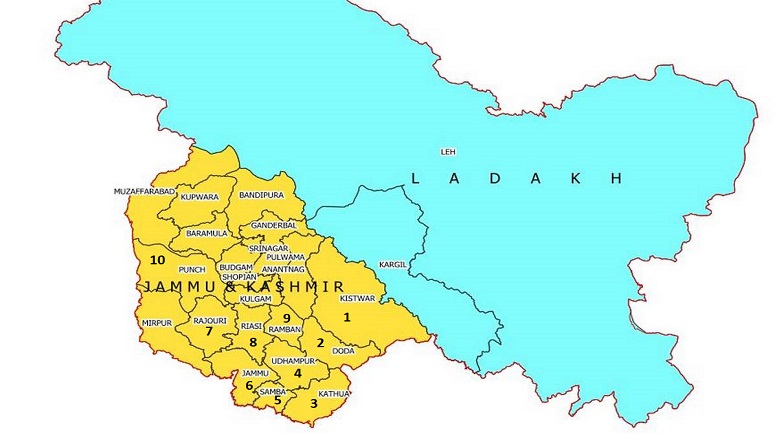 On July 13, in Kathua district of Jammu and Kashmir, a Hindu youth Deepak Kumar was killed. Jammu division has since witnessed protests against killing of the youth and against the zameen jihad, which is the root of this killing.

Before anything, let us take a look at the Map of the Union Territory of Jammu and Kashmir and try to understand the demography. 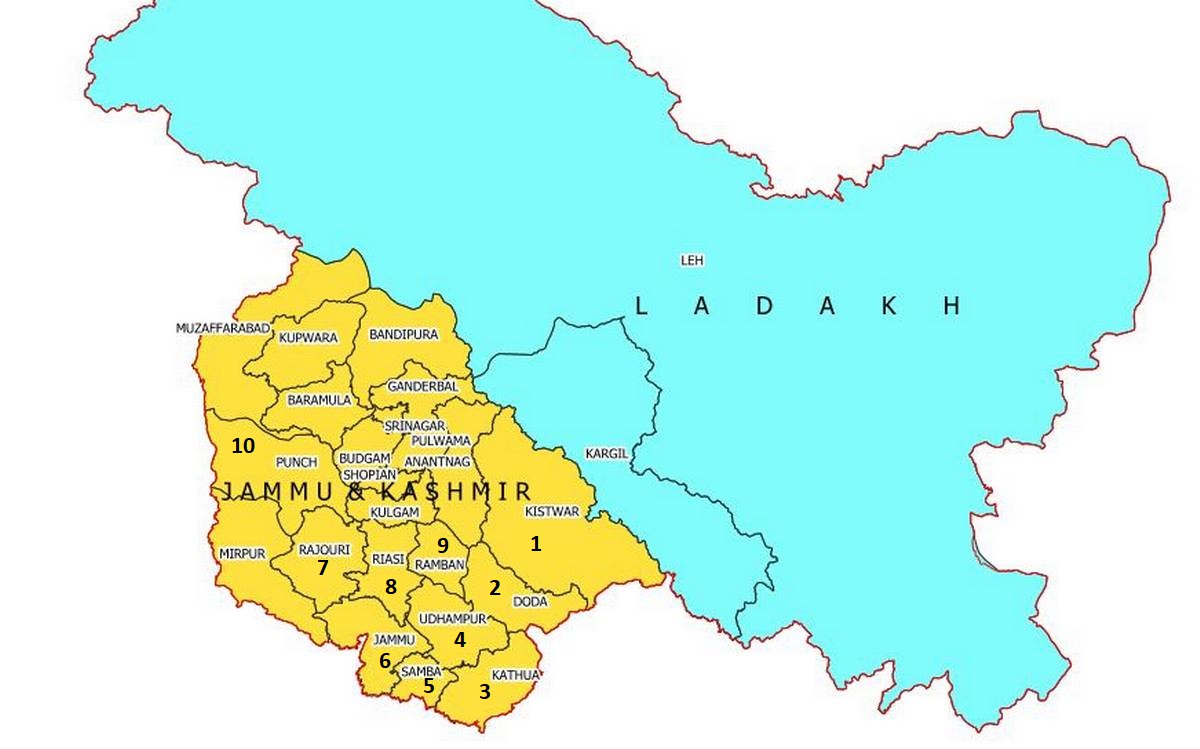 The Jammu Division of Jammu and Kashmir has 10 districts marked in the map. It is towards the south of Pir Panjal range, which divides Jammu division from Kashmir. Jammu division in itself is Hindu majority, but Hindus are concentrated in Jammu, Kathua, Samba and Udhampur districts, and form slightly less than half the population in Reasi. Other districts in Jammu Division are Muslim majority with Kistwar, Ramban and Doda having majority of Kashmiri Muslims and Rajauri and Punch having Jammu Muslim majority.

Jihad is an Arabic word, which means struggle against unbelievers. This struggle can be of many types, however it classic meaning is military struggle. Those fighting Jihad are called Mujahid (Mujahideen in plural) and Islam places an obligation on pious Muslims to do Jihad for the religion. The purpose of Jihad is victory and domination of Islam. Of course, this struggle can also be non-military.

It can take the form of what Islamists like Zakir Naik or members of Tabhleegi Jamaat do i.e. Jihad by preaching and converting people. In modern times, we have come across love jihad, sexual jihad and also zameen jihad. This land jihad or zameen jihad takes multiple forms, including:-

It has ever been an Islamist dream to alter the demography of Hindu majority areas of Jammu. Zameen Jihad has been a useful instrument of Islamists of all hues to achieve this end. IkkJutt Jammu, a citizen’s group from Jammu has repeatedly raised their voice against this sinister conspiracy in last few years. According to the shocking revelations made by the group this has been done with connivance of top political leaders of the state.

Indeed, a law called Roshni Act was enacted in 2001 by Farukh Abdullah govt. It was enacted to transfer of ownership rights of govt land to its illegal occupants, subject to the payment of a cost, as determined by the government. It set 1990 as the cutoff for encroachment on state land. The government’s target was to earn Rs 25,000 crore by transferring 20 lakh kanals of state land to existing occupants against payment at market rates. This money was to be used for setting up hydroelectric projects, thus the name Roshni.

This illegal act was further extended in 2005 by Mufti Mohammad Sayeed’s PDP-Congress government and cutoff year increased to 2004.  Next, Ghulam Nabi Azad extended the cutoff to 2007. The government further gave ownership rights of illegally occupied land as agricultural land to farmers occupying it for free, charging them only Rs 100 per kanal as documentation fee.

Even a child can understand how the act had all the design flaws for its illegal use:-

Impact of the act

This act facilitated transfer of about 3.48 lakh kanals of land i.e. about 176 square kilometres of govt land to around 29500 beneficiaries. By proportion, this land should have brought about Rs. 3600 crore but the govt received just Rs. 76 crores for giving away this land. So, in a vast majority of cases, the strategy mentioned in point 3 above was employed to get land for free!

Of the total 29500 people, Kashmir division saw just 4500 people given land rights and 25000 people were illegally settled in Jammu! 90% of those who benefited were Muslim. It included relatives and near-dear ones of former Chief Ministers, ministers and govt. ministers.  Things get still more interesting. Many of these Muslims were not residents of the state!

Readers will note that the then Article 35A of the Constitution of Bharat barred any non-resident of Kashmir from purchasing or acquiring land in Kashmir. This article was repealed in 2019. It appears that the article was applicable only on Hindus while outsider Muslims were quite welcome to settle in Hindu majority Jammu. This included Muslims from Pakistan. In a specific case cited by IkkJutt, Chaudhary Muhammad Rafiq of Pakistan was allotted 480 kanals of land!

This act was finally repealed in December, 2018 by governor headed State Administrative Council (SAC), but the land already transferred to encroachers  was not taken back. A petition in High Court ensured that the beneficiaries cannot sell or transfer the land released as of now. The Bakarwal and Gujjars of Jammu have opposed the repealing of the act and it has led to clashes including the murder of Deepak Kumar.

The unfinished plan of Islamists

The Islamists’ future plan was to make many more, including Rohingyas, permanent residents of the Hindu majority Jammu. Indeed, according to govt estimates, about 20 lakh kanal land is under illegal encroachment. IkkJutt says that the real figure is much higher and claims that 50 lakh kanals of land has been encroached on in last 30-35 years!

Rohingyas are found in the border regions of Myanmar with Bangladesh. They are Muslims and had met Jinnah in 1947 and demanded that their areas be included in Pakistan, however Jinnah declined. They started a separatist insurgency within Myanmar. By 1960s the Mujahideen had been defeated.

The insurgency reignited under the banner of Arakan Rohingya Islamic Front/Organisation aka ARSA (Arakan Rohingya Aalvation Army), which had links with Al Qaeda and Taliban and got shelter in Bangladesh. They restarted their activities and killed border guards, and civilians including a massacre of Hindus of Rakhine. As a result, the Burmese military and people drove many of them out. Tens of thousands of these radicalized Rohingyas, many with terror-links, have been settled in Jammu region. The live on encroached land and there were plans to give them permanent residence there.

It is to be noted that Rohingyas are conservative Muslims and their population explosion has led to worries even in Bangladesh. According to a report in Dhaka Tribune, there are around 1 million refugees in Bangladesh and in 2 years, they had given birth to 91000 babies. This is a huge 4.5% population growth per year! This is more than double the Bharatiya average.

What is to be done?

The Islamist project is not defeated yet. The fact is that those allotted land illegally remain in possession of it. The Rohingyas remain settled illegally in Jammu. There are some things the govt needs to do on a war footing:-

Jihad has multiple dimensions. In vast areas of Bharat, it has taken the form of land jihad. It has helped more than 2  crore illegal Bangladeshis and tens of thousands of Rohingyas to live in Bharat. It has made our cities unsafe to live and in border states/UTs like Jammu & Kashmir, West Bengal and Assam it is a national security issue.

The government of Bharat has taken the prudent step of removing the constitutional anomalies of Article 370 and Article 35A. It should follow up now and take serious steps to foil the Islamist agenda in Jammu.