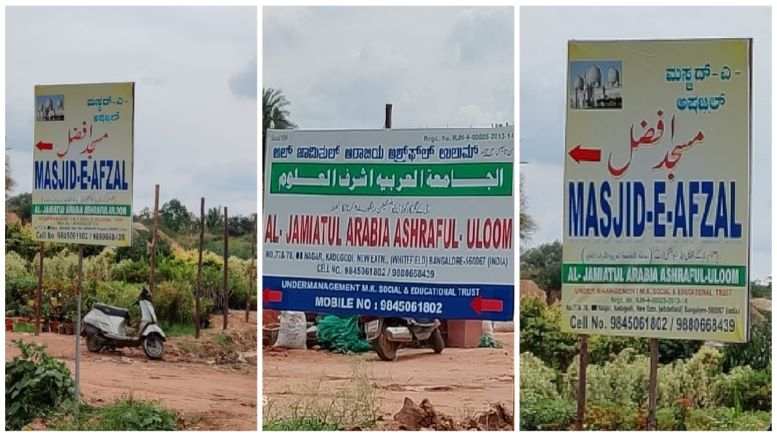 The alleged encroachment has taken place at Kadugodi plantation near Bidarahalli in Bengaluru East Taluk. LRPF (Legal Rights Protection Forum) has filed a written complaint with the said authorities bringing to their notice the erection of religious structures at the site without approval or permission from the concerned authorities of Bengaluru Municipal Corporation.

The complaint states that the site is presently being managed by MK Social and Educational Trust. LRPF has provided photographic evidence of the encroachment and requested the authorities to take action.

As per Section 2(e) of Karnataka Public Premises (Eviction of Unauthorized Occupants) Act 1974, the site mentioned in the complaint falls under the “Public Premises under the control of a competent local authority (here the Bengaluru Municipal Corporation)” category.

LRPF had earlier brought out a serious matter of forest land encroachment in the Chikkamagalur district of Karnataka where they had filed a complaint with the Additional Principal Chief Conservator of Forests (Vigilance) alleging the erection of a Jesus statue atop a hill that falls under the jurisdiction of the forest department.

Such an encroachment of forest land was also reported from Kerala where the Church had encroached forest land close to the iconic Sabarimala temple by planting wooden crosses.

Land or Zameen Jihad is a serious problem staring at Hindus unless action is initiated by calling out such blatant attempts to grab public land. The modus operandi, besides other methods, also includes capturing government land, especially forest land, railway land, on river banks etc. for making illegal colonies. Raising illegal religious structures on highways and city roads which start small and over time capture valuable land and are crucial for showing power of Islam on Friday afternoons.

Yogi govt to probe all properties registered under Waqf