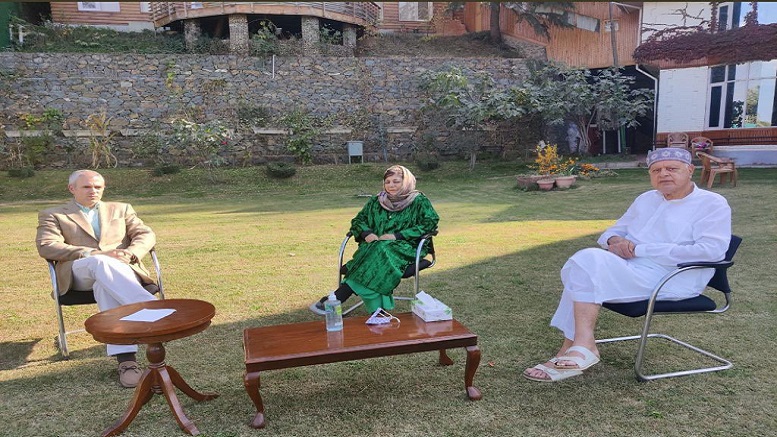 Political parties based in Kashmir valley of the Jammu and Kashmir Union Territory including National Conference led by Abdullah family, People’s Democratic Party led by Mufti family and Kashmir People’s Conference led by Sajjad Lone have come together under the banner of “People’s Alliance for Gupkar Declaration”. The other parties in the Alliance are CPI(M), JKPM of Shah Faesal & ANC. The key demands of the alliance are restoration of Article 370 and resolution of Kashmir. The announcement was done after a meeting at the house of Farooq Abdullah. It must be noted that on Tuesday, Mehbooba Mufti had been released from detention under PSA.

The Gupkar Declaration was made at the house of Farooq Abdulla twice in the August of 2019. Both the times, the demands were the same i.e. maintaining the status quo as on 4th of August, 2020. It must be remembered that on 5th of August, the govt introduced bills to readjust the status of the then state of Jammu and Kashmir.

Basically the declaration demands restoration of Article 370 and 35A, reintegration of Ladakh UT with Jammu and Kashmir UT and no property or residential rights to Bharatiyas living there for a long time among other things. The signatories of the declaration included National Conference, PDP, J & K Peoples’ Movement of Shah Faesal, two small regional parties named Awami National Conference and People’s United Front, and two national parties -Congress and CPM.

The new front formed today has vowed to fight for the agenda in Gupkar Declaration. It is important to note that the Hurriyat Conference has been awfully silent during the last year. The reason could be that since 2018, Pakistani ISI had started to realize that “Hurriyat Conference, the separatist conglomerate created by ISI, won’t be able to deliver any more.”

Hurriyat conference was formed in 1993 after bringing together many divergent Islamist groups. The key constituent was the now banned Jamaat-e-Islami Jammu Kashmir. The Hurriyat became a key platform of separatist groups and its leaders were allegedly also involved in terrorist activities. The new grouping, announced yesterday, also raises the suspicion of its being another front for powers behind the Hurriyat.

The suspicion is based on many recent comments by Farooq Abdullah as well as his family history. He had recently said in September that people of Jammu and Kashmir do not consider themselves to be Bharatiyas. He had further said just days ago that he wishes for China’s might to restore Article 370 in Jammu and Kashmir.

Such comments, as well as the history of Abdullah family does not inspire confidence. It must be noted that his father Sheikh Abdullah was the Prime Minister in the state when Shyama Prasad Mookerjee was murdered in the custody of Jammu and Kashmir police. Sheikh was then imprisoned from 1953 to 1964 and from 1965 to 1968 for conspiring against Bharat. He was then exiled from Jammu and Kashmir and he later made peace with Indira Gandhi only after Bharat had soundly defeated Pakistan in the 1971 war.

Today, Farooq Abdullah talks of them choosing Bharat over Pakistan and having always been for democracy, but the truth is very different. Farooq was complicit, along with Congress, in the electoral malpractices during the 1987 elections in the state. This was done with a view to defeat Muslim United Front, which was making strong inroads in the valley. The election saw approximately 80% voting and MUF won just 4 seats despite securing more than 30% vote share in a rigged election. Many scholars consider this the reason for increased separatism, Hindu exodus and terrorism in succeeding years. It certainly was a very big factor, if not the sole reason. The elements in MUF later founded Hurriyat.

The issue of Ladakh and Jammu has always been absent from deliberations of Kashmiri politicians as well as national discourse on Kashmir. Fortunately, Ladakh has been made a separate Union Territory and is now likely to get a fairer share of attention, jobs, resources, and institutions. However, as Ghulam Nabi Azad proudly remarked in the Parliament, Ladakh is no longer a Buddhist majority region now!

Jammu region has its own issues, including zameen Jihad. It has been neglected in terms of resource allocation, but its forest lands have been used to enrich pro-Pakistani elements and settle colonies of Rohingya. It must be noted that the issues of Jammu and Ladakh, including their opinion on the issues of former state of Jammu and Kashmir have never been raised by valley based parties. Even in the current declaration and formation of alliance, the predominant voices are from Kashmir valley and hardly any opinion from Jammu and Ladakh.

The declaration of the new front is an opportunity as well as a threat for Bharat. The question of national security cannot be ignored and the front cannot be allowed to take up the mantle from the moribund Hurriyat. However, efforts should be made to persuade them to participate in the next elections in  Jammu and Kashmir, after the delimitation process is over and constituencies are fairly distributed between Jammu and Kashmir regions.

These elections should become a milestone in fairness like the 2002 elections. Restoration of the credibility of the the democratic process in the minds of the people of the UT is very important. The economic development of Jammu and Kashmir must also go hand in hand with the resolution of security issues. Hopefully, having been better integrated with other parts of the country, Jammu and Kashmir as well as Ladakh will have a brighter and more peaceful future.