While Bharat mourns, this is how Pakistanis & Liberals reacted to Sushma Swaraj’s tragic demise 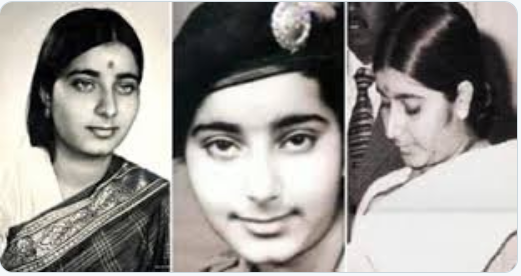 Shrimati Sushma Swaraj, former External Affairs Minister (EAM) and one of the senior-most Bharatiya politicians, passed away suddenly last night of a heart stroke. She was 67.

A powerful orator, inspiration for millions and popular across party lines, condolences for her untimely demise poured in from across the nation and from international leaders.

Sushma ji had gained much admiration from citizens for her hands-on approach towards solving people’s travel/visa woes during her stint as EAM. She changed the entire work culture of her ministry and for the first time ever, ordinary Bharatiye living outside the country felt that their Government is looking out for them.

There were many touching memories shared on social media about the politician who was like a matriarch for the whole country.

Shri Arun Jaitley was one the politicians closest to Sushma ji, and the two of them alogn with Advani ji were by & large the face of BJP during the dark days of UPA 1 & 2 when Sonia Gandhi did so much damage to Bharat. His condolence message came straight from the heart –

Saddened, pained & broken on demise of Sushmaji. She was one of the most outstanding politicians in the Present Era. She distinguished in all positions. She held Senior Positions with the Party, NDA Govt. & while in opposition. She leaves behind a void which is difficult to fill.

Well known & respected for her large-heartedness and motherly instincts, Sushma ji was also quick to respond whenever foreigners faced any issues while traveling to Bharat. In particular, she made a special effort to facilitate Pakistani patients coming for medical treatment. But this generosity based on the idea of a universal humanity seems to have gone waste on many Pakistanis. Indoctrinated with hateful bigotry & idea of religious supremacy from an early age, these Pakistanis (including some eminent personalities) and some of their co-religionists from this side of the border chose this exact moment to spew venom at the departed soul.

The motherly lady who went out of her way to ensure that sick Pakistani patients get quick medical visa in India, for care and treatment. And this is how they reciprocate… https://t.co/Emup5fzafe

Twitter was full of such macabre, disgusting comments from Pakistanis, many of which reflected the religious bigotry of ‘kafir Hindus burning in everlasting hell’ as per standard Islamic doctrine: 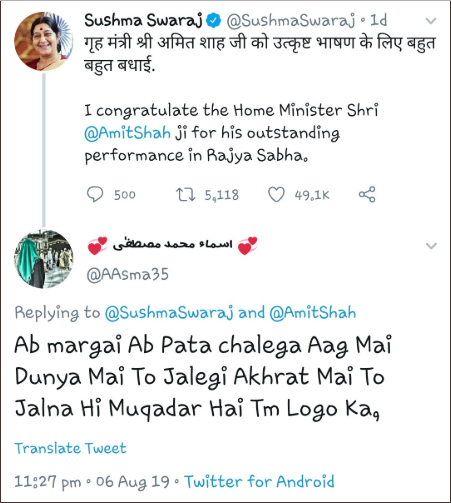 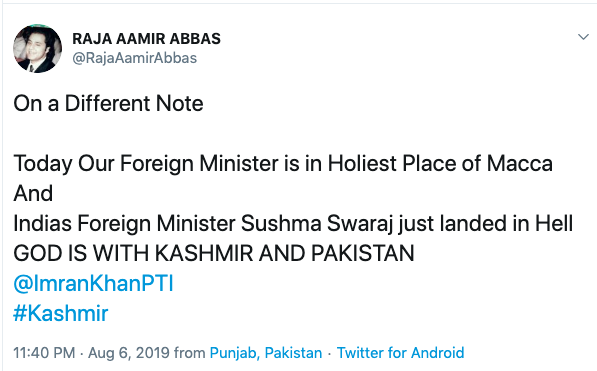 Even Islamists from Bangladesh were seen rejoicing –

And the religious bigotry is not restricted to ordinary Pakistanis. Even well-known personalities within Pakistan were seen openly expressing their Islamist bigotry – 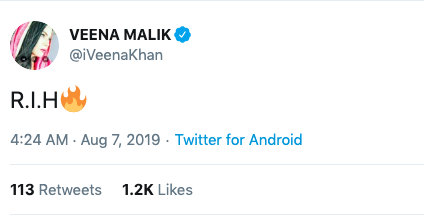 There were a few sane Pakistani voices as well like freelance journalist Marvi Simred who penned a nice piece on Sushma ji, but such voices are on the fringe in that religion-obsessed nation and were quickly dubbed ‘traitors’ for merely expressing condolence at the death of a fellow human being.

Never forget how much they hate you. Never. You'll never be loved by them, no matter how much of a good person you are.
Sushma Swaraj was a gem of a woman. She was truly an embodiment of femininity at its finest.
And yet they speak this way about her. Vile creatures. pic.twitter.com/l6PHNbOw9E

All these bigots are best answered by Sushma ji’s own fearless oratory, arguably her best ever –

You won't find a better speech on secularism than this.#SushmaSwaraj Ma'am at her best
RIP Ma'am🙏
pic.twitter.com/DLFwchoahJ