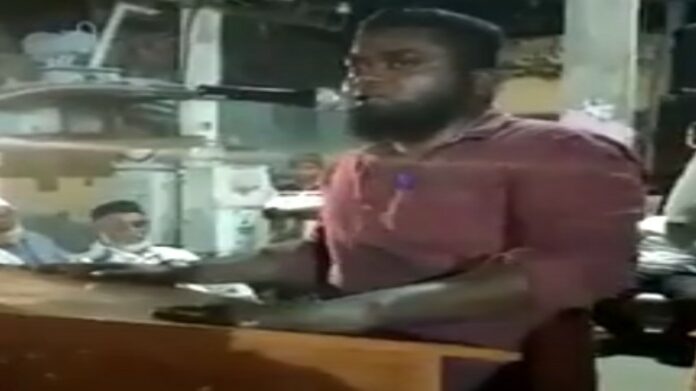 An Islamist has threatened to wipe out everyone from RSS and BJP in Tamil Nadu. Taking inspiration from late Islamist fundamentalist Palani Baba, he issued a warning to the RSS and BJP cadre of Tamil Nadu.

In a video going viral in social media, a Muslim man can be seen talking to a crowd where he says that if Muslims decide to come to the ground, they can wipe out those who are from BJP and RSS in 10 minutes. He says, “If we follow the words of Palani Baba, if we decide to keep aside our conscience for 10 minutes and come to the ground, not even a single RSS, BJP member can walk the streets of TN. It is because we want to follow the democratic way of protest that we are protesting peacefully. If it comes to it not one BJP or RSS member can walk alive in TN. Be warned!”

Palani Baba was a rabid Islamist who fuelled jihadist mindset among Muslims in the 1980s. He inspires Muslims to take violence in hand to achieve their goals. He had boastfully said that he had the documents of a land stolen. The said land belonged to a temple and Muslims had built a mosque encroaching it.

He claimed to have converted a whole village to Islam and pressurised the district collector into giving them protection. He advocated violence and encouraged Muslims to show up in large numbers to intimidate the state. Once he whipped up emotions of the crowd listening to him saying he dreamt of killing at least 10 Brahmins everyday and cleansing the Agraharams(streets where Brahmins live in majority). He said that he also dreamt of killing Marwaris in Sowcarpet, Chennai.

Even though he is no more, Palani Baba’s advice is followed by Islamists even today. In February Islamists of Tamil People’s Democratic Party(TPDP) issued pamphlets to Marwaris in Trichy, asking them to leave TN and threatened them with violence. TPDP was founded by one KM Sharif, a disciple of Palani Baba.