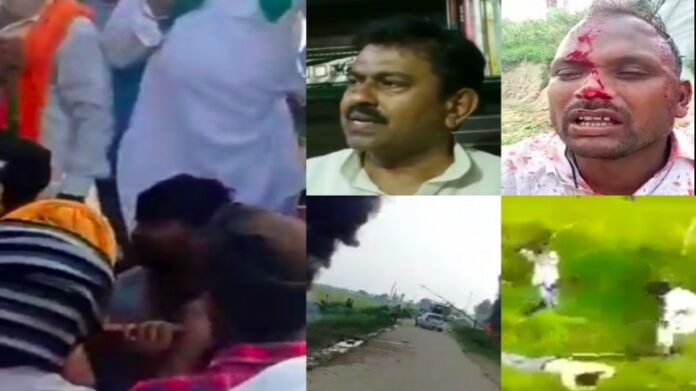 SIT (Special Investigation Team), constituted to probe the Lakhimpur violence resulting in the death of 3 BJP workers and 4 ‘farmers’, has released photographs of suspects who are supposed to have lynched the BJP workers to death.

The Yogi Adityanath government had constituted the SIT to probe into the October 3 violence at Uttar Pradesh’s (UP) Lakhimpur Kheri where besides the BJP workers and ‘farmers’, a journalist also lost his life. According to media reports, photos and videos in SIT’s possession reveal the faces of the suspects. In the pictures, unknown persons are seen standing near a burning SUV and carrying sticks and black flags.

The deceased BJP workers have been identified as Shubham Mishra, Shyam Sunder Nishad, and Hari Om Mishra while Raman Kashyap is the journalist who became a victim of the violence at Lakhimpur.

SIT has requested people to identify the suspects in the photos released by it and provide any provide relevant information to the team on four mobile numbers published by the SIT for the purpose. Furthermore, the team has assured that the names of informers would be kept undisclosed at the same time cash prizes would be awarded to the informers.

“Right after the SIT displayed pictures of suspects the Congress-left oriented human right groups and activists started to criticize the SIT. Activist Trilochan Singh Gandhi, an activist criticized the police for sharing pictures of farmers without identifying their names or without evidence of their role in the violence may put them in peril”, stated OpIndia.

However, the allegations have been rubbished by SN Sabat, Lucknow Zone ADG, who said that the act of publishing pictures of suspects is legally valid and in no way violates human rights as is being suggested.

100 videos of the incident have so far been collected by the SIT which has also issued notices to about a dozen people over the last five days in order to record their statements. Statements of seven people present during the time of the violence were recorded on Tuesday and thus far ten people have been taken into custody in relation to the case.

While the apex court has shown unprecedented interest in the plight of ‘farmers’ who died in the Lakhimpur incident, it has completely ignored the three BJP workers who were mob lynched. While it has scheduled the next hearing for October 26 and asked the UP government to file a status report on October 25, it said that the UP government was ‘dragging its feet’.

“Mr. Salve, you said you have examined 34 witnesses. Statements of 4 have been recorded. Why have not other witnesses’ statements been recorded? Why have statements of only 4 been recorded?” the apex court questioned. It, however, made no mention of the photographs of the suspects released by SIT. Instead, it held that the UP government deliberately going slow on the case.

The court also held that it was concerning itself only with the FIR regarding the death of ‘farmers’ even as Harish Salve pointed out that two FIRs have been filed in the case where the second one concerns that of those lynched by the mob.

Such apathy by the country’s top court to those who have been lynched to death allegedly at the hands of ‘farmers’, shows how justice is lopsided and depends on who the victims are. It also speaks volumes of the judicial system which needs to be reformed. It remains to be seen what stance the apex court would take once the hearing resumes on October 26 and if it would be even-handed in delivering justice.