“I don’t make a show of my beliefs”, says Sharad Pawar to Raj Thackeray, NCP says will organize ‘Iftar party’ in Hanuman Mandir 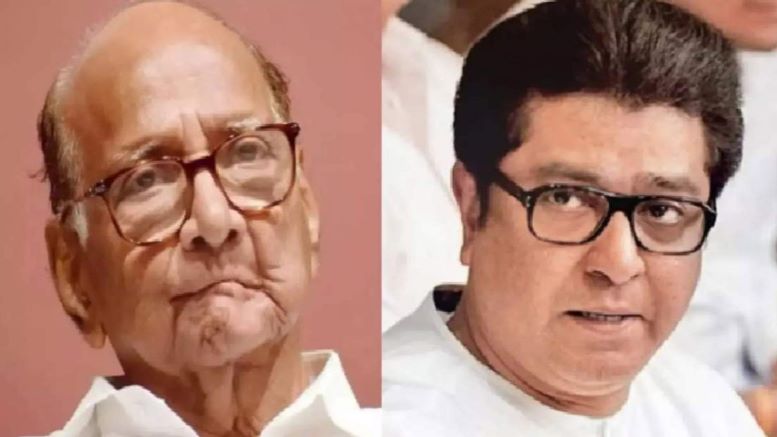 A verbal fight has broken out between NCP Chief Sharad Pawar and MNS Chief Raj Thackeray after the latter’s recent rallies (Gudi Padwa & the subsequent Uttarsabha) where Thackeray launched a scathing attack on the current Maharashtra ruling dispensation led by Uddhav Thackeray.

The Uttarsabha was in response to the criticism directed at Thackeray from several political quarters on account of his Gudi Padwa speech. Raj Thackeray raised the point of Pawar being a casteist. The MNS chief pointed out that castes have been in existence since time immemorial and people took pride in their castes. However, when the NCP (Nationalist Congress Party) was born in 1999 they started dividing people by creating hatred among them and pitting one caste against the other.

He also accused him of encouraging casteist organizations such as the Sambhaji Brigade that divide people into casteist lines. Furthermore, he stated that Pawar always says Maharashtra is of Shahu Phule Ambedkar but never talks about Chhatrapati Shivaji Maharaj due to fear of losing Muslim votes. Thackeray also questioned the NCP’s targeted attacks on eminent Shiv Shahir Babasaheb Purandare.

Highlighting Shivray’s Hindutva roots, the MNS chief said, “Shivray adopted the Bhagwa (saffron) flag that is associated with Hindu temples, saints, and Dharma. Can’t you see the Saffron Vs Green?” he questioned. He went on to add that Sharad Pawar was an atheist and one might find a rare picture of him visiting the temple.

Thackeray also accused Pawar of running his political propaganda by attacking soft targets such as Babasaheb Purandare. He also challenged the NCP supremo to point out the so-called wrong history propagated by Purandare. He added that Chhatrapati Shivaji Maharaj reached every home due to Babasaheb Purandare but NCP have been denying his history only due to their casteist mindset.

Thackeray also stated that the citizens of Maharashtra should, however, ensure that they rise above caste lines despite the attempts to divide them by political parties like the NCP. The point of the Maratha reservation as well as the OBC reservation being used to exact political gains with no intention of helping people belonging to those communities was also made by Thackeray.

Importantly, his daughter Supriya Sule herself confirmed in the parliament that her father is an atheist. Therefore, it is crystal clear that this is no atheism but Hindumisia (Hindudvesh).

There is no doubt that Pawar has been into minority appeasement as he has been seen wearing a topi and shawl at Iftar parties. There are several such images where Pawar’s ‘atheism’ is on display during Iftar parties. It is an open secret that atheism for Bharat’s secular parties amounts to appeasing minorities while dissing Hindu dharma.

While on the one hand, these ‘secular’ parties divide the Hindu society using the caste card, on the other, they use the Islamist card to gain Muslim votes. In doing so, Pawar has even propagated falsehoods such as a 13th bomb blast in a mosque, in an attempt to mask the jihadi nature of the blasts, during the 1993 serial blasts masterminded by Dawood that rocked the financial capital of the country. Vineet Jain’s Maharashtra Times was seen justifying Pawar’s imaginary 13th bomb blast terming it a ‘master stroke’

While the NCP supremo insists that he isn’t an atheist, his party is out to prove that they are anti-Hindu using ‘opposing Raj Thackeray’ as an excuse. The party has announced that they would oppose Raj Thackeray’s playing Hanuma Chalisa on loudspeakers move by holding an ‘Iftar party’ at Hanuman Mandir.

As per available information, the Iftar party will be organized at the Sakhlipir Hanuman Mandir on Saturday. It is important to note that Saturday is Hanuman Jayanti and MNS has announced that it would be holding Hanuman Chalisa Path (reading) and Maha Arti at Kholkar Chowk Maruti Mandir to mark the occasion. For all Pawar’s claims of ‘not displaying his beliefs’, his party is going all out to ensure that it hurts Hindu sentiments as best as it can.

Despite his sudden turn towards Hindutva, it is difficult to take Raj Thackeray at face value and the possibility of a fixed match by Pawar to prop Raj Thackeray up as a ‘Hindutva’ leader now that Shiv Sena’s image has taken a beating in order to gain Hindu votes cannot be overlooked. At present, however, the political scenario in Maharashtra seems to have heated up in the run-up to the municipal elections due this year.