Secularism as principle and practice 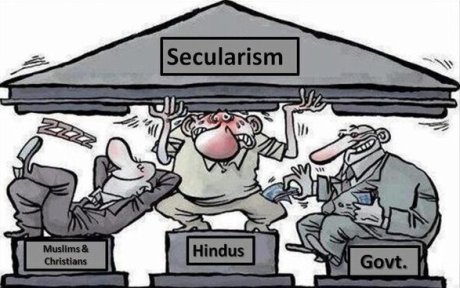 According to Shashi Tharoor, ‘secularism as principle and practice in India is in danger’ (published in The Times of India dated November 2, 2020)

I must add thanks to his party the Congress. Be it regionalism, language, and caste the Congress party had always adopted the methodology of ‘divide and rule’. This is not its agenda of recent times but even from its very inception.

The reorganization of States was one such instance. It was not the revenue, resources, and infrastructure that was taken into account but the states were divided based on the language.

When it comes to caste, Congress did not think twice to extend its tentacles and abetted each caste against the other. Why it had no courage to terminate the Reservation policy? Should the Reservation be continued for eternity? That was not the view of the founding fathers of Bharat’s constitution.

Again, when it came to partition, the Congress was magnanimous in not only dividing my motherland but allowing those Muslims who wanted to stay back to remain in Bharat. Thus, the Muslims ate the cake and had it too.

Was not Dr. Ambedkar clear when he agreed to partition on the condition that every single Muslim must leave the country? Why was that condition conveniently forgotten or overlooked by Nehru and Gandhi? Jinnah was right when he stated that the Muslims will not be able to integrate with the Hindus in Bharat, that was his strong plea for carving out the land for their own.

So my country was sliced and yet we have today more Muslims in Bharat than in Pakistan. And we also face cross border terrorism. Is that not a tragedy? Were Bharatiyas not cheated then and now in the name of religion. To this what will Shashi Tharoor and other secular politicians answer? The Congress indulges in cheap politics and goes to gutter levels in deceiving the masses.

And yet Indira Gandhi was keen to inject the word ‘secularism’ in the Constitution. She had a motive. The Congress had done enough damage to the secular fabric of this country and yet its leaders like Shashi Tharoor try to mislead the masses pretending to be the champions of secularism.

Hence, he has picked on ‘Hinduism’ and Hindutva underlining its distinction. According to him, ‘Hinduism’ is all-inclusive while Hindutva is exclusive. So he makes a case why the Congress respects and accepts ‘Hinduism’ and rejects Hindutva.

When some politicians today talk of ‘secularism’, they try to divest Hindu Dharma from its core Hindutva. It is inclusive pluralism which is the opposite of the faith of the ‘book’. Hinduism, Hindutva, and Hindu Nationalism are identical.

Hindutva is not a communal concept. It is not a narrow religious outlook exclusive as Shashi Tharoor and some politicians argue, but a patriotic nationalism of all, and for all a unity of all Bharatiyas whose legacy is the hoary past, the present, and the future aspiration.

It blends and lends itself to be the legacy of all Bharatiyas who believe in this land of pluralism and diversity and which embraced all of all faiths as one unity in that great Sanatana Dharma and the ethos of this great land. It believes that God is One.

Shashi Tharoor and politicians like him must stop misleading the people and creating barriers and disunity. Make me a channel of your love – where there is strife let there be peace and trust – should be the slogan of these netas. He and others like him need to look inward and come clean to uphold the principles of Hindutva and live up to the values of Sanatana Dharma.

That will be the day when true secularism will become a reality. Whether it is in the Constitution or not let secularism be lived in our lives and not become a bargaining vote-catching bait.