Reports indicate ground-swell of support for Yogi and Modi among Hindus of UP, much to chagrin of India Today group! 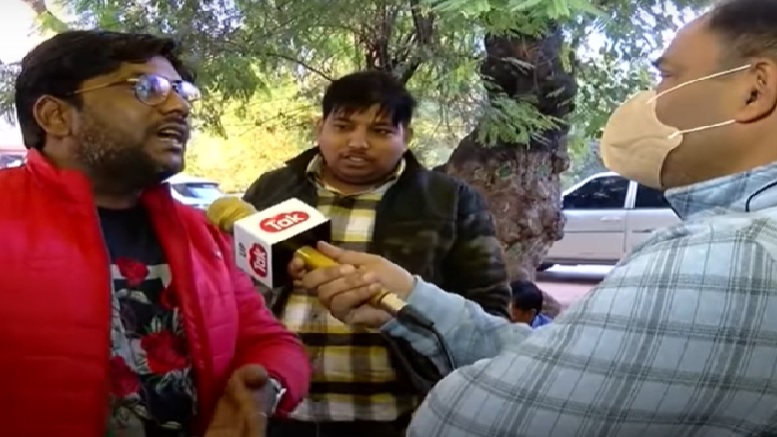 As is their wont, our ‘national’ media has started roaming around with mikes in their hand to ascertain mood of the populace before the UP elections. The infamous “Kaun jaat ho?” (what is your caste) question and its variants, immortalized by NDTV’s Ravish Kumar and Prannoy Roy, are strewn around liberally whenever elections take place in Hindi-speaking states, and Delhi journos did not disappoint this time either.

UP Tak, a susbidiary of India Today’s Aaj Tak Hindi channel, dispatched a journalist to Western UP to gauge the mood of voters there. Both, responses of Hindus cutting across community lines, and the mindset of the India Today group reporter are instructive. UP Tak reporter Kumar Abhishek visited Kawal village in Muzaffarnagar district – this is the same village from where the 2013 Muzaffarnagar riots erupted, after two Hindu Jat brothers were murdered by a mob when they went to challenge the Muslim youth who were sexually harassing their school-going sister.

The video clip shared by UP Tak starts by showing a man who says that Akhilesh will get all votes from his biradari (clan, community). It is only when one listens to the entire video that the real picture emerges.

Ram Kiran (from Saini community), Kamal Singh (from Valmiki community), Baburam Saini, Titu Kashyap, Vijay Kumar (Valmiki) all say they will vote for BJP. The miffed reporter tries to probe why BJP, claims he is hearing Gatbandhan (SP-led alliance) also has support…but people don’t budge. One man says BJP’s term has been good for entire UP, and people have not faced any issues, while others say they like BJP, Modi and will vote for it only. The man who said he and his community will vote for Akhilesh turns out to be one Naved Akhtar.

In another video (see below), the reporter talks to a group of Jatav voters (a Hindu SC community traditionally known to be aligned to Mayawati and BSP). They also proclaim their support for Yogi Baba, much to the reporter’s chagrin who at least three times tries to probe why they won’t support hathi (elephant, BSP’s symbol). People say they are getting timely pension (for disabled) and food rations and are happy with the work Yogi has done.

The UP Tak reporter ends this clip by claiming that he is getting a ‘mixed reaction’, but his downcast face says it all – that face reflects the distress of the Lutyen’s HINO (Hindu In Name Only) liberal who can’t digest why ordinary people are so swayed by ‘fascist’ Hindutvawadis like Yogi and Modi.

In another video, UP Tak reporter Akram Khan visits Gopalpur village in Barauli constituency of Aligarh district and talks to a group of voters from the Hindu Thakur community, most of whom are farmers. Again, everyone says they will vote for BJP with one man saying “the nation is progressing under Modi-Yogi so we will vote for BJP”. The irritated reporter counters, “do you see the sort of development in this area over the last 5-10 years, that you were expecting?” The man replies, “Yes”. With another man, the reporter almost loses his cool demanding what is the logic based on which he will cast his vote. The reply comes, “Yogi Baba has done good work.”

Many people say something to the effect, “Whoever the candidate, we will vote for BJP as it has done good development work…we are getting rations without issue.” Another man talks about the improved security situaton, saying, “We can now move around even at night, there is no fear like before…you can feel the difference.” Another adds, “Yogi govt has managed to stop the copying that used to happen during exams.”

One man says that although he will vote for BJP, it too needs to improve its functioning, raising the issue of stray cattle damaging crops for which no provision of gaushala has been made as yet in or near the village. A youth, who will vote for the first time, says, “You are talking about govt. jobs…in coming time, job shortage is only going to increase, so providing more job opportunities is important. Youth also have to work hard to get jobs. But I am happy with the pace of development (done by BJP), and we will vote for BJP in the hope that they bring even more development.”

To Akram Khan’s credit, he truthfully summarizes what he has heard from the people while ending his story.

However, a group of Jat voters from Shamli vidhan sabha constituency claim they will vote for Prasann Chaudhary, the SP-RLD candidate. One man, Indrapal Malik, says BJP has ‘done nothing” and has only tied up Jats, who are ‘mostly illiterate’ he says, in Aadhar Card, PAN card etc. He says BJP only provided rations during the pandemic, but people want jobs. One man says that sugarcane farmers have not received their dues, so there is resentment among farmers. Another, Jitender Malik, says that highways (being constructed by BJP) are of no use for the poor man on a cycle and ‘only benefit capitalists’. The reporter does not bother to question them about the exodus of Hindus like them from Kairana – which falls in the same Shamli district – during Akhilesh rule from 2012-17.

In Prayagraj, a man tells the UP Tak reporter Santosh Sharma that he is happy that the city’s ancient name was restored – it had been changed to ‘Allahabad’ (Allah’s abode) during Akbar’s rule. The reporter tries to provoke him on how a mere name change helps, and wasn’t the man proud when the city had poets like Akbar-Allahabadi? The man replies that every name has a bhaav (emotion, feeling) behind it – Prayagraj is world-renowned for Kumbh mela, so its good that the original name was restored.

The reporter then talks about ‘lot of anger against BJP over inflation etc’. The man dismissed this outright – “Poor are getting ration, houses, traders got good roads, everyone has electricity – since 5 years, there is no shortage of electricity here. People have water and roads, Prayagraj has undergone a transformation – people from outside feel they have come to Delhi or Bengaluru.”

A young man who works for a private firm starts by criticizing, at the reporter’s prompting, about police lathi-charge against ‘students’ trying to stop a train to protest against the railway recruitment process. But even he admits that roads and other amenities have improved in Prayagraj, albeit he is dissatisfied with the education system which he claims no government has paid attention to – he admits that he himself did graduation in 2016 by copying in exams! But one positive to note is that he is not hankering after government jobs – he says that after gaining some more experience in his current job, he plans to do business.

Another man says, “I don’t know about anger with BJP (responding to the reporter’s question), but BJP has done lot of work…they have constructed roads, there is no terror of goons and gangsters like before. Earlier, you had to negotiate with goons for any land deal, anybody could encroach your land – not anymore. Contracts are being given fairly, without bias or discrimination, farmers are getting pension of Rs. 2000.” The reporter asks the man whether SP conducted the better Kumbh Mela or BJP, and the man reminds him of the 2013 Kumbh stampede at the Allahabad railway station in which 42 people died and hundreds were injured – no one knows what happened to those victims and whether they were compensated, he says.

Bored with the man’s approval of BJP, the UP Tak reporter moves on to the owner of the tea stall, muttering “roads is fine, but inflation also matters”. He asks, “Has inflation impacted your business?”. The tea stall owner replies, “No, there has been no impact on my business. If there has been inflation, our earning too has improved.”

A man from MP who is working in a govt. office in Prayagraj says that he has seen a lot of development work over the last 4 years.

Another man says, “Values of homes has gone up due to road and other infrastructure. Illegal structures have been demolished. Today, if you go to Bamrauli, there is a park called Happy Home – you will find thousands of people there for early-morning strolls, including girls and women. Earlier, they would not step out of their homes. Women can come back from work late at night today, without fear of what might happen to them. Earlier, if you wanted to construct a house, goons had ear-marked different areas and would force you to give the contract to them (like a goonda tax). Today, all such elements have disappeared – 53 illegal constructions by such criminals have been demolished. If you go outside Bharat, you will find that our country’s respect has grown.”

The reporter asks, “Didn’t police help in dealing with such goons (during SP rule)?”. The man says, “No. Instead, police would thrash you…you had to go where the darbar was (to get your problem solved…hinting at SP politicians ‘settling’ disputes in exchange of payment)…today, all those darbars have closed, now there is only darbar. Not everyone from a community or jati is similar – good people from those communities (possibly hinting at Yadavs-Muslims, the traditional vote bank of SP) were also frustrated (during SP rule). A goonda is a goonda for all – whether Hindu, Muslim, Sikh, Christian. Government has spent so much money during Covid, that money has to come from somewhere. But the most important thing today is that even if my wife comes back late at night from work, I do not have to pick her up or fear for her safety.”

Clearly, the disconnect between Delhi-based Lutyen’s media – run by Congress ecosystem fatcat durbaris like Aroon Purie, Shehkar Gupta, Prannoy Roy, Vineet Jain etc – and the common Hindu could not be greater. While media has built castles in the air like “rising intolerance”, “democracy under threat” and what not to demonize Modi and Yogi, ordinary people have directly experienced what BJP governments have delivered far-2 better than the opposition – better infrastructure, development works, improved public service delivery, less corruption, better law & order, and a focus on national objectives.

Hindus are now able to see through the agenda being run by Hinduphobic media outlets, but still have the grace to talk politely to media vultures looking to provoke or ridicule them.