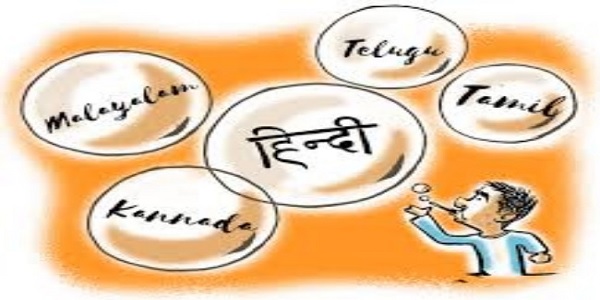 Anti-Hindi protests in Tamil Nadu are simply unwarranted. After all, implementation of 3 language formula as advocated by NEP, is just a draft proposal that has been put in public domain for wider consultations and discussions. It is not for the first time that such an issue has cropped up; the nation has vivid memories of the turmoil and violence that occurred during the anti-Hindi demonstrations in Tamil Nadu in the fifties and the sixties.

As a matter of fact, the very organization of states in Bharat on linguistic basis has engendered regionalism and ‘sons of the soil’ attitude bordering on sub-nationalism at times. It would have been much better had the states been reorganized on the basis of geography and financial sustainability as this would have facilitated more development. But though the union government can alter and change the boundaries of states and rename them by a simple majority of votes in Parliament as per constitution, the clock can’t be reversed due to adverse socio-political ramifications.

Surprisingly, other southern states like Telangana, Andhra Pradesh, Karnataka and Kerala do not have so much disdain towards Hindi as the Tamilians and slowly but steadily, they have started accepting Hindi as a link language with the rest of the country. Why is the case of Tamil Nadu so different?

The fault lies in the nature of Dravidian polity. The edifice of the Dravidian movement has been built on hatred against the North Bharatiya culture, disdain towards the Brahmins and protest against the alleged imposition of Hindi. Right after independence, the leader of the Dravidian movement Periyar harboured dreams of establishing an independent Dravida land comprising of all the south Bharatiya states.

He was more supportive of the imperial power than the national freedom movement which, for him, was simply a movement to impose the hegemony of Brahmins over the Bharatiya landscape once the Britishers left Bharat. However, the Dravidian movement failed to transcend the boundaries of Tamil Nadu but to its credit, Dravidian parties like DMK and later on AIADMK wiped out the national parties electorally from the state.

Though the goal of the Dravidian movement has been social revolution, facts prove otherwise as Tamil Nadu has become the den of caste politics. Intermediate and OBC castes like Grounders, Vanniyars, Thevars etc have wielded political power while Dalits have been marginalized to the periphery. Not only this, Dalits have suffered atrocities at the hands of powerful intermediate & OBC castes like Vanniyars from time to time which have scoffed at Dalit assertion.

Dalit parties like VCK or Panthers are still on the fringe. Construction of a caste wall in Uthapuram to segregate the Dalit population attracted national headlines while violence against dalits at places like Dharmapuri are not isolated incidents.

Isn’t it pathetic that despite the passage of more than 70 years since the onset of the Dravidian revolution, the state has seen no Dalit CM? The anti-Dalit feudal character of the Dravidian parties is hidden just because from time to time, these parties launch radical welfare programs like Mid-Day Meal and distribute free TV sets and free Washing machines to the Dalits in the glare of cameras.

If Dravidian movement was about egalitarianism and social transformation, why have the structural measures like land reforms in favour of the Dalits not undertaken? The harsh reality is that Dravidian movement was designed with the sole purpose of ending the monopoly of Brahmins in social, political and cultural matters. The Dravidians have proved far worse than the much-reviled Brahmins when comes to subjugation of Dalit rights.

The Dravidian parties targeted Brahmins because as the custodians of the Hindu culture and religion, the Brahmins maintained the organic linkage of the Tamils with the rest of the country and by virtue of a head start in education, they dominated the Tamil society intellectually and politically.

Parties like DMK and AIADMK have tried to carve out a distinct autonomous Dravida identity to perpetuate their domination and keep the state secluded socially and culturally from Bharat’s landmass. The protest against Hindi should be seen in this context. DMK and AIADMK do not want BJP to gain a footprint in the state. Nationalism and Hindutva are anathema for them.

Dravidian politics has murdered the soul of Tamil Nadu by contemplating to disconnect the state from the past. The Sangam literature composed in ancient times talked about worship of Vishnu, Shiva and Indra and mentions Ganges as the sacred river besides referring to Hindu rituals, festivals, Vedic sacrifices and even funerals. Even the word Sangam comes from a Sanskrit word Sangha that means gathering or congregation of people.

For all those advocates of Dravidian politics who tend to separate Sanskrit from Tamil as distinct language groups, it is pertinent to point out that both Sanskrit and Tamil had the same mother i.e. Brahmi language. Murugan is the most worshiped god in Tamil Nadu and he is regarded as the son of Shiva and nephew of Vishnu. Some of the most marvellous Hindu temples are in Tamil Nadu and all of them have been erected by the great Hindu rulers of the Chola, Chera, Pandya, Rashtrakutta and other dynasties.

Unfortunately, for the Dravidian parties, these temples have become money spinning machines. From time immemorial, the Bharatvarsha has been conceived of a geographical entity extending from the oceans to the Himalayas irrespective of enormous diversity and has witnessed the acceptance of common deities, common belief systems, common modes of worship and common gods and goddesses.

Hindu Dharma has been the socio-cultural fusion between different ethnicities across Bharat. The Alvars and the Nayanars who were Tamils played a key role in the perpetuation of the Bhakti tradition in the country.

However hard you try, you can’t kill the connection between the Sanatan Dharma and the land of Adi Shankara, Thiruvalluvar and the revolutionary poet Subramaniam Bharti. Dravida itself is a Sanskrit word that means a place where the great ocean waters meet. Dravida has never been about race and hence, it’s high time the Dravidian parties stop preaching the race theories that they have borrowed from the west.

Thiruvalluvar’s Thirukurral is traditionally praised as Universal Veda and touches issues that are at the core of Sanatan philosophy, culture and civilization. It is widely believed that Tolkkapiyam (Tamil grammar) was composed by the disciples of sage Agastya who crossed Vindhyas to enter south.

The popularity of Ramayana in that part of Bharat shows the emotional bonding between north and south. Bhagwan Rama fought with Ravana and for this, he had to traverse through south and places like Rameswaram still bear testimony to our cultural unity. Kamba Ramayan is a masterpiece.

Other Dharmic religions that originated in the north like Bauddha Dharma and Jain Dharma are mentioned with great veneration in Tamil literature.

Now, let us turn to kings and rulers of the south. Though military expeditions from north to south or vice versa were difficult due to inhospitable terrain, they occurred from time to time. Rajendra Chola defeated the Pallas of the Ganga region and brought the holy Ganga water to purify his capital Gangai Konda Cholapuram.

Cheran Senguttuvam of Sangam age defeated the Yavanas and is said to have expanded his kingdom even up to the Himalayas as mentioned in Purananooru. The famous Gupta ruler Samudragupta reached as far as Kanchipuram in his southern military expedition. The footprint of the Bharatiya cultural matrix is seen in places as far as Myanmar, Indonesia and Sri Lanka and only southern Bharat’s kings could have done that due to their superior navy.

So, Tamil Nadu and the northern part of the Bharatiya peninsula were no strangers to each other and were bound by a common unifying thread of Hindu Dharma.

I think Dravidian politicians are never going to succeed in their nefarious design of trying to alienate Tamil Nadu from the national mainstream. Tamil Nadu is as Hindu as the rest of the country and rather than allowing the existence of racial theory inspired insincere Dravidian political whims and fancies, the union Govt needs to intervene with the 3-language formula. The Hindi language needs to be promoted and not imposed.

Why do the Tamil politicians want to prevent Tamilians from learning Hindi which is the most popular and major link language of the nation? All the states should adopt 3-language formula on a level footing. The Hindi states like UP, Bihar and MP must ensure that apart from Hindi and English, the school children learn a regional language, preferably from the south like Tamil, Telugu, Malayalam etc.

To know a language is to know its culture. Multilingual people are expected to know about and interact with more cultures making them more accommodative. Multi linguality can help check against regional/linguistic chauvinism. The 3-language formula is going to foster nationalism, promote brotherhood and integration and pave the way for individuals to go slow on their regional identity in favour of becoming national citizens.

The central government needs to act tough and not bow down to the pressure created by regional political parties of Tamil Nadu. The divisive Dravidian ideology needs to be defeated and the lost cultural civilizational glory of Tamil Nadu needs to be reclaimed. But before implementing the study of Hindi as the third language in Tamil Nadu, the state governments of the northern Hindi states must reciprocate and adopt Tamil or any other Dravidian language wholeheartedly in their curriculum.

Before talking about Hindi, let us not forget that there is more than half of the national population that is non-Hindi in tongue; in its love for Hindi the nation can’t afford to ride roughshod over other regional languages.

-by Shri Jai Prakash Ojha (The author works with IGNOU as Assistant Registrar.)