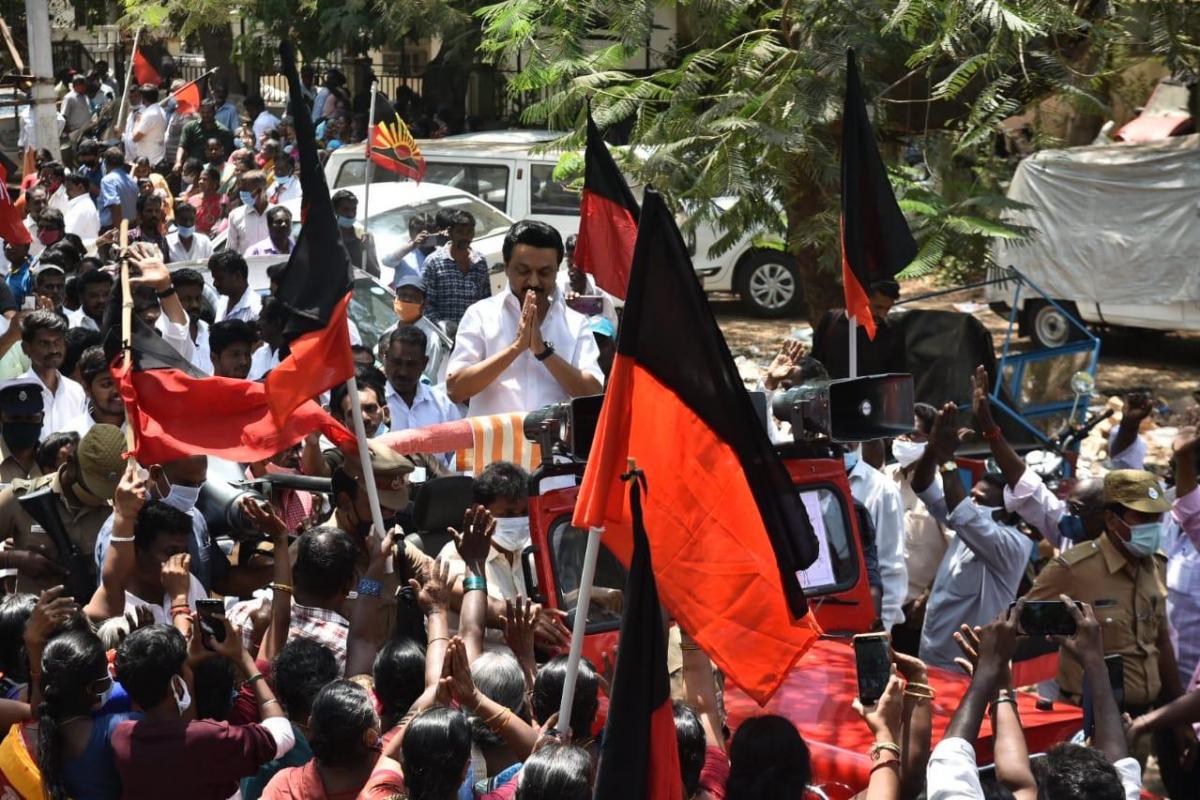 In their greed to grab power politicians do many unjustifiable things. Though such things differ throughout Bharat, regionalism and anti-Brahminism find predominant space in the rhetoric of regional parties and DMK in Tamil Nadu shows the way to others in this regard. However in the 2021 assembly elections, they have stooped to a new low by issuing an ad which spreads fake propaganda and incites hate.

DMK has been accusing BJP and PM Modi of puppeteering TN CM Edappadi Palanisami and Deputy CM O Panneerselvam, and have designed the ad to portray the kind of things the trio allegedly planned and executed or have in mind for TN. To begin with, they have used an illustration of a guy with fair skin complexion sitting inside NLC, Neyveli and spitting paan, while another guy with a dark complexion looks at a board saying ‘No vacancy for Tamils’ with a dumbfounded expression.

DMK has played this North-South divide from time immemorial, but using NLC, a central government run PSU, to propagate that Tamils are not given jobs in the PSUs and other government sectors operating from TN is plain stupid. However this propaganda has been gradually pushed into Tamil youth’s minds by some Tamil nationalist fringe organisations and DMK has used it to gain advantage in the elections. One might remember how Islamists in Tirupur issued threats to the Marwari community and demanded that Marwaris should leave the state. 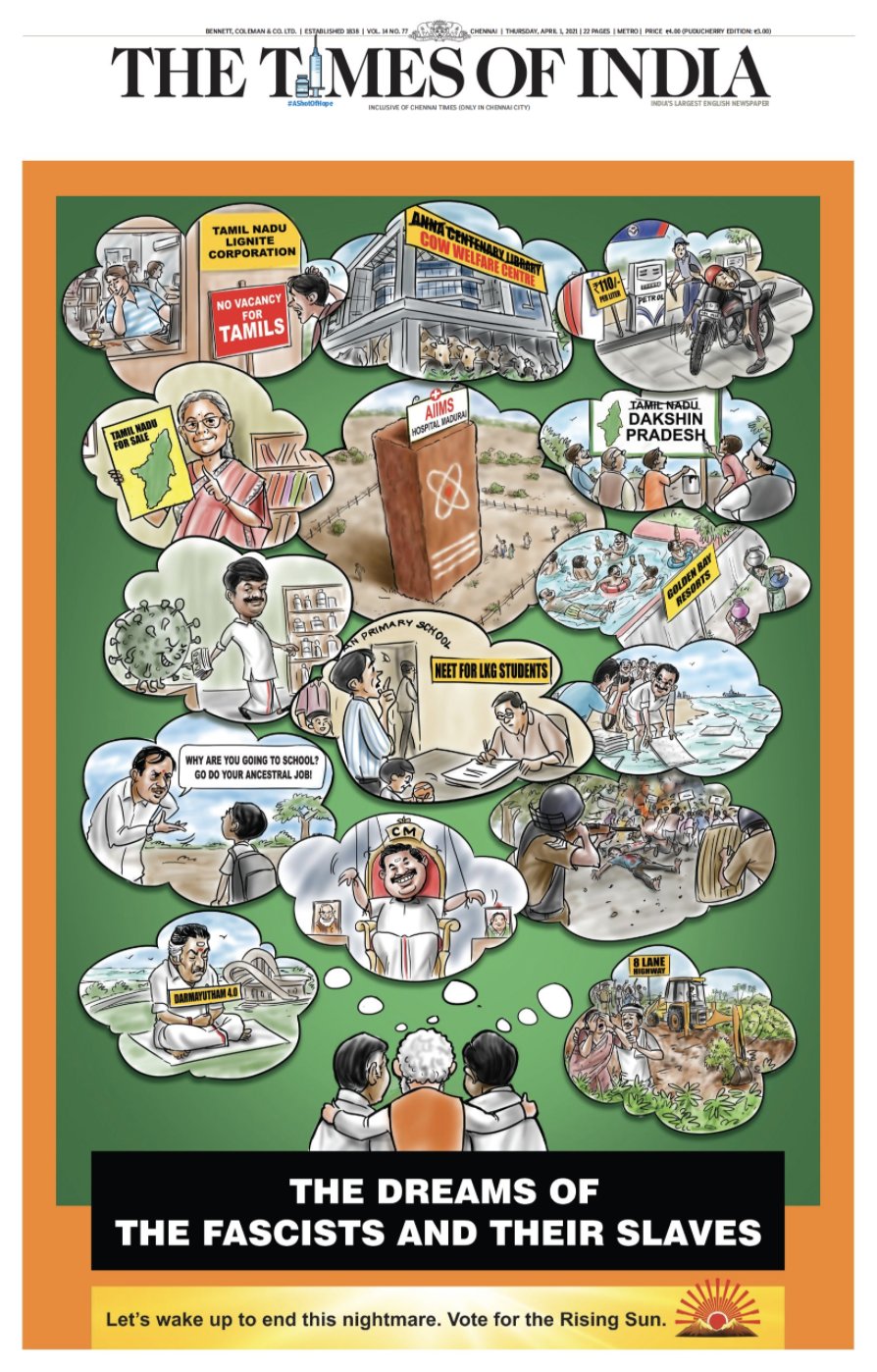 Rahul Gandhi saying that after representing Amethi for 15 years he felt refreshed to do politics in Kerala as he found the ‘electorate to be intelligent’ also comes to mind here. Another illustration is a jibe at Gau raksha which shows renaming of Anna Centenary Library into a Cow Welfare Centre. Using TN BJP’s manifesto promise poster DMK sympathisers created a fake image saying BJP will rename TN as ‘Dakshin Pradesh’ if it comes to power. They have pushed this fake propaganda as well through this ad.

But the most malicious thing is the illustration that depicts BJP leader H.Raja who is a Brahmin as asking a small child “Why are you going to school? Go do your ancestral job!” meaning BJP wants to implement Kula Kalvi scheme. DMK and its allies have spread false information that BJP is trying to implement Kula Kalvi scheme, a brainchild of late Rajagopalacharyar, which was demonised by Periyar and Dravidar Kazhagam, the mother organisation of DMK.

They are not only demonising NEP and BJP through it, but pushing a false impression on Brahmins who are a vulnerable community as it is. One might think what could be wrong in this as it is only an ad. The ad also has illustrations of events that already happened like the police shooting in Thoothukudi to control the violent anti-Sterlite protest and a minister floating thermocol on dam water to protect it from evaporation.

Slipping such real incidents in between fake propaganda would make the masses easily believe the narrative that North Indians are usurping jobs that rightfully belong to Tamils, and that TN would be renamed as Dakshin Pradesh as DMK IT cell has succeeded in making people believe it to be a BJP poll promise. It could result in antagonism towards communities from Northern India and disturb the peace in the state. It could also result in hesitation of business coming to TN as most of the new industries employ people from other parts of Bharat as they can be paid less salary.

But most of all it could result in innocent North Indian workers who lead an honest life through hard work being attacked by anti-social elements. It might also result in Brahmins being attacked as is the norm whenever sentiments are whipped like this.

While the big national newspapers are silent on this dangerous ad which openly seeds regional hatred, Bengaluru-based south-focused digital outlets like The News Minute (also known by the moniker ‘The Naxal Minute’) has written a gushing piece calling the ad a ‘scathing criticism of AIADMK and BJP’. The irony here is that DMK which supposedly stands for social justice and equality enables such discrimination and indirectly incites Tamils through such messaging.