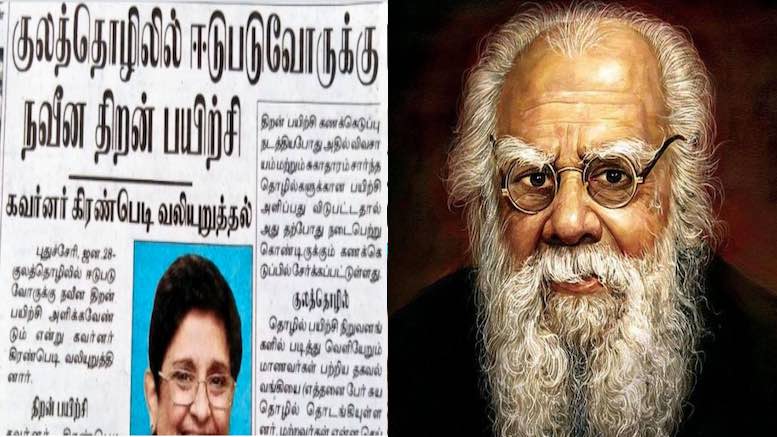 Recently Puducherry governor Kiren Bedi who was an upright IPS officer in her times was abused by Periyarists for promoting Kula Kalvi, loosely translated as education based on hereditary profession. However, it was a case of the newspaper using a misleading headline. She had instead instructed the officials to ensure that even the youngsters who have taken up the hereditary professions get trained in new technologies and are up-to-date.

It was a news report about training unemployed youth under Skill India Mission to improve their skills so that they can get a job or become an entrepreneur. In another part of the news it was mentioned that the fields of Health and Agriculture were missed while granting permission to private entities for providing training in 2017 and that they have been added in the current year. Periyarists and leftists took both these points out of context to maliciously spread misinformation that Kiran Bedi is promoting hereditary profession and asking the children of manual scavengers to take up the same job instead of moving up the ladder.

One of them also deduced from her name ‘Bedi’ that it’s actually Vedi which means someone who knows Vedas and that she is a Brahmin which is why Kiren Bedi is promoting Kula Kalvi! This is how anything and everything is made out to be a Brahmin conspiracy to keep the masses fooled in Tamil Nadu and keep power concentrated in hands of few political families and social groups. Like the ‘Brahmins suppressed everyone else’ narrative, ‘Kula Kalvi means education based on one’s father’s profession’ is also a myth.

This so-called Kula Kalvi scheme was proposed by Shri Rajagopalachariar, affectionately known as Rajaji the then Congress CM of Tamil Nadu in 1953. While it was introduced as ‘Modified Scheme of Elementary Education’ it was dubbed as Kula Kalvi by EV.Ramasamy and his followers. It was designed in a way to overcome the shortcomings of the limited budget allocated for education, availability of qualified teachers and other resources. It proposed that children from 1-5 classes would be separated into 2 batches and two sessions will be conducted. While in one half of the day the usual syllabus would be taught, the students can spend the other half of the day learning some vocation of their choice.

They could either opt to learn their own parents’ profession or other vocations based on their desire and the decision making responsibility was left to the parents. Even the vocation they chose need not be continued through all the years and rather changed in the middle if they wanted. Parulekar Committee which was formed to study this method observed, ‘children will have an opportunity to observe and study the various useful and productive activities of the community and thus develop a growing sense of the dignity of bodily labour’.

The shift method was tested out in some areas of the then Madras Presidency before the new modified scheme was proposed. The only difference between the old and the newly proposed methods was that while out of a full school day 2 hours were set apart for physical training and craftsmanship in the old scheme, according to the new scheme such work would be done outside the school. Apart from this the hours allotted for each subject and the number of working days remained the same.

But this was dubbed as Kula Kalvi, simply because it provided a choice that pupils could learn their hereditary profession if they wanted. That Rajaji happened to be a Brahmin was an advantage for EV.Ramasamy and his political offspring Annadurai who formed DMK after falling out with the former. They peddled a false narrative that the newly proposed educational scheme is a Brahmin conspiracy to deny education to Shudras.

They alleged that only Brahmins occupied most of the white collar jobs while the other castes were toiling masses. Despite the fact that EV.Ramasamy himself could read, write and run a Magazine named Viduthalai despite being a Shudra, many fell for the narrative. It is even alleged that luminaries of that time who were from the intermediary castes conspired together to pit Brahmins against Dalits to suppress the fact that they were the real dominant socio-political force .

However DK, DMK and others who vehemently opposed the modified educational scheme won at the end even Congressis opposed it and voted against it in the assembly. The speaker saved the day though and Rajaji had to gracefully step down from his position as the CM. Those who write about the so-called Kula Kalvi scheme till today claim that Rajaji closed down 6000 schools and thus denied education to non-Brahmin children. However no credible source could be found except books written by Periyarists.

Now, it’s well-known that ‘UNESCO gave an award to EV.Ramasamy’ is a lie. Likewise, there are many lies repeated by Periyarists and this ‘6000 schools were closed by Rajaji’ claim also appears to be one of them. The Parulekar Committee report notes that the number of schools went up from 34,900 in 1921 to 48,800 in 1946. But this resulted in inefficiency and wastage of government grants. So schools with single teachers except in remote areas, hilly regions, etc were asked to shut down and it was made mandatory for elementary schools to have 1-5 standards.

Thus the number reduced to 35,900 in 1946 which comes to around a reduction of 12,900 schools. Perhaps Periyarists and leftists took this figure to lie through their teeth that Rajaji closed 6000 schools. In fact, Congress came to power for the first time in Madras province in 1937, with Rajaji as CM; till then it was the Justice Party, which was later rechristened as Dravidar Kazhagam by EV.Ramasamy, at the helm. And Congress came to power again in 1946.

Anti-Hindi agitation and the opposition to the Modified Scheme of Elementary Education are said to be the main causes that put an end to the political journey of Rajaji. Even though Rajaji is dead and his memory long forgotten, the name given to his scheme by Periyarists continues to haunt Brahmins to this day. Moreover, even the steps taken to reform the education sector, the New Education Policy, 2020 for example, are also propagated as the return of Kula Kalvi to bring back Brahmin supremacy.