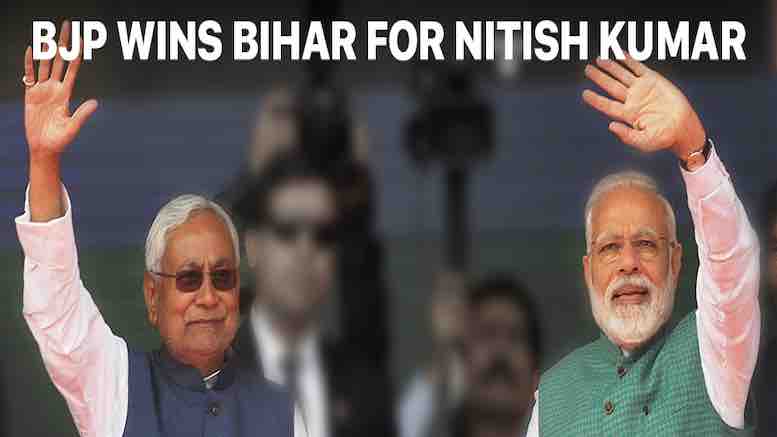 Exit polls were proved wrong, as the NDA coalition managed to cross the magic 122 mark in Bihar assembly elections which saw several tense moments for all camps during counting yesterday.

The biggest takeaway of the election:

1.) BJP emerged as the dominant partner in their alliance with JDU for the first time. In the 2005 assembly elections, JDU had won 88 and BJP 55; in the 2010 election, JDU had won 115 and BJP 91; in the 2015 elections, JDU had joined hands with the Mahagatbandhan and won 71 seats while BJP managed 53 – after over an year JDU left RJD due to fresh corruption charges against RJD chief Lalu Prasad Yadav and his son Tejashwi Yadav, and rejoined with BJP.

2.) Chirag Paswan broke ranks with NDA at the state level, and went alone in these elections. While his party managed a healthy 5.66% vote share, it won just one seat. However, this split in the vote is believed to have cost NDA on at least 20 odd seats.

3.) Asaduddin Owaisi’s AIMIM (All India Majlis-e-Ittehadul Muslimeen, i.e. ‘All India Council for Unity of Muslims’), a radical Islamist party founded in 1944 by the man who headed the notorious Razakars (a private militia that the Nizam of Hyderabad used to terrorise his Hindu-majority people into accepting merger with Pakistan during partition), managed to win 5 out of 20 seats it contested after drawing a blank in the 2015 elections.

All 5 seats won by AIMIM were in the Seemanchal area of North Eastern Bihar consisting of Purnia, Katihar, Kishanganj and Araria districts, which have 38%, 44%, 43% and 68% Muslim population as per 2011 census.

Owaisi has in the past issued veiled threats to Islamize the whole of Bharat, through statements like, “ we will color everything green…insha allah. And no other color will stand before our green insha allah, neither Modi’s color, or Congress.” He has also exhorted Muslims to ditch secular parties and vote for their own community representatives so that likes of convicted terrorist Yakub Memon are not given the death penalty.

Owaisi has also referred to police as ‘khatmal‘ (bedbug), and his MLA brother Akbaruddin Owaisi has issued chilling threats such as “remove police for 15 minutes so 25 crore Muslims can teach 100 crore Hindus a lesson,” besides denigrating Hindu deities like Bhagwan Ram and Maa Sita during his speeches.

The sensitive Seemanchal area of Bihar borders Nepal to the North and the narrow ‘Chicken’s neck’ corridor in West Bengal to the East. AIMIM now has 7 MLAs in its home state Telangana, 2 MLAs in Maharashtra (Old Hyderabad region), 5 MLAs in Bihar, and 1 MP in Lok Sabha (Asaduddin Owaisi himself).

4.) Communist parties, or the Left Bloc, have made a breakthrough of sorts in a Hindi-speaking state, with total 16 seats, with the hitherto lesser known party CPI – Marxist-Lenninst (Liberation) winning 12 seats. CPI-ML (Liberation) is a  splinter group of communist outfits that were involved in the armed Naxal insurgency of the 70s, before it gradually decided to enter electoral politics. Currently led by Dipankar Bhattacharya, the party now has MLAs in Bihar and Jharkhand. The anti-Hindu activist Kavita Krishnan is also a a member of the politburo of CPI-ML (Liberation). The more well-known CPI-Marxist led by Sitaram Yechury and CPI led by D. Raja also won 2 seats each.

The election also points to the rot within Indian democracy that a corrupt, dynast political like RJD’s Tejashwi Yadav managed to garner 23% vote share and yet another insipid dynast Rahul Gandhi’s party Congress managed to win 9.5% vote share.