Modi miles ahead in the race for 2024; regional parties only distant challenge 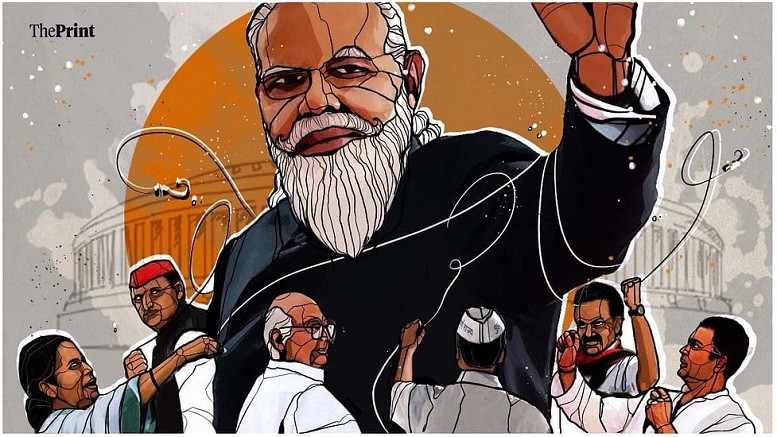 The Congress’ drubbing in 5 states has not stopped Lutyens media, pseudo seculars lobby and Modi bashers and haters from manufacturing some positives from  this defeat and speculating about new arithmetic which could upset the NDA’s applecart in the run up to 2024.

The CWC meet decided to continue with Sonia  as working President  amidst calls from members like DK Shiv Kumar for reinstating Rahul Gandhi as President of the Congress even as rumors were doing the rounds that the Gandhi’s  had resigned  from their respective  party positions. The proposal to make Mukul Wasnik  – a member of the G-23 – as the President was immediately shot down and there will be a “Chintin Shivir” after the budget session to introspect on the defeat.

Surveys are afloat of how the hindu vote which the BJP has been pocketing to win election after election can be fragmented to bring about its downfall. Clearly the well entrenched lobby of fake seculars and Modi bashers have been flummoxed  by BJP’s show – particularly its unprecedented victory in Uttar pradesh- and are now channeling their energies to find ways to defeat the party through the poll arithmetic forgetting that it is the connect of the leadership  with the masses and ground deliverence which has earned  its victories.

Ahead of the CWC meet the G-23 has again gotten together ritualistically as before  to take stock of what is left of the oldest  national party but will they move beyond showing concerns and call for a change  at the helm seems unlikely.

The Congress  leadership  has lost its mass appeal and connect with  the people and its resurrection will not happen in a jiffy. A new leader at the helm with a new blueprint is the need of the hour setting aside seven decade old dynastic culture. Unless the Congress  emerges from the shadows of the “Parivaarvaad” politics  it will stay buried with a status of a regional party.

The defiant and pugnacious attitude of its spokespersons on national television will not help it in garnering votes and the group of 21 or 23 will have to take the bull by the horns and go beyond the ceremonial lipservice after every political debacle.

They must remember that the finest years of the Congress and the country  happened  when the erudite PV Nariman Rao was the Prime Minister of the country though how is mortal remains were dealt with by the Congress  top brass is another  story and needs no reminders.

The late Narsimha Rao emerged from the shadows  of the dynasts to usher in reforms which laid  the foundation of the economic  revolution in the country and the G-23 should take a cue out of his book but until that happens the Congress will be in a quagmire.

AAP has emerged as a strong regional party after its landslide victory in Punjab and is sure to create ripples in Himachal in the upcoming MC elections  in May and assembly elections later this year particularly with its freebies offer.

However it is the hindi heartland  which will decide the configuration  and victor of the 2024 Lok Sabha and the BJP has gone many notches higher as far as its prospects 2 years hence are concerned.

8 states including Rajasthan, Chatisgarh, Madhya pradesh, Bihar, Gujarat, Uttarakhand, Jharkhand and most importantly Uttar pradesh account for 225 seats  in the lower house which is roughly  42% of the total seats in the lok sabha. In 2014 the BJP had won190 of these seats repeating its performance in 2019.

While Congress has come a cropper in these states in the last 2 lok sabha  elections parties like the TMC and AAP are non existent in these states which gives the BJP under Modi a huge advantage and a head start when the elections happen 2 years from now.

With Congress abrogating  it’s title of  national party it is left to the regional players to stitch a rag tag alliance  to challenge Modi which in all fairness seems an insurmountable task as of now and in the near future.

A regional  alliance of 8 to 10 parties sinking their differences and getting together  to fight a national alliance  like the NDA seems implausible  with no consensus on the PM candidate. Such a diverse and a egoistic alliance of regional leaders will only breed instability at the centre.

But even  for that to happen  the opposition needs numbers (seats) on the board to have any semblance of a chance. Perhaps  Prashant kishor has some magic up his sleeve.

Over 2 cr houses sanctioned, 1.69 cr completed under PMAY-G till Jan