President Ram Nath Kovind unveiled the portrait of Netaji Subhash Chandra Bose at Rashtrapati Bhavan on 23 January to commemorate the latter’s 125th birth anniversary. As is their wont, opposition leaders led by TMC’s Mahua Moitra and their supportive left-liberal cabal including journalists launched an attack on the President.

They claimed that the portrait unveiled by President was not that of Netaji but of Bengali actor Prosenjit Chatterjee who portrayed Netaji in the 2019 Bengali movie Gumnaami and the entire cabal jumped at the opportunity to target President. 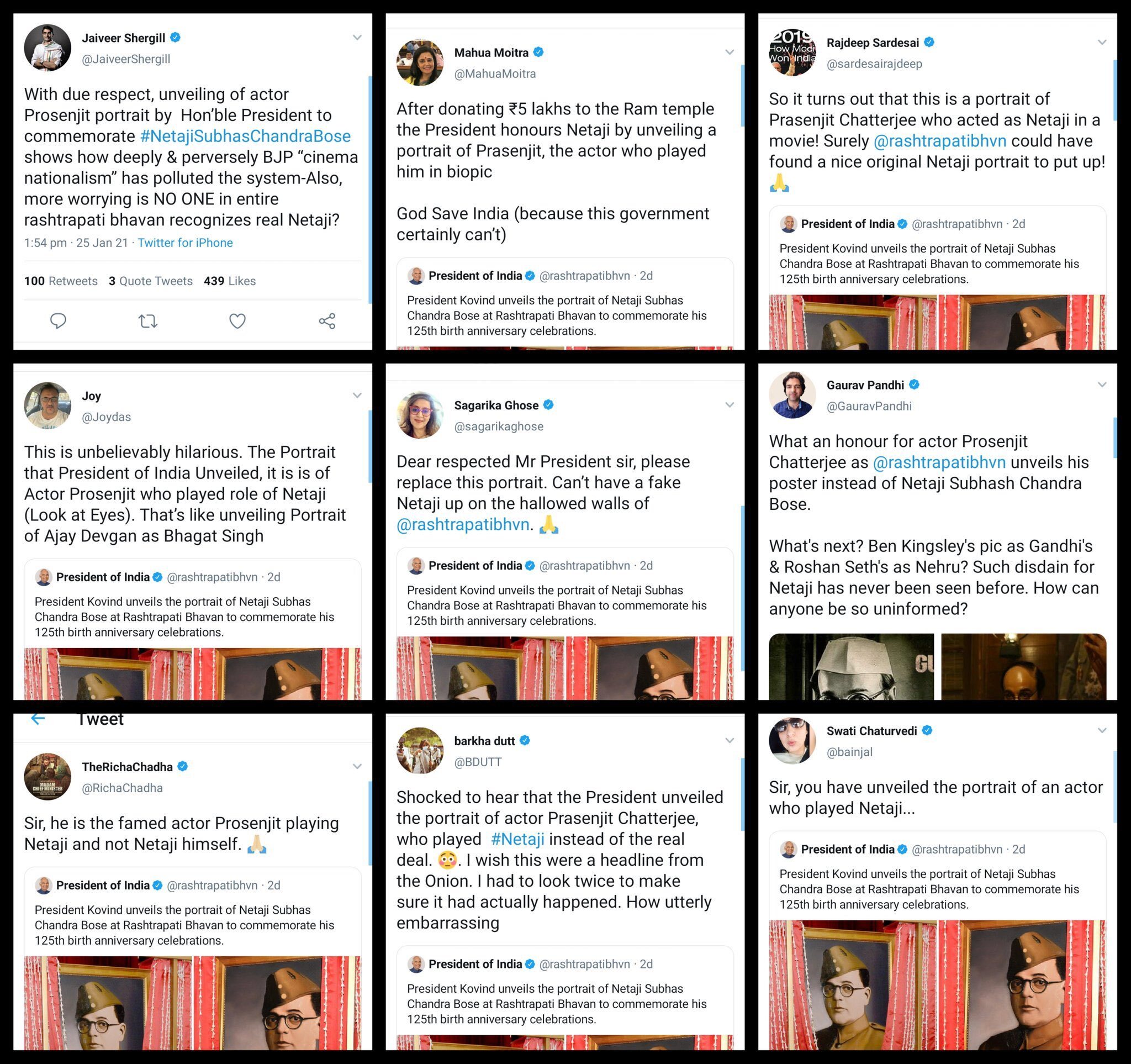 The entire cabal erupted on Twitter to show President Kovind that he had unveiled the picture of a Bengali actor and not of the freedom fighter. This indicates not only how ignorant the so-called liberals are but also their arrogance. They merely saw this as an opportunity to take on a Dalit Hindu President because he happens to have a RSS background and is a proud Hindu.

This is the original photograph of #NetajiSubhasChandraBose, based on which renowned artist Shri #PareshMaity has drawn the portrait which was unveiled at Rashtrapati Bhavan on 23 Jan 2021, by Hon’ble President of India-Shri Ram Nath Kovind ji. @rashtrapatibhvn @narendramodi pic.twitter.com/WTOHqtgs3p

The portrait unveiled by the President at Rashtrapati Bhavan was drawn by renowned artist Shri Paresh Maity and based on Netaji’s original pic as confirmed by Netaji’s grand-nephew Chandra Kumar Bose. Having been left red faced and embarrassed the entire cabal far from apologizing either quietly deleted the tweet or chose to be arrogantly defiant and transfer the blame as Shekhar Gupta did.

Gupta was quick to absolve his liberal cabal by putting out a tweet that blamed ‘social media stars’ instead. It was TMC’s Mahua Moitra who deliberately set the rumor mill wheels in motion which was then picked by Congress IT cell and Lutyens journalists. If Gupta was honest then he should have called out these rumor mongers but it is too much to expect from the Lutyens media which is used to spreading fake news.

It is hard to imagine that they wouldn’t have known the difference between Netaji and the actor considering the fact the image on the basis of which the portrait was made by Shri Maity was shared by Shri Chandra Kumar Bose in January 2020. So it has been in the public sphere long enough for anyone to do a simple search.

The outrage stems not from any error on the part of the government but from the deep-seated hatred the cabal harbors for President Kovind himself. The cabal hates every self made individual and particularly those who are true to their Hindu roots. Their support to Dalits is limited to those Dalits who are anti-Hindu such is their hatred for Hindu Dharma.

The left-liberal gang had made its hatred for President Kovind apparent right from the time he was nominated as a Presidential candidate by NDA (National Democratic Alliance). Hindupost had earlier highlighted the caste and class bias the Lutyens gang harbored against the likes of President Kovind.

So ‘people with dark complexion, poor English, and belonging to lower-caste’ are not preferred by TV editors and anchors, even if those people are appointed spokespersons by a political party!…

…a Ram Nath Kovind or Jitan Ram Manjhi who might be subject matter experts on the issue being discussed are rejected.

For the cabal it is not knowledge but skin color and caste (yes, the very caste system that in their opinion has been imposed by Hindu Dharma & divides the society!) that guides them to decide an individual’s worth.

Nothing much has changed in their attitude from the time Hindupost had said this back in 2017:

The portrait controversy was just another opportunity for the left-liberal and Lutyens cabal to vent their deep-seated bias and hatred for President Kovind. Thankfully, the social media stars, in Shekhar Gupta’s words, are active and alert in calling out the likes of Mahua Moitra, INC IT cell and so-called journalists. Next time before outraging the cabal would do well to conduct a basic fact-check that would save them some embarrassment.