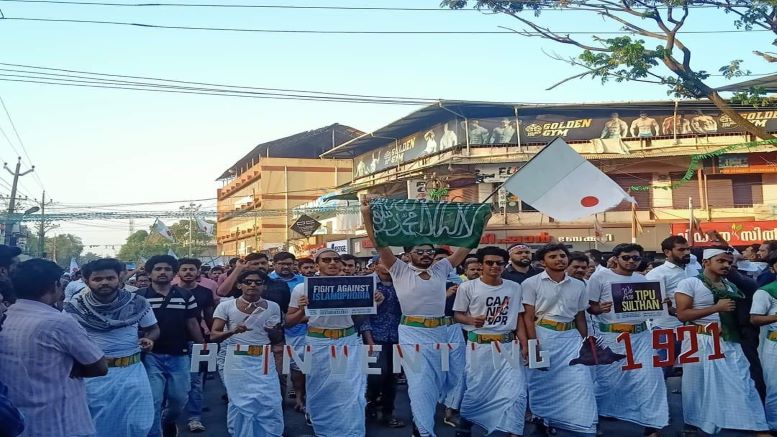 Over the years the demographics of Kerala has undergone a sea change and even though Hindus are still the majority (number wise at least) at 54.73% (as per 2011 census) the fact remains that rate of Muslim population growth in Kerala is around 6-times higher than rate of Hindu or Christian population growth. This changing demographic, amply aided by secular liberals (media, politicians, activists et al), is making its presence felt in the ongoing anti-CAA stir. And Kerala is a perfect case study as to how protest against CAA is simply being used as a smokescreen to hide the sinister agenda of Islamism and Islamic radicalization.

The CAA is crystal clear with absolutely no place for ambiguity, uncertainty, misinterpretation (and we can keep on piling the adjectives) yet it has been used as a tool by Islamists (including Congress, Communists and their cronies) to spread falsehoods. CAA is simply intended at giving Bharatiya citizenship to those minorities from Pakistan, Afghanistan and Bangladesh who have been languishing in refugee camps by speeding up the process and reducing the waiting period for eligibility to acquire Bharatiya citizenship.

Despite having been clarified umpteen times by the HM and PM themselves, Islamists won’t stop the ‘Islam under threat’ rhetoric which obviously points towards a sinister agenda at work and that agenda is ‘unite the Muslim ummah’ with false propaganda of Bharatiya Muslims’ citizenship set to be cancelled. It would then make radicalization and Islamization easier.

No doubt the entire country has been on the edge, thanks largely to these Islamic radicals, Congress, Communists and every other Hinduphobic group out on the streets, but Kerala has been witnessing a unique trend – economic boycott of those who support CAA (so much for freedom of speech and expression), and brazen intimidation of the ‘majority’ by glorifying gory episodes from the past. The idea is to intimidate Hindus into submission and these radicals will not shy away from using any tool they deem fit.

There have been reports of economic boycott & police complaints against Hindus who support CAA, right from Gulf countries like Kuwait and Qatar, to Kerala, to Gujarat and Maharashtra.

Kerala Hindus has to just open their eyes to know the reality. Look how many Hindus been betrayed in Gulf countries for simply supporting CAA. Check the boycott calls made on Hindu businesses in Kerala. See how they're reminding us the 1921 genocide.. open your eyes, look around.

A Hindu tea seller from Oachira in Kerala had been going about his business for the last two decades but he didn’t know he would pay dearly for merely posting a comment on FB (Facebook). He used to serve tea and snacks to merchants and shop owners in the town. Now it so happened that bulk of his customers were Muslims who were offended because he posted a comment supporting CAA and called for his boycott.

Last 21 yrs he used to sell tea & snacks in Oachira, Kerala. Majority of his customers were merchants & shop owners in the town, mostly Muslims. Last week he commented on a FB post supporting CAA, only to found himself boycotted the other day! Imagine, only for a FB comment..!! pic.twitter.com/3VhZhqHQXI

This instance of economic jihad is not an isolated one. Islamists all over Kerala are identifying Hindu businessmen in support of CAA and systematically boycotting their businesses. Everyone from tea sellers to cab drivers are paying the price for just being Hindus and extending support to their persecuted fellow religionists from the three neighbouring Islamic nations.

If you thought this wasn’t about Islamism then wait till you see the kind of ‘fancy dressing’ that took place in anti-CAA protests. There were people dressed up as Moplah/Mapilla Muslims trying to imitate the 1921 Hindu genocide, and as the tyrant Tipu Sultan’s soldiers in a bid to intimidate Kerala Hindus and send a warning signal that history could very well repeat itself.

They marched today in Ponnani as Tipu's soldiers, with their dagger out, imitating the Jihadis of 1921 Hindu genocide, sloganeering violence. Even though they called it anti-CAA protest, message was clear. They're ready to repeat another 1921. pic.twitter.com/FGyG2FXcGJ

Why would anyone ‘reinvent 1921’ if the protests were simply against the passage of CAA?

Meanwhile Jihadis rehearsing the 1921 Hindu massacre at Malabar. Marxist historians and movie makers did a great disservice to Hindus passing it off as 'freedom struggle'.. but these sullahs out there has no such confusion. pic.twitter.com/3U5wRUh8Si

If a Muslim BJP leader himself can get attacked brutally for supporting CAA then what chance do divided and complacent Hindus stand?

It is time to acknowledge that the anti-CAA stir unsettling the whole of Bharat is nothing but naked display of Islamism and Kerala Jihadis are leading the way. Take a close look at every violent protest and you’ll find a Kerala connection to it – be it the so called ‘sheroes’ or PFI. Every chant, every slogan has a clear anti-Hindu tone and a clear message ‘beware Hindus’. If this is not a naked display of Islamism, then I don’t know what is.

There can be nothing worse than indoctrinating young impressionable minds but Islamism is all about dominance, violence and subjugation of others. I’ll leave you with these videos – watch, think and decide for yourself.