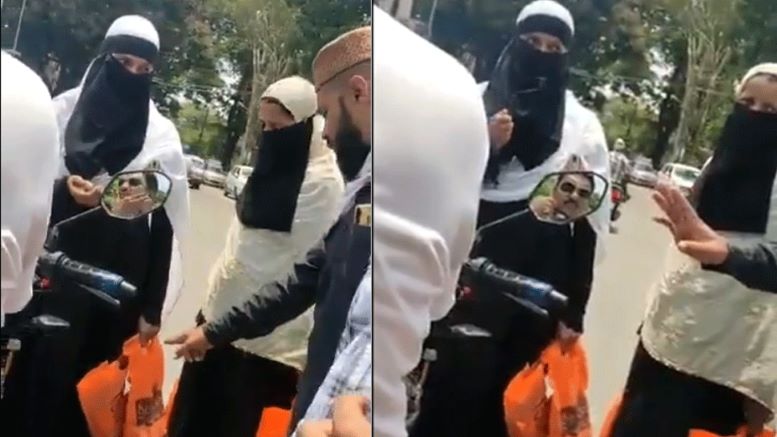 The anti-CAA and NRC protests at Shaheen Bagh followed by the Covid-19 pandemic have served as an eye-opener regarding the real intent of Islamists encouraged by so called liberals and journalists of the Lutyens circle. Earlier, Triple Talaq bill, abrogation of Article 370, and Ram Mandir judgement had enraged those who thought there was an implicit Islamist-liberal veto against such actions.  Furthermore Social Media (SM) has dented their propaganda and credibility even more as a result of which they have been whipping up Hinduphobia by raising the bogey of ‘Islamophobia’. The kind of Hinduphobia being fomented by the liberals, communists and opposition along with their handmaidens in the field of journalism is there for all to see.

At least two separate incidents of Muslim women being heckled by Muslim men in Karnataka’s Davanagere for purchasing clothes for Ramzan from Hindu shops have come to light.

In a video of the first incident, the mob accosts the burqa-clad women as soon as they come out of BS Channabasappa and Sons, a popular Hindu-owned cloth shop in Davangere city. They start hounding the women for carrying their purchases in saffron-coloured carry bags. One man snatches the bags, takes the clothes out and throws away the  bags. The women plead with the aggressive Muslim mob to let them go, but they don’t relent.

Jain bakery owner was arrested for saying that no muslim staff in TN but look at here how they are hounding Muslim women for shopping from Hindu Shop and using orange cover. This is what hatred is and SECULAR INDIA is @BSYBJP @CMofKarnataka pic.twitter.com/2UFwb9Ch3n

They can be heard telling the women, “They have 125 shops, did you see even one Muslim there? Go back to the shop and ask them to put the clothes in a different cover..Didn’t you hear the announcements from your mosque? You found only this namak-haram (treacherous) shop? We are not going to forgive you – this is a matter of all Muslims.”

A second video of the same incident shows the Muslim mob has followed the same Muslim women to another area, and they are now forcing them to return the goods purchased from the Hindu store. One man snatches a bag and the mob is seen forcing the two-women to sit in an auto-rickshaw so they could take them to the Hindu shops and return the products they have purchased.

Similarly, in the video of a second incident from Davangre, a Muslim man walks up to a shop and asks a burqa-clad woman and two other girls to come out. As the burqa-clad woman quickly sits in an auto, she is saying, “We didn’t buy any clothes.” A few more men gather by then and start threatening them, “When jamaats and masjids are telling you, why are you still going to such shops? You don’t understand? Whom do you respect?”

"Jamaats have said not to purchase from Hindu shops, yet you do this!"

Watch how a peaceful man scolds a peaceful woman for visiting a Hindu shop to buy dress materials! pic.twitter.com/EygouPoWUm

The incidents that took place in Karnataka’s Davanagere brings back memories of Shaheen Bagh protests where several speakers regularly called for ‘economic boycott of Hindus’. How fair is this in a so called democratic country? Don’t rules of democracy apply as much for the minority community as they do for the majority?

One speaker at Shaheen Bagh called for boycott of Hindus…pic.twitter.com/EgyjAAZlDS https://t.co/E52c0X7oDs

It was Shaheen Bagh that set the tone for the economic boycott call on Hindus. The speaker asks the crowd to not buy products from Reliance, be it Jio SIM cards or their petroleum products. He then goes on to target Baba Ramdev and Patanjali products by calling them garbage and speaking of it in a derogatory tone by saying that Baba Ramdev is ‘promoting cow and cow dung’ while the crowd is seen cheering him on and clapping. Another lie propagated by him is that Patanjali products are financing arms for RSS (Rashtriya Swayamsevak Sangh). Nothing can be further from the truth but when the intent is to keep the agenda alive then truth is bound to be a casualty. The video makes it amply clear that Islamists consider ‘Hindus’ as ‘enemies’ (yes Bharat is also known as Hindustan) whose backbone needs to be broken by boycotting Hindus. The speaker calls for waging war against Hindus and wants even children to be introduced to this ‘line of thought’.

The call for economic boycott that began in Shaheen Bagh has only grown louder and what we are seeing in Davanagere is just an indicator of things to come. Readers may recall that Hindupost had reported how ordinary Hindus in Kerala such as tea sellers and cab drivers were targeted for speaking in favour of CAA and NRC which are not even remotely connected to any Bharatiya citizen let alone Muslims. A similar call for boycott has been given by Samajwadi Party MLA Nahid Hassan. While on the one hand secular state governments crackdown on Hindu fruit sellers for simply putting up saffron flags and images of Hindu deities, on the other Islamists are given a free run to target Hindu shop owners which is not just defended by so called liberals but any logical counter of such a dangerous trend is simply labelled as ‘Islamophobia’ in a bid to silence the critics.