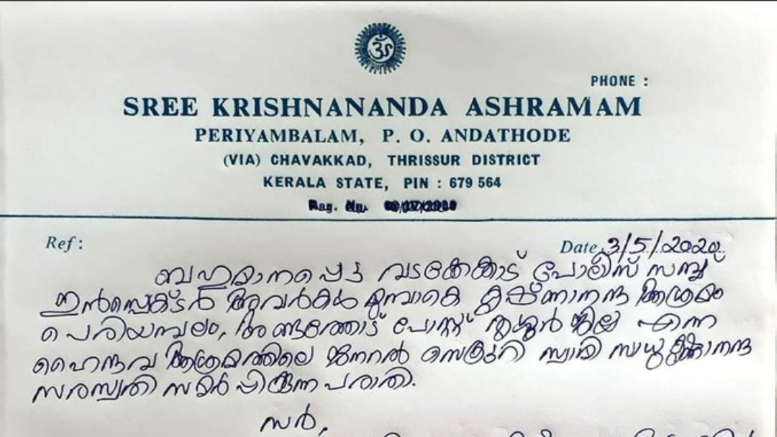 Minority appeasement in the name of secularism has become so deep rooted in the society that Hindus are expected to carry the burden of ‘maintaining the secular fabric’ in the country and that too at the cost of their customs and rituals. While Muslims face no problems in Hindu majority areas, the same courtesy is never extended to Hindus where Muslims are in majority. The latest example of clamp down on Hindu rights in Muslim dominated area comes from Chavakkad in Kerala’s Thrissur district where Hindus were asked to stop chanting prayers by Muslims.

Muslims have asked a temple in Thrissur, Kerala to stop chanting prayers through loudspeakers because it is a Muslim majority area.

This is the complaint filed by the temple authorities.

Why are only Hindus expected to be secular? Don't we deserve some respect and dignity? pic.twitter.com/9zs0SVZNpQ

The incident occurred at Krishnananda Ashram of Periyambalam. Swami Sadhu Krishananda Saraswathi, the General Secretary of Krishnanda Ashram has submitted a written complaint to the Vadakkekad Police sub-inspector regarding the incident where two Muslims arrived at the temple on a bike when namajapa (chanting of prayers) were going on. The two, who refused to identify themselves, warned the temple authorities to refrain from chanting the prayers as the area was a Muslim dominant one. If this isn’t a violation of ‘freedom to practice one’s religion’ as enshrined in Articles 25-28 of the Constitution, then what is? The letter further requests the police to take appropriate action so that such incidents do not occur in the future.

Time and again Hindus have faced threats, intimidation, boycotts and have even been forced out of their homes where Muslim population has approached a critical mass. As many observers have often pointed out, when Muslim population exceeds 40% religious freedom of Hindus is severely curtailed. This incident once again confirms that unless Hindus stand united and fight back this minority appeasement by so called secular parties, such incidents would keep recurring.

The onus of secularism cannot be on Hindus alone and this message needs to be sent out to the entire political class ‘loud and clear’.