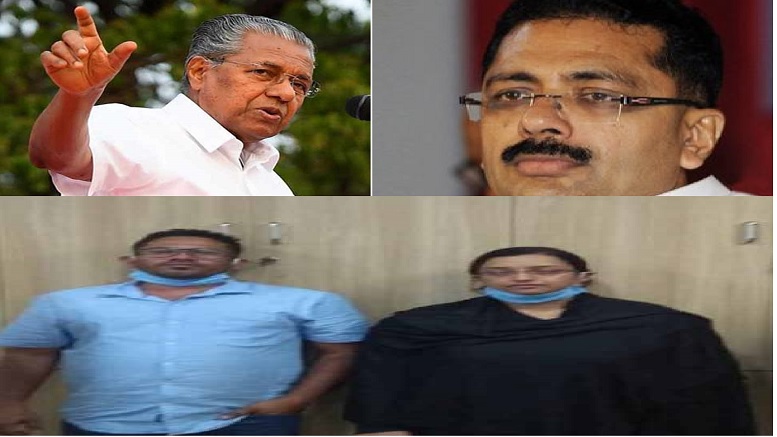 Following pressure from the state government, The Kerala Crime Branch unit had earlier registered cases against the Enforcement Directorate (ED) officials based on the statement of two women police constables. The women who were on Swapna Suresh’s security detail had stated that they overheard ED officials trying to ‘coerce and cajole’ accused Swapna to give statements to implicate the Chief Minister and others in the gold and dollar smuggling scams that have rocked the state. This fishing expedition by the state crime branch against the ED now stands quashed following Kerala High Court orders.

An earlier audio clip of Swapna too added to the confusion where she was heard repeating the same. That the audio was aired on left-aligned media was enough of an indication of the agenda at play. That investigation ended prematurely amidst allegations that the police department itself was behind coercing Swapna Suresh to create such a clip.

This is what the court had to say. “It is hence contended that the unbelievable narrative about the presence of women civil police officers while Smt. Swapna Suresh was questioned by ED officials, is nothing but a cooked-up story. The FIR and further proceedings of Crime Branch Police Station are quashed. The Investigating Officers shall forthwith submit all records pertaining to the crimes before the Special Court in a sealed cover.”

Swapna had repeated opportunities available to appraise the court if any attempts were being made by the ED to ‘coerce’ her, but she has never raised such a complaint. She was remanded to ED custody from the 5th of August and her remand orders were extended, first on 11th and later on 14th till the 18th. The Special Judge had interacted with all the accused and found that they appeared to be in sound health and mind and had no complaints.

Swapna’s lawyer had also alleged that her client was questioned by the ED Officials, without the presence of a woman officer. This contradicts the statement of the women police officers and puts them in the dock too.

The Special Court had also received a complaint against another accused, Sandeep Nair, and allowed the Crime Branch to question him in jail. The statement of Sandeep recorded thereafter was produced before the court in a sealed cover. The above judgment makes it pretty clear as to what Sandeep had to say in his statement.

The ED deputy director, P Radhakrishnan informed the court that the crime branch case was registered when it became apparent that important personalities were involved in this case. Other than Pinarayi Vijayan, the Kerala CM, Ministers like KT Jaleel, bureaucrats like M Sivasankar IAS, and the Assembly speaker P Sreeramakrishnan are all allegedly involved in this scam.

The Crime Branch wing of the State Police registering cases against the officers of a central agency alleging flaws and excesses during their investigation goes against the very concept of cooperative federalism. The Solicitor General added that such action if permitted will impair the conduct of the free, fair, and impartial investigation by the Central Agencies. The court dismissed the state version that this was a case of political vendetta.

Such moves by the communist regime have made it hard on themselves and the police department. Having allegedly participated in such anti-national activities, they tried to hunt down the same investigators who brought this fraud to light. The recent High Court order has made sure that the crime branch either concludes this farce of an investigation or it appeals to a higher court. The CPM government, left with nothing to lose, will probably opt for the latter.

The flip side is that ED is now preparing to investigate officers who participated in this whole crime branch sham and it is rumored that they will be charged under various sections. A police association leader who meddled in the matter, a Superintendent of Police attached with the Cyber Cell, jail authorities and crime branch members are all under the ED scanner. Such incidents are not exactly the kind of confidence boosters that a police force already reeling under the pandemic might have expected.

A few police officers had warned of the same when the state government had originally decided to proceed against the ED. The state Director General of Police too had the same apprehensions. Strict orders from the CPM regime were the only reason that such proceedings against ED were initiated by the crime branch, in the first place and that too just days before assembly elections.

A tainted former central minister from a neighboring state had earlier tried to hoodwink the central agencies and it ended up in the central agency sending in agents who jumped walls and arrested the accused. Will the Kerala Communist leaders’ fate be similar remains to be seen.

This comes at a time when the controversial minister, KT Jaleel was forced to step down after the Lok Ayukta confirmed nepotism. A related controversy is already brewing where it has now been revealed that Pinarayi himself signed an illegal rectification in eligibility criteria originally designed by Jaleel to appoint his close relative to a lucrative bureaucratic position. It is also a pointer as to who actually ruled Kerala, the SIMI, or the CPM. Pinarayi seems to have worked hard to promote and protect Jaleel and at the same time has been ruthless against others in his close coterie. Why?