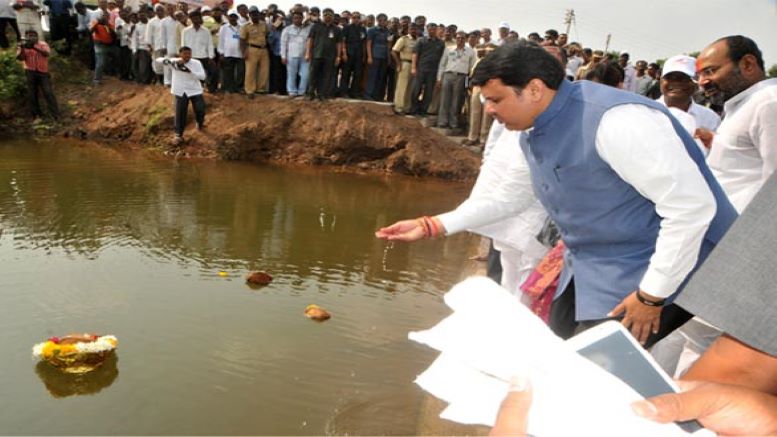 Jalyukt Shivar, the flagship water conservation project initiated by former CM of Maharashtra and the current leader of the opposition (LoP) Devendra Fadnavis has been cleared of all charges of corruption by the panel appointed by the Uddhav Thackeray-led MVA (Maha Vikas Aghadi) government.

The scheme launched by former CM Fadnavis has been under the scanner ever since the MVA government came to power. There were allegations of the scheme not being technically sound in addition to several ‘malpractices’. The scheme has now been given a clean chit by the pane appointed by the Maharashtra government says an ABP Majha report.

The water resources department has also published a report stating that the Jalyukt Shivar has helped agriculture and brought about an improvement in the standard of living of the farmers. The report further says that the scheme has increased the income of farmers. The report has been prepared after evaluating 58,000 out of 1,76,284 waterworks.

In December 2020, a four-member panel had been appointed by the Maharashtra government stating that there had been ‘corruption’ in the scheme. Several ministers of the Thackeray government had sought an investigation citing the CAG report pointing out ‘irregularities’ and ‘experts’ who had alleged that the works under the scheme had been done in an ‘unscientific’ manner.

A report by Hindustan Times in the matter stated:

The cabinet in its meeting on October 14 had decided to conduct the probe into the alleged irregularities in the Rs 9,634 crore scheme, which was implemented in 22,589 villages between December 2014 and March this year. The CAG found holes after inspecting 1,128 works allotted under the scheme failed to achieve its aim. The report was tabled in the state legislature on September 8.

According to the government resolution issued on Tuesday, the probe panel will be headed by retired additional chief secretary Bijay Kumar, and will comprise additional director general of anti-corruption bureau (ACB); chief engineer of water resources department Sanjay Belsare and director of soil conservation and watershed management.

The CAG report tabled in the state legislature on September 8 slammed the Fadnavis government for its failure in implementation of JSA, envisaged to make villages in Maharashtra drought-free. Besides the deficiencies in planning and lack of provision of adequate funds for maintenance of works, JSA failed to achieve water neutrality in drought-prone villages and increase the ground-water level as intended, CAG’s report stated. Despite spending ₹9,634 crore, drought-hit areas ended up deploying more tankers than in the past, the report said.

Interestingly, a report tabled in the Maharashtra assembly last year also deemed the project to be a successful one as several villages were reported to have become drought-free. “Economic Survey report of 2019-2020 in State Assembly which revealed that around 19,655 out of 25,000 villages had become drought-free in the State in last 5 years under the Jalyukta Shivar Project. The Jalyukta Shivar scheme also helped create a water storage capacity of 26.52 TMC (thousand million cubic feet) in Maharashtra”, reported OpIndia.

It is also important to point out that the Thackeray government had blocked funds to the scheme and termed it to be ‘substandard’. In January last year, reports stated that the MVA government has decided not to release funds for the Jalyukt Shivar projects in Nashik, Dhule, Nandurbar, Jalgaon, and Ahmednagar districts.

“The most inefficient MVA government has initiated another probe but only truth will come out of it. In the first place, CAG had examined only 1,128 of the total 6.42 lakh works allotted under the drive. This means the remaining 99.83% of works were not examined. The report has not found any scam or corruption, while on the contrary, it has accepted the fact that many villages became tanker-free and it helped farmers to take the second crop,” BJP spokesperson Keshav Upadhye had stated back then.