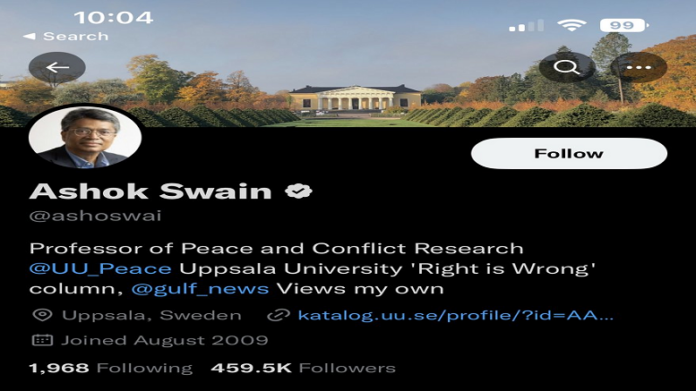 Read below on how Ashok Swain and his Pakistani and Khalistani friends tried instigate Black people all over the world to attack Hindus, using the news of “Nigerian students being attacked” attacked in Gurugram.

Tensions flared between student groups at GD Goenka University in Gurgaon where around 50-60 Nigerian students allegedly left the campus “temporarily” after some of them were allegedly thrashed and threatened by Bharatiya students over a football game. Police have registered an FIR on both groups and college has suspended 10 students who were involved in this brawl. Investigation is ongoing.

Since then things have normalized and the students have returned and pursuing their studies.

On 17th October Ashok Swain tweeted this video without giving any context and insinuated it was one sided unprovoked attack on Nigerian students, which it was not.

Right on cue, Pakistanis and Khalistanis on social media picked this up, started spinning their narrative, instigating black people all around the world to attack Hindus.

One such attempt was a 12 hour long Clubhouse room by Pakistanis and Khalistans, enlisting the help of an African American mod.

In this room Pakistanis stayed in the background and let the African American mod and a foul mouthed Khalistani lead the attack on Hindus. they were trying to set the narrative that Nigerians were attacked because they were black, as you can here in this clip.

The title of the room “Black/African Hate: A Violent Sickness In Hindu-India” explains it all. They were trying to instigate black people to attack Hindus.

In this clip, you can hear one African American gentleman asking Nigerians to inflict violence on Hindus in their country.

This is not an isolated incident. this should be see in the context of Pakistan’s desperate attempt to malign Bharat/ Hindus/ BJP/ RSS for long time with a dedicated “cyber army”.

(This article has been compiled from the tweet thread originally tweeted by Sandeep Neelakanta (@SanUvacha) on October 29, 2022.