Former BJP MP Mahavir Bhagora who died of COVID, had represented a reserved ST constituency and was given a Christian burial 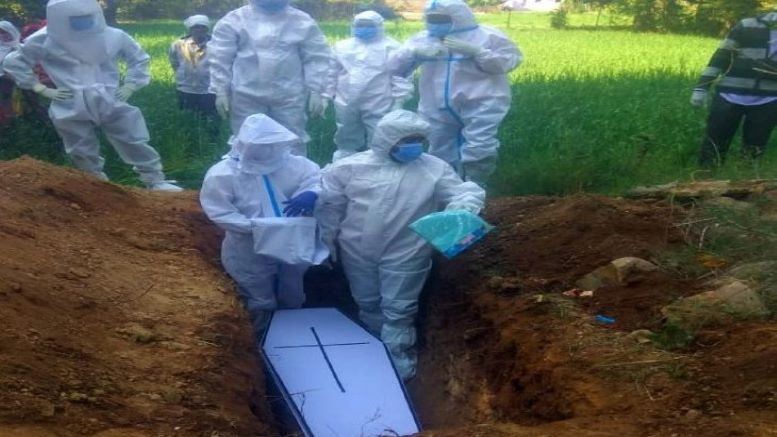 BJP MP Mahavir Bhagora who had represented an ST (Scheduled Tribe) reserved constituency and had got elected as a representative of the Meena tribal community died of the Chinese Virus on 16 January 2021. What came as a shock to many was that the final rites of Bhagora were conducted in his ancestral village as per Christian rituals.

Hindi news portal Falana Dikhana reached out to the Bhagora’s son Ashish Bhagora to understand why he was buried as per Christian rituals. The news portal’s report quotes Bhagora’s son as saying that his father had converted to Christianity long back and hence he was given a Christian burial.

It must be mentioned here that unlike SC (Scheduled Castes) communities, STs can continue availing reservation benefits even after conversion to Christianity or any other religion. Many observers have called this rule a travesty of social justice norms, as it emboldens the Christian missionary mafia and facilitates cultural genocide of fragile and beautiful indigenous tribal religions and belief systems.

Tribal groups in states like Jharkhand and Chattisgarh have demanded that those who convert to Christianity should lose reservation and other benefits. A Karnataka MLC from the Siddi tribal community had last year questioned the classification of Siddis who had converted to Islam or Christianity in the Scheduled Tribe (ST) category, stating that they were drawing both ST and minority benefits.

Before joining politics, Bhagora was the deputy director of Mahavir Samaj. Subsequently, he fought elections from the Salumber Loksabha reserved seat in which he was defeated. In 1993 Bhagora became the MLA after winning from Gogunda reserved seat. Bhagora was also given a ministerial berth in the then BJP CM Bairon Singh Sekhawat’s government.

However, he managed to win the Salumber seat in the 2004 general elections. In 2008, that constituency was abolished as part of a delimitation exercise.

It is also worth reminding readers that Mahavir Bhagora had made headlines during the ‘cash for vote’ scandal. This was an attempt by the UPA-1 government to buy votes during a no-confidence motion moved against it in 2008 after the Left Front withdrew their support over the Indo-US nuclear deal. Many opposition MPs were offered huge sums of money, and three BJP MPs, including Bhagora, had waved bundles of cash in the Loksabha on 22 July 2008 accusing the government of trying to buy their support. The handover of cash to the BJP MPs had also been recorded as a sting operation by CNN-IBN but the Rajdeep Sardesai-led channel backed out at the last minute from broadcasting the sting.

Bhagora’s Christian burial and his conversion to Christianity has triggered a war of words between BJP and its parent body RSS says the Falana Dikhana report quoted above. Both the organizations have distanced themselves from Bhagora and his belonging to the Christian faith. However, it has put both organizations in a fix since they are against religious conversions and the rights of Dalits and tribals being usurped by converts.

This case also highlights how crypto-Christianity is not limited to Andhra Pradesh or Telangana. Even ex-CM of Chhattisgarh Ajit Jogi, who passed away last year, had been using the tribal status to fight elections from reserved seats. However, tribal leader Sant Kumar Netam and others challenged his tribal status long back, and in 2019 a Chattisgarh govt. committee ruled that he was not a tribal but belonged to a Scheduled Caste. By his son’s own admission both Ajit Jogi and his wife had embraced Christianity, which would mean that he would not be eligible for SC reservation benefits.

In fact, the political grapevine suggests that Jogi went to the same church as Sonia Gandhi when he was a Rajya Sabha MP in Delhi between 1986-1998, which made him a close confidante of the Congress first family and aided his appointment as Chattisgarh CM in 2000.

Only last year a legal rights body had written to President Ram Nath Kovind against the Andhra Pradesh Home Minister Mekathoti Sucharita who apparently misrepresented herself as a Scheduled Caste Hindu to contest elections from the SC reserved Constituency (Prathipadu – Guntur district), even though she has converted to Christianity.

Crypto-Christianity as also misuse of reservation benefits of Hindu SCs by those having converted to Christianity, by both the commoners and politicians as seen above, is an issue that needs to be addressed with urgency.

The article has been updated at 1300 hrs, 21 Jan with some additional facts and commentary.