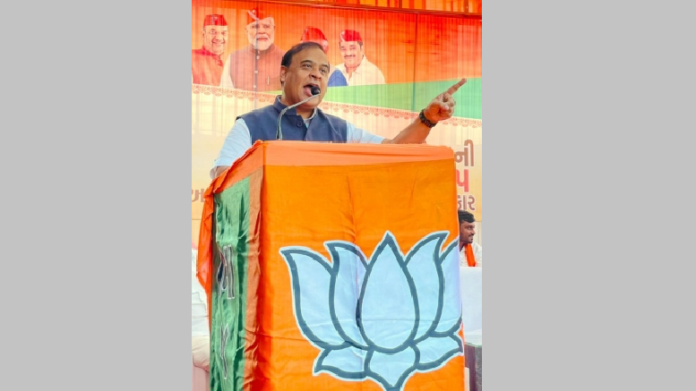 Of the few BJP states where there has been strong pitching for implementing the Uniform Civil Code (UCC), Assam is one of them with Chief Minister Himanta Biswa Sarma vociferously campaigning for this law to be enacted.

In the last few months, Sarma said a number of times that UCC is a need of the time.

He had earlier remarked that “no Muslim woman in the country wants her husband to have three wives. You can ask any Muslim woman. No one will tell that her husband should marry three women”.

Sarma insisted that a Muslim man marrying more than one woman was not his problem, but of Muslim mothers and sisters.

He said if Muslim women and mothers have to be given honour in society, after the triple talaq law, the UCC has to be put in place.

“I am a Hindu and I have the UCC for my sister and daughter. If I have UCC for my daughter, then Muslim daughters must also have been given that protection,” he claimed.

According to Chief Minister, the law should be implemented in the greater interest of Muslim women otherwise polygamy would continue.

“If Uniform Civil Code does not get implemented, the polygamy system in Muslim society will never stop. A man will forever marry three-four times, curtailing the fundamental rights of a woman.”

While campaigning for the BJP in the recent Delhi MCD elections and the Gujarat Assembly polls, Sarma repeatedly insisted on enacting the UCC in the country.

The UCC means that all people irrespective of the region or religion they belong to will be under one set of civil laws.

It is mentioned in Article 44 of Part IV, Constitution of India. The part contains Directive Principles of State Policy (DPSPs). These provisions are not enforceable but are meant to serve as the guiding principles of legislatures.

“The state shall endeavour to secure for the citizens a uniform civil code throughout the territory of India,” says Article 44.

While DPSPs are not enforceable, several provisions listed under it have been made into laws in the years since the Constitution was enforced in India.

Speaking to IANS, Hafiz Rashid Ahmed Choudhury, a senior advocate of the Gauhati High court and working member of All India Muslim Personal Law Board (AIMPLB), said: “DPSPs were enforced earlier when there was an outcry to introduce e new law. But, with UCC this is not the situation. Everything that is being said now is with a political motive without concern about society. Therefore, I oppose this move.”

“If UCC is being brought for the betterment of Muslim women, where was the demand from them to enact this as law?” he asked.

Choudhury warned that introducing the UCC will bring fresh disputes in the society and being a sensitive state Assam may face a backlash.

However, he supported the scrapping of Triple Talaq and said that if Government feels any need then they can bring some amendments to the existing law.

Many Muslim intellectuals in Assam agreed with Choudhury’s deposition and they have echoed the same voice.

All India United Democratic Front (AIUDF) leader Rafiqul Islam said: “India is a country of different castes and communities. There are different laws of different religions. If the Uniform Civil Code is implemented then it will create problems for the country.”

He alleged that the ruling party wants to target the Muslims in the backdrop of UCC.

But Dr. Rajdeep Roy, a BJP Lok Sabha MP from Silchar, disagreed with this argument and suggested that the UCC should not be looked at only through the prism of politics and religion.

He said: “In India, we have multiplied vigorously in terms of population in the last 100 years. Of course, the Muslim population has grown much higher than Hindus. But, this is not about the community and religion.

“In coming years, there will be a shortage in resources like drinking water, food, etc. in the country if we grow in the same earlier proportion.”

Roy further mentioned that the UCC should be enacted in the country to ensure equal rights on resources whether it is human or other assets.