AAP’s evolution has an uncanny similarity to Orwell’s Animal Farm! 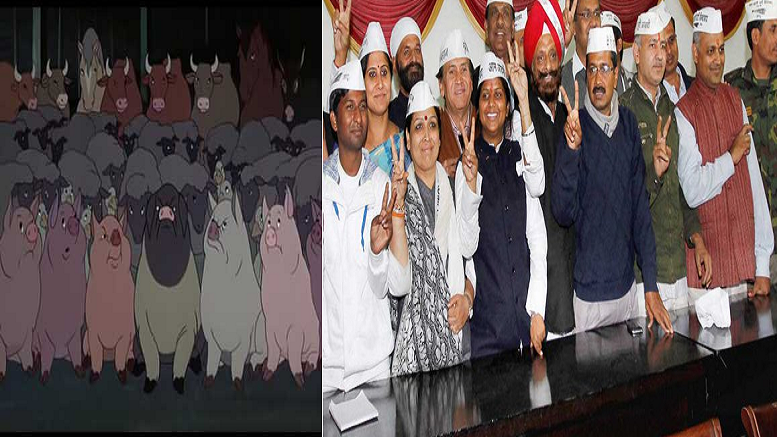 No party on this planet parallels Orwell’s Animal Farm than Bharat’s Aam Aadmi Party, the AAP. From its idealistic roots to opportunistic power struggles, and eventually becoming consummately the corrupt force it was supposed to fight against.

In both stories, we start off with a principled old leader who rises up against the corrupt regime, inspiring common folks (aam aadmi) across the land. He attracts various disciples who claim to be his greatest followers.

Eventually, the old leader would fade away, soon replaced by upstart leaders who deviate from his path. Anna shunned political parties, but many of disciples saw a party as the only way to make a difference. Soon a group of rebels would create the everyman’s party, the AAP.

3 pivotal characters emerge. Enter the idealistic leader, who wanted better for all. Vishwas Kumar Sharma would change his name to Kumar Vishwas as a message of moving beyond caste and unity. He saw the AAP as a vehicle for a future, better, modern Bharat.

Next is the opportunist. Abandoning Anna’s principles in the pursuit of power. Arvind Kejriwal would helm the AAP and banish rivals such as Vishwas and others, just as Napoleon did to Snowball, bending rules on whim and becoming corrupt as his priors.

Of course every “hero” needs a sidekick. Slick talking Squealer was the propaganda arm of Napoleon while Kejriwal would find his in “handsome” Manish Sisodia. Ramble rousing and propagandizing extraordinaire, Sisodia would become Kejriwal’s right hand.

With Snowball’s idealism out of the scene, Squealer spun all that was good on the farm solely due to Napoleon and all that was bad on internal rivals & outside forces, regardless of the truth. Napoleon elevates his pigs as the 1st among equals. The inner circle has extra privileges

The farm continues to deteriorate but Squealer and Napoleon carry on the propaganda, they control all the information with little rivals. They change Old Major’s principles incrementally. They bring out the gaslight and trick the populace.

The farm battles its old owners again and comes out on top, but at the cost of much. His underwhelming performance is covered by propaganda & the antipathy of the farm towards old owners. He pawns off his soldiers to cover his own greed and failures.

Time passes by and eventually the pigs begin to resemble their human masters. They walk on 2 feet, enslave other animals, and begin to take to the bottle.

How ironic that it is the bottle that now floods Kejriwal’s camp in a corruption scandal that looks more Congressi than any.

(This article has been compiled from the tweet thread originally tweeted by The Emissary (@TheEmissaryCo) on August 30, 2022.)