Yet Another Hindu Girl Brutally Murdered by her Muslim Partner, Despite Converting to Islam This tragic case of ‘Muslim man kills Hindu girl’ comes from Nagpur. A 19-year-old aspiring model, Khushi Parihar was her Hindu name, met a Muslim man Ashraf Sheikh (aka ‘Aashu’) in March this year. In a few months, he trapped her in a love trap, and made her convert to Islam. She converted, and took the Muslim name ‘Zara Shaikh.’  Proudly and loudly on her social media accounts she proclaimed her love for Ashraf Sheikh. 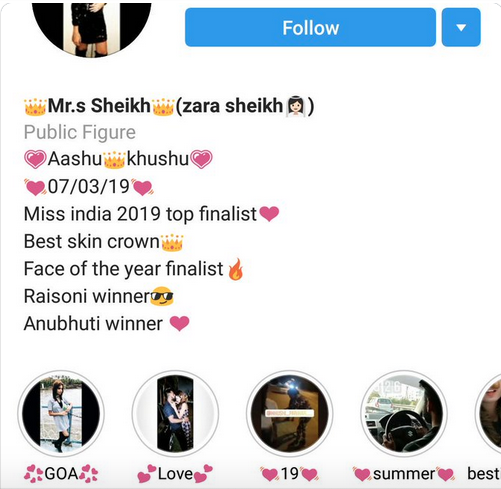 On 12th July, Ashraf Sheikh brutally murdered her by smashing her head first with a tyre wrench & then with a stone. She was not even 20 years old. She had her whole life ahead of her, a promising modelling career. She had family that loved her.  All that was brutally snatched away by her Muslim boyfriend & live-in partner.

And by the way, this fellow Ashraf Sheikh, with fancy hairstyle and everything, is the son of a known drug peddler.  That is where he got money to “improve his looks and lifestyle” to trap a Hindu girl. The girl fell for the trap, and paid for it with her life. When will this cycle end? When will indoctrinated Muslim men stop preying on non-Muslim girls, who they view as ‘easy meat’ unlike the ‘proper’ Muslim girls who they ensure are covered from head to toe? When will the violence upon Hindu women end?

When will this asymmetric relationship between communities end, where one religion views non-believers as inferior beings & bars marriage with non-Muslims unless they convert, while Hindus are brainwashed with secularist ‘all religions are equal’ propaganda & taught to regard inter-religious marriage as a sign of modernity & progressivism?

And in case you are wondering, the English media simply reported it as a “secular” case.  No mention of the love jihad angle here. See the ToI headline: completely “sanitised.”  Not only that, it calls the victim by her original Hindu name, not even mentioning that she had converted to please her Momin boyfriend, only to have her faith returned with a huge stone that he used to bash her head in. He also destroyed the evidence and misled the police. The only way the police were even able to identify the beautiful model was by 3 tattoos she had on her body!! This is the price of beauty for a Hindu girl who falls prey to such Muslim men. I remember clearly the words of a Hindu father whose daughter was kidnapped and forcibly converted in Pakistan by Muslims. He said “her beauty went against her.” The same is true in Bharat too, sadly.

If you are the parent of a Hindu girl, I implore you: teach your daughter about fundamentalist Islam and the fate which befalls such relations after the girl is trapped with nowhere to turn. Teach her that she may already have been targeted for “love trap” and conversion. Teach her the horrible life and frequent death of these poor innocent Hindu girls who fall into these traps.  Please save her. We have lost enough girls already.