Will NGOs & Judiciary Take Cognizance Of Injuries To Children During Muharram? 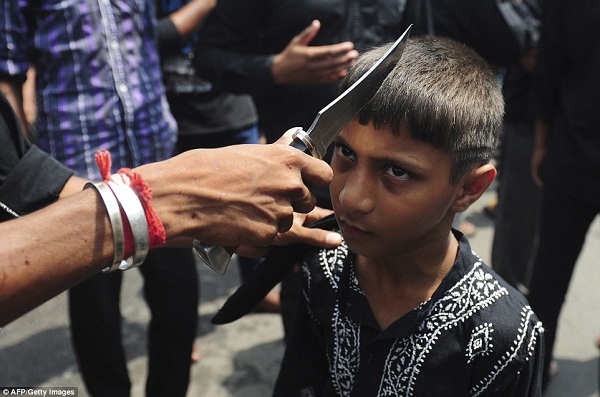 Ashura, the 10th day in the month of Muharram, was observed yesterday across the world, and also by the Muslims of Bharat. For Shia Muslims, the day of Ashura is also the day of mourning and self-flagellation for Husain ibn Ali, a grandson of the Prophet Muhammed who was killed in 680 CE at Karbala, which is modern-day Iraq. In Sunni Islam, Ashura marks the day that Moses and his followers were saved from Pharaoh by God by creating a path in the Red Sea. Other commemorations include Noah leaving the Ark and Muhammad‘s arrival in Medina. However, some Sunni Muslims take ‘Tazia’ ( representation of Husain’s tomb) processions as a mark of respect. In certain interior regions of Madhya Pradesh and Chhatisgarh, it is heard that few Hindus also participate with Muslims in these activities and rituals.

The most appalling part of these rituals is when children and young boys are injured to celebrate this festival, the mourning. Let us see some pictures of Muharram mourning 2016 from different cities of Bharat :

While children are slashed and made to bleed much lesser than grown up young boys and men across the world, the violence indulged into by the grown-ups can be very disturbing to see :

The above pictures are of yesterday’s Muharram processions across the states of Bharat. Though it is of course own prerogative of Muslim community to self-flagellate and shed own blood, but the same logic has not been applied to any of the Hindu festivals targeted by NGOs and eventually restricted or banned by judiciary, specially the apex court of Bharat, the Supreme Court. Also, the fact that these self-injuries are inflicted in full public view is disturbing. Moreover, it is astonishing that NGOs and judiciary have failed to take Suo Motu cognizance of the same logic applied to Dahi Handi celebrations that little children (having subjected to cuts and injuries) obviously cannot decide for themselves at such young ages.

The celebrations of making human towers in Dahi Handi were restricted by Supreme Court this year by upholding the lower court’s verdict of banning children under 18 years of age to participate in human towers and restricting the maximum height of human towers to 20 feet. This festival has been targeted by various petitioners since 2010 and courts have heard these petitions citing the protection of child rights. The children and teens who participate in such human towers were unhappy about the verdict and perceived it as interference in traditional sports.

The maximum that Bhartiya judiciary and international NGOs working in Bharat have done to reform other religions than Hindu Dharma, is appealing politely to minority communities. Ultimately, no verdicts have ever even passed to restrict their festivals fearing back lash.

Not only Muharram mourning, there is a festival of Arabeen , also called Chehallum, which is again the Shia Muslim religious observance that occurs forty days after the day of Ashura.  Arbaeen or forty days is also the usual length of mourning after the death of a family member in many Muslim traditions. Arbaeen is one of the largest pilgrimage gatherings on Earth, in which up to 30 million people go to the city of Karbala in Iraq.

In India, Jaora in Madhya Pradesh in one such region where hundreds of people collect to again observe deaths of Muslims in the battle of Karbala. There is a shrine called Husain Tekri in Jaora where thousands of Muslims collect every year. Unfortunately, children too participate in self -injuring rituals like walking on hot coals to observe the festival. There are hardly any pictures that are published in mainstream media of this festival, specially self-injury by children.

So, either the NGOs and courts take responsibility to ask for and follow legitimate & justified application of laws across religions, or should leave the traditional festivities & sports of Hindu Dharma alone.

Minor girl Chanda’s parents not allowed to meet her at ‘shelter home’, but her Baloch abductor is! ‘Liberal’ Dawn newspaper downplays abduction