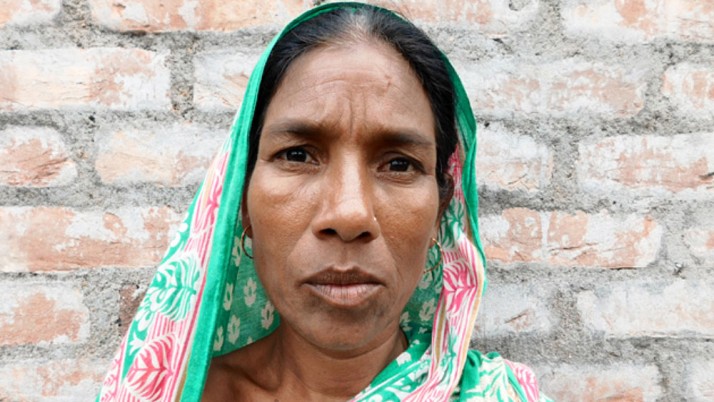 A resident of Kalikahar village in Murshidabad district of WB, Sahanara Bewa, has alleged that TMC Panchayat member Fulsura Bibi has deducted more than half of the 20,000 rupees received as compensation, after the devastation following the super cyclone Amphan that had hit the state last month.

An investigation has been initiated to look into the matter and appropriate actions will be taken if the allegations against the Panchayat member are proved, authorities claimed. The complainant further alleged that if one doesn’t agree to pay off the ‘cut money’, one doesn’t get any part of the amount.

The fragile little hut by the roadside of Jalangi’s Kalikahara village in which Sahanara lived with her widowed mother, crumbled down under the fury of the super cyclone. Panchayat member Fulsara Bibi showed up the next day and clicked several pictures of Sahanara’s demolished hut and assured that she will receive help from the government. As promised, she received 20,000 in her bank account about 10 days ago and encashed the money from the bank after giving a thumb impression.

“But Fulsara Bibi’s husband Sajidul Sheikh was standing outside the bank and as soon as he saw me with the cash, he snapped it out of my hand and said that this money was brought in for a different plan through my bank account,” Sahanara said.

When Sahanara protested and told others in the area, she was given 2000 rupees (out of the total 20000)  by the Panchayat member’s team, but she refused to budge down and decided to fight back. She was then given 8000 rupees more. But demanding the full compensation of 20,000 that was provided by the central government, Sahanara filed a complaint with the BDO.

Jalangi BDO Kautav Kanti Das admitted receiving the complaint about grabbing of “cut money” (bribe) against Fulsura Bibi. “We have started our investigation into the matter. If the allegations are proved, we will take actions against the accused Panchayat member,” he stated.

On the other hand, Panchayat member, Fulsura Bibi has refuted all accusations, “The allegations brought against me are all unfounded and are being leveled against me due to political rivalry.”

Snatching ‘cut money’ from the poor in this CPI(M)-dominated area is a common practice by the TMC members, informs local committee member Imran Hossain. “But poor villagers are scared of submitting a written complaint against the ruling party,” he adds. Jalangi Block President of TMC, Rakibul Islam, acknowledged the complaint by Sahanara and stated that an investigation is being conducted internally as well.

Residents of West Bengal have been suffering TMC members snatching ‘cut money’ for years but it is only recently that Bengalis have summed up the courage to question the authoritarian government on the malpractices that have been prevalent since the beginning of the Mamata Banerjee-led administration gained power in the state. The noise being made on the ground and in social media has alarmed the corrupt administration which is in damage control mode now.

Seeing the issue gain national attention, the TMC supremo has warned party members against taking any ‘cut money’ from state residents, especially the poor villagers who are largely targeted for ‘cut money’. She has also directed the party members to return money if taken, to cover up the matter.

But the piled up resentment of the poor villagers who had been silent for so long, burst out when TMC representatives started claiming a lump sum from the compensation packages sent to the devastated villagers left hungry and homeless after the cyclone Amphan. Despite warnings by the TMC chief of,  sundry leaders in remote areas are still regularly engaged in the corrupt practice.

Old habits die hard and TMC groupies are evidently struggling to give up on the coveted ‘cut money’. Quoting a district leader of the party, “It’s not easy to do away with the practice of taking cut money for these members. But none of them are bothered about the elections the state is heading toward and that taking cut money from the people is damaging for the party’s image.”