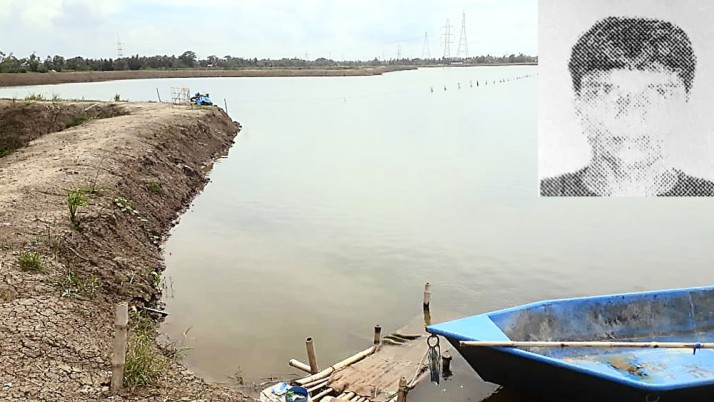 While many of us may have faced financial difficulties during the COVID19 crisis, Sheikh Zaidul Islam (32) of Sardabsan village, Kolaghat block of Purba Medinipur (East Midnapore) district, West Bengal, is thriving. He doesn’t hold any position in the ruling TMC party, but people of this area fear him, reports Bengali news outlet Anand Bazar Patrika.

The villagers know when it comes to grabbing land of poor farmers and converting it into fishing farms, Zaidul and his accomplices are peerless. Islam is confident of his unquestioned power. Without any fear of law or government, he claims, “I will take land from the farmers by force. If they disagree, the land will be seized. If they retaliate, they will be beaten. If needed, they will be tied to a tree and their thumb impressions will be forcefully taken.”

The district has seen enough bloodshed already. TMC leader Nantu Pradhan was killed ahead of the Panchayat elections and his death is allegedly linked to the construction of a fishing farm in Bhagwanpur. One may wonder, where does Zaidul get this audacity. With absolute impunity, Zaidul states, “Be it police or government higher-ups, everyone functions as per our commands. The police officials will lose their jobs if they go against our interests.”

Interestingly, various organizations have lodged complaints with the district level officials against the rapid increase in fishing farms at the cost of farming lands. But none have dared to name Zaidul as the key force behind this irregularity in the complaints.

Even Nandigram is witnessing an aggressive rise in fishing ponds made by grabbing farming land forcefully. A lot of investment is flowing in from different unidentified sources into the fish business. These illegal funds are directly going into the hands of the likes of Zaidul.

Ironically, Nandigram is the place in Purbi Medinipur which propelled Mamata Banerjee to Chief Ministership – it was here that Mamata led locals in 2007 to defeat the then communist government’s plan to acquire land for a special economic zone (SEZ). 14 people died in police shooting & Mamata and her TMC party cleverly capitalised on the issue with her Ma Mati Manush (Mother, Motherland and People) slogan to come to power in 2011.

Zaidul was a carpenter during the communist regime, and has also worked as a contractor for a brief period. But he stepped into the business of ‘land brokerage’ after TMC gained power in the state in 2011. His tiny shack transformed into a grand house overnight. He bought an expensive bike, started wearing costly sunglasses, fancy clothes; he would be accompanied by an overpowering entourage of 20-25 members. The gang’s dominance becomes apparent during elections. It was because of their dominance, even during the nationwide lockdown, that Kolaghat remained opened and the construction of fishing farms was carried out in full swing.

Land-grabbing has become common in other areas of the district like, Vrindavanchak, Bhogpur, Deriyachak, Kola, and Khanyadihi. All these grabbed lands are being used for cultivating fish, but without any changes to the existing plans and designs made with consideration towards farming needs. Ashis Berar, deputy director of the district agriculture department, dreads that this unlawful encroachment upon farming land could lead to food-shortage in the future. The land is also losing its cultivability.

Though Zaidul uses the names of TMC leaders to command power in his area, Kolaghat Block President Ashit Bandopadhyay refuses to acknowledge him. He asserts that he has not received any complaints against Zaidul either. When reported that Zaidul touts the names of TMC leaders to keep the commoners threatened, Bandopadhyay  wriggles his hands off the matter, saying, “ask those who he names.”

However, Samit Bera, President of Trinamool’s Sardabsan agrees that Zaidul is a supporter of their party. Dismissing the allegations brought against Zaidul, he presents Zaidul to be a mere mediator who convinces farmers to sell their land to the right buyer and makes some money in return.

On the other hand, Trinamool district president Shishir Adhikari issues a clear statement, “The party is against taking land by force. The administration will take action if anyone wants to take land by force. ” Atish Biswas, SDPO of Tamluk also assures to act strictly upon any complaint against Zaidul.  Zaidul laughs off these statements saying, “Who will complain? Who has the guts?”

Along with cut money (bribes taken from govt. compensation to the poor), land grabbing is another tactic of harassing the poor by the powerful ruling class in West Bengal. While some such illegal dealings happen publicly, others take place in a clandestine mater. In the end, it’s the commoners who are being exploited by leaders at all levels of Bengal’s politics.

Bharat’s elite left-liberal intelligentsia, who make mountains out of molehills when something occurs in a ‘communal’ (i.e. BJP-ruled) state, are eerily silent over the deep-rooted criminalisation of politics in ‘secular’ states like West Bengal and Kerala.