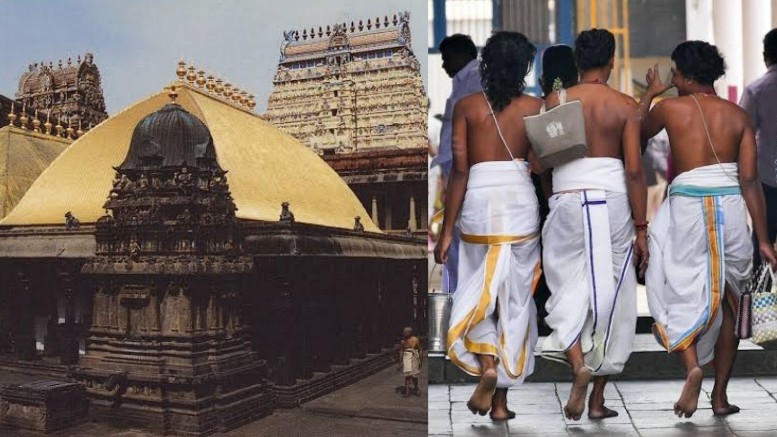 20 Chidambaram Podhu Dikshitars have been booked under SC/ST atrocities Act allegedly for abusing a SC woman. Dikshitars have been running the Nataraja temple in a stellar manner which has been an eye sore to DMK. As soon as coming to power HRCE minister had said that the government will *take initiatives” to bring Chidambaram temple back to its control. The latest developments are seen as an attempt to smear Pothu Dikshitars to take over the temple.

Chidambaram Nataraja temple, the only ancient temple in TN not under HRCE control owing to its unique traditions, is in the news because Dikshitars who run the temple allegedly abused and misbehaved with a woman. The woman, an SC, has filed a complaint under SC/ST Atrocities Act on 20 Dikshitars alleging that they abused her using her caste name. However Dikshitars deny these charges as false.

In 2019, one of the Dikshitars, Darshan, was in the news when he slapped a woman devotee for his indifferent attitude while doing puja. This Darshan and his father Sakthi Ganesha Dikshitar seem to have some grouse with the other Dikshitars. As per the version of Dikshitars who are part of the administration, Darshan was dismissed from the temple and levied penalty for his conduct in 2019 and bringing bad reputation to the temple administration.

Irked by this his father and himself have been itching to find an opportunity to avenge the other Dikshitars. Since Covid-19 pandemic started becoming a serious issue, the administrative committee of Dikshitars had decided to not allow anyone except the Dikshitars on the Chitambala Sabai, an elevated structure from which devotees earlier used to get darshan of Nataraja swamy. After Covid-19 norms were eased and temples were opened for public darshan, reportedly Sakthi Ganesha Dikshitar proposed that devotees should be allowed to climb the elevated structure like old times.

Ganesh Dikshitar allegedly took a Siva bhakta a few days ago and demanded that he should be allowed to get on Chitambala Sabai to get darshan. But it is banned for everyone except the pujaris in the temple. So he was not allowed and Ganesh created ruckus despite knowing this fact. Similarly his son Darshan brought a woman, Jayaseela, a few days later and tried to take her to the Chitambala Sabai. But Dikshitars stopped her and sent her down as it is still not allowed owing to Covid-19 norms in place.

However he too created a ruckus alleging that there is “untouchability” in the temple and that Hindus of different castes are not allowed to get darshan. With his help, the woman, an SC Hindu, lodged a complaint with the local police under the SC/ST Atrocities Act on 20 Dikshitars. These allegations have been refuted by the Dikshitars. Ayyappa Dikshitar who talked to the media said, “There is no untouchability in the temple. Christians come here, Muslims come here and Hindu devotees of every community come to the temple. We do not speak ill of anyone”.

He further said that “The decision to not allow devotees in Chitambala Sabai was made based on the unanimous vote of the majority of the administrative council members. There is a court order that no one can interfere in the temple administration or puja rules”. Recalling that Dikshitars had given a warm welcome to VCK chief Thirumavalavan who had darshan of Nataraja swamy from the elevated structure, he said that Dikshitars have never discriminated against anyone based on their caste.

Thirumavalavan is a rabid anti-Hindu politician who even called for demolishing Chidambaram temple and building a Buddha Vihar. He had organised a conference to “Uproot Sanatana Dharma” in which Congress leaders and TN CM MK Stalin graced the dias. Yet when Thirumavalavan went to the Nataraja temple during his election campaign, he is the MP of Cuddalore Loksabha constituency under which Chidambaram falls, he was welcomed by the Dikshitars as no one coming to get Bhagwan’s blessings are turned away.

Dikshitars were abused then, for felicitating an anti-Hindu. Despite that generous act they are abused now as well without caring for facts. Christian churches, of every denomination, have records of their followers. After all, they collect 10% tithe from them every month. A similar practice is followed by mosques as well, as they collect Zaka. Both churches and mosques know each and every regular visitor and can clearly identify new comers or outsiders.

But this is not the case for Hindu temples. Almost every major town in TN has at least one millenia old temple. Devotees from Kashmir to Kanyakumari throng these temples everyday. Except for their neighbours, relatives and friends, temple pujaris will not know who comes and goes everyday. When they don’t even know their name how would they know their caste to abuse them using the caste name? The truth is that, like Ayyappa Dikshitar said, even Muslims and Christians visit temples. No one would know that they belong to a different faith unless they wear an attire or accessory exhibiting it openly.

Coming back to the Chidambaram temple issue, in 1951, the TN government had appointed an Executive Officer of HRCE to oversee the temple when it wanted to “abolish” private running temples. Pothu Dikshitars went to the Madras High Court which ruled that the temple belongs to a religious denomination and thus the government cannot interfere. But the government tried to poke its nose again in 1982 alleging mismanagement of funds.

Dikshitars went to the court against this and were repeatedly turned down. Finally they went to the Supreme Court which ruled in favour of the Dikshitars in 2016. Pothu Dikshitars have been managing the temple without any issues since then. But it has been a thorn in the eye for the anti-Hindu DMK, and even before the party came to power, confident that they’ll win, Dravidianists demanded that Chidambaram temple should be taken over by HRCE.

Once the party came to power, wherever he went the HRCE minister was asked by the media whether Chidambaram Nataraja temple will be taken over by HRCE. In July he said that necessary action will be taken to bring the temple under HRCE control. He said “We have been conducting review meetings. CM has taken a special interest in this. Appropriate action will be taken at the right time”. DMK’s official Twitter handle shared this news which was widely appreciated by DMK sympathisers.

DMK and its associated Dravidian organisations are experts at poking Hindus with their own fingers and the current issue in Chidambaram temple appears to be of that nature. It is to be notes that SC, STs who converted to Christianity and are facing untouchability in churches, have demanded a separate rite for “dalit Christians”. But DMK and its allies are yet to make even a peep about it. Yet one staged incident in a temple is enough for their lap dogs to unleash hatred on Brahmins.