An adoption racket in Hyderabad was unearthed as a consequence of a raid by Goan police and childline NGO on Christian children’s home in Goa. A lady by the name Venus Habib who ran the place was arrested on the charges of kidnapping, torturing and assaulting 8 girls between the age of 11 and 12.

Laity of the church nearby the orphanage where some of the girls went, noticed burn marks on them and notified the childline NGO by calling 1098. Vasco police is alleged to have not responded to the complaint of law student Anu Joglekar who made the call to the childline NGO.

A police team along with a volunteer from the NGO raided two flats belonging to Ms. Habib and rescued the girls. 6 of the 8 girls were found with injury marks. The investigating officer said “the accused used to torture the victims regularly and assault them with a belt and water pipes”. They were also branded in their legs and hands using hot knives for petty reasons. Thankfully, medical examinations revealed that they were not sexually abused.

Initially, when the police tried to find documentation related to the adoption of the girls, they couldn’t find any. A team went to Andhra Pradesh to investigate the origin of the girls. The Hindu reported Sub Inspector Ritesh Tari as saying, “The police team is visiting Andhra Pradesh to find out if the accused adopted the girls or bought them from their parents.”

But a Telangana man who supposedly supplied the babies to Habib has been arrested and the police suspect that they might have stumbled upon an adoption racket. The name of the orphanage hasn’t been mentioned in any MSM report. But data shows that Venus Habib is associated with a UK based charity, Yashua Sanctuary.

Even though the UK charity’s website has been taken down after this incident came to light, the archived pages of the website and a leaflet issued by the charity organisation make it clear that all the donations received by them are spent towards the orphanage in Goa. 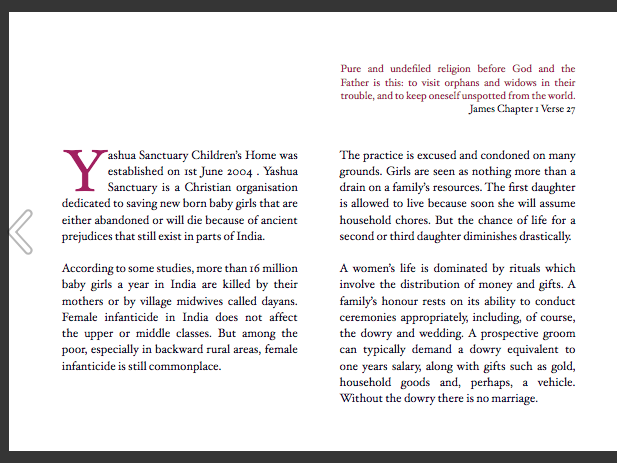 Yashua Sanctuary (‘Yashua’ is the transliteration of the original Hebrew or Aramaic name of Jesus) declares itself as a Christian organisation; it says that it supports a Christian children’s home in Goa, Bharat; it projects ‘backward’, tribal Hindus to be people ridden with ‘ancient prejudices’ that are cruel for a girl child. It doesn’t care to wear a secular mask and describes Hindu Dharma as a religion full of rituals that makes girl children undesirable for Hindu parents. It claims to save girl babies from infanticide.

The leaflet goes on to give a perfect example for a weak-hearted person to fall for such colonial-era propaganda and donate money, by saying that their first inmate was an illegitimate child whose father wanted to sacrifice her to ‘his’ god. Their website gives a somewhat similar version with cock and bull stuff like black magic thrown in to show how desperately the ‘heathens’ (non-Christians) need to be told the gospel and get rescued.

“On 10th September 2004 we received the first child of ‘Yashua Sanctuary.’ Hope was 6 weeks old when she came to us with her mother. The mother came from a good background and was widowed at a young age bringing up two sons on her own. She became involved with a man who enticed her with black magic and consequently led her to become pregnant by him. The father was then intent on sacrificing the child to their god because the child was considered lucky and would lead him to wealth.

The mother not wanting this to happen yet equally not able to keep the child because her community would have rejected her was desperately thinking of a way out of her situation. She then met a Christian lady who began to help her and suggested that the child could come to us in Goa, a two day train journey from her village.”

One would believe that even those who fall for such scripted stories would start seeing through the fraud after the recent exposes of exploitation of abuses in such children’s homes across the world. It is clear that such foreign-funded orphanages prey on vulnerable families at risk of breakdown and actively recruit children to ensure continued funding from foreign patrons who are still brainwashed by colonial-era atrocity literature regarding the ‘pagans and heathens’. But then, Hindus have been trapped in an educational system that has made them totally impervious to logic & blind to the subtle self-hate that is injected into them.

Both the website and the leaflet use our children’s photos to beg for money overseas. It is strikingly similar to the Mose Ministries Saga, where the children were taken to Germany and Poland to perform roadshows, street plays and prayers both in public places and churches to beg for funds.

In the thank you note of the leaflet, it is mentioned that the UK organisation is a fundraising charity specifically for the benefit of Yashua Sanctuary Trust in Goa, Bharat

The chair of trustees and the main coordinator is a woman priest. This so-called charity like any other missionary organisation claims to use other time-tested methods such as providing medical assistance and water facilities (borewells) to convert people living in remote areas.

Here is a picture of Venus Habib with the children from the UK charity’s website yashuasanctuary.org. The website is now deactivated, and this snapshot was obtained from internet archives (children’s faces blurred to protect their privacy) – Goa police found a Telangana man Pathlot Thakaria (60) to be the link between the parents and Venus Habib. This man allegedly procured infants for the children’s home. To the local media, the DSP said

“The so-called shelter home is not a registered shelter home. We have sought all the information from the department of women and child welfare. In the search of the flats what we have found is some photographs, some flat documents, property documents; we have attached the belt with which the children alleged that they were being assaulted; we have attached the water pipe and the knife which the lady used to make the knife hot and applied on the body of these children and gave them burns. We have attached the gas stove and also the cylinder and the flats are now sealed by the police…old marks are there as well as fresh marks. We have definitely taken keen interest in knowing all the facts and everything will be looked into. We are not going to show any mercy for this lady”.

Even though the police has done a good job so far, neither the name of the home nor the fact that it receives foreign donations, despite apparently not being registered as an FCRA organisation, has been reported anywhere.

Our colonized English language media manufactures fake stories to besmirch Hindu organizations running hostels & schools for riot-affected Assamese tribal girls, but none of them will outrage over the Western-funded missionary organizations preying on our vulnerable children. After all, how can a sepoy turn against the master who both funds and flatters?

Times of India (TOI) reported the investigating officer as saying, “Habib has said that she adopted the children and she was receiving ‘funds’ to take care of them” and that the police “thereafter began investigating the source of the income and also whether this income was the reason for the adoption”.

Venus Habib has claimed that she was only taking care of the children until someone could adopt them. But the UK charity’s website only talks about taking care of them and ‘keeping them away from certain death’ and nothing about adoption.

TOI further reported what the neighbours knew about the shelter home and Habib. “For years we have heard the cries of these children. She would beat them up badly. At night, they would scream asking Habib to not beat them”. Apparently she used to threaten them whenever the neighbours tried to intervene.

There seems to have been a curious incident when a girl, who Habib claimed was her maid, ran away and was brought back, tortured and found hanging the next day in her flat.

Goan police have traced the parents of two girls and sent a team to ascertain their identity through paternity tests. They have assured that they’ll find out all the parents and bring the case to its logical conclusion. It will be a happy ending when the girls are reunited with their parents.

Does it end there though? What of the involvement  of FCRA monies in such adoption rackets? The girls have been placed in a government shelter home ‘Apna Ghar’ for now. Few years back a government investigation revealed that children sheltered in such secular state homes were sodomized and security was abysmal. Will the cat that ruins the Bharatiya familial system to benefit from it, be belled at all?