Bhasurendra Babu : the man who wants to carve an independent country in Kerala 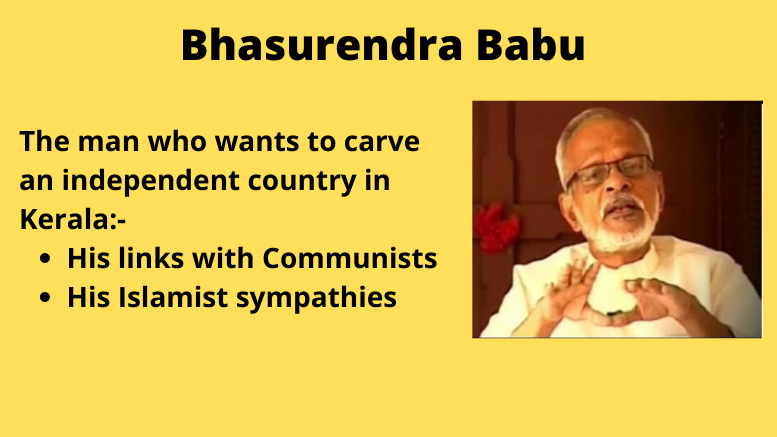 The anti-national ideology of leftists is well known to most readers. In the Gangadhar Adhikari thesis of 1940s, they wanted Bharat to be partitioned in multiple countries based on different languages at the time of independence. The present case shows that their goals have not changed since then and how they have teamed up with Islamists to carve and independent country in Kerala!

NGO based in Saudi Arabia

A controversial leftist journalist based in Saudi Arabia was recently seen exhorting his comrades to fight for an independent country in a particular state out of Bharat. The state in question is unsurprisingly Kerala and the ‘journalist’ is Bhasurendra Babu. As he himself admitted, the trigger for the comments of Bhasurendra is the bhumi-poojan  at Ayodhya on the 5th of August 2020. Bhasurendra was addressing a webinar arranged by a group called the Navodaya Cultural Centre, Eastern Province. It claims to be a cultural organisation of Keralites and is based in Dammam, Saudi Arabia. The organisation boasts of membership of thousands of people.

The topic for the webinar was “Post truth politics in the era of social media”. The guests of honour at the webinar included DYFI(a front organisation of CPM) State Secretary Sajeesh and Sunitha Devadas(an active CPM cyber warrior) amongst others. Many of the guest have Bharatiya passports, and are living comfortable lives abroad. Many of the participants were seen to agree with the seditious comments by vigorously shaking their heads when Bhasurendra was talking of carving an independent country in Kerala

The fact that Navodaya Cultural Centre did not come forward to condemn such ideas indicates their mute acceptance of the comments made my Bhasurendra at an institutional level. At the same time, the video was leaked and copies ultimately reached Janam TV office, which aired the same. This indicates that many members of Navodaya, may not agree with this ideology of separatism.

Bhasurendra allegedly came to prominence as a trusted associate of Pinarayi Vijayan a few years ago. The turn of the century brought forth some rifts within the CPM. Led by public campaigns against corruption and a squeaky clean image, VS Achuthanandhan had remained at the helm of the party. Pinarayi Vijayan (the current chief minister of Kerala) meanwhile had been embroiled in the various scams including the yet unconcluded SNC Lavalin corruption case.

Unlike earlier, the electronic media in the state was booming. In 2010, Kerala had about 20 TV channels with 17-18 more in the pipeline. Major political battles were now being fought on live news and this is where Pinarayi was helped by Bhasurendra.

Bhasurendra is an ultra leftist and a member of the Communist Party of India (Marxist-Leninist). Bhasurendra actively participated in CPI (ML) satyagraha in front of the Kerala Secretariat at Trivandrum in 2010. According to many sources, for Pinarayi, such urban naxal journalists had become a tool to further his politics. They could be made to parrot his thoughts on live news also had the element of plausible deniability. Their allegiance to CPI(ML) could be shown to say that Pinarayi had nothing to do with them. However, it must be remembered that even now Bhasurendra is a journalist associated with CPM run Kairali TV channel.

It has to remembered that both Pinarayi and Bhasurendra had openly supported terror accused Abdul Nasar Madani,  who was reportedly involved in various terrorist activities including bomb blasts all over Bharat! In 2012, speaking to a meeting of Islamists organised by Solidarity Youth Movement (a fringe group of Islamists based out of Kerala) Bhasurendra had termed Madani`s imprisonment an ulcer that hurts humanity.

He went on to add that the silence of the Muslims was only adding to the injustice being meted out to the poor man (Madani). He was of the opinion that the only evidence that the central agencies had against Madani was the mere fact that Thadiyantavida Naseer had spoken to him a few times over the telephone. It is to be noted that Thadiyantavida Naseer is a convicted terrorist of the Lashkar e taiba(LET) and is serving a life sentence for his role in 2006 Kozhikode bomb blast case which killed two policemen and a porter.

Bhasurendra conveniently forgot the fact that Madani was acquitted in 2007 for his role in the 1998 bomb blasts case in Coimbatore due to lack of evidence. Madani has been in jail since 2008 for his self-confessed involvement in the Bangalore blasts which incidentally happened immediately after his release from jail.

Pinarayi Vijayan and Bhasurendra : birds of a feather

It may be noted that in 2009, this was exactly what Pinarayi (the then CPM State Secretary) and Kodiyeri Balakrishnan (Home Minister and a supporter of Pinarayi) had said. He was being asked about his stand on the then CM VS Achuthanandhan informing journalists that both Madani and his wife were still under the shadow of doubt and that further investigations are necessary before clearing their names. Both were accused of having connections with terror outfits. Pinarayi had openly sided with Madani and had even allied with Madani`s party the Peoples Democratic Party (PDP) for the upcoming elections. VS had vehemently opposed this move.

In fact extraordinary urgency and concern was shown by the CPM, under Vijayan, towards Madani. In 2017, when Madani was granted bail to attend his son`s wedding it was the state of Kerala that had paid the security escort expenses of Rs.14.79 Lakhs. The terror accused was openly helped by the Chief Minister of Kerala, Pinarayi Vijayan who actually paid his security bill from taxpayers’ money.

VS Achuthanandan relegated to background

CPM had projected VS as the Chief Ministerial candidate during the campaigning for assembly elections of 2016. By mid-May when the results came VS had mysteriously grown old overnight and was now incompetent for the top position according to CPM brass. Pinarayi was appointed the Chief Minister with help from leaders of his faction, including CPM general secretary Sitaram Yechury. It must be noted that VS had openly supported Hindus on such issues as Love Jihad. Naturally, he had made enemies in Islamist camp and was sidelined in the party with their help.

This did not go down well with the electorate who taught CPM a befitting lesson during the 2019 Lok Sabha elections by virtually routing the party from Kerala. Out of the 20 contested the CPM along with their allies could muster one solitary seat.

The seditious project of leftists is in consonance with the goals of Islamists. A paper by Observer Research Foundation shows that in Bharat, Mappila Muslims of north Kerala have shown the most interest in ISIS. Multiple intelligence reports have recently surfaced showing active ISIS members and sleeper cells from Kerala. It would not be a surprise if Islamists join in this project of Bhasurendra Babu.

The involvement of residents in foreign countries like the Saudi Arabia is also a cause of worry. They not only have requisite financial resources, but also opportunity to team up with other foreign enemies of the nation.

A challenge to the authority of the government, if left unanswered, signals a weakness and encourages such elements. It is important that the Central government intervene immediately and act against such persons who advocate secession and sedition.  One week has already passed and no action has been initiated against Bhasurendra by the state government. Unfortunately, even the local BJP leaders seem to have put the issue on the back burner.

The national media has completely blacked out this issue and even pro-Hindutva news portals have failed to report this. It is imperative that people like Bhasurendra Babu are made famous and made to face the law of the land. When this will happen, remains to be seen.