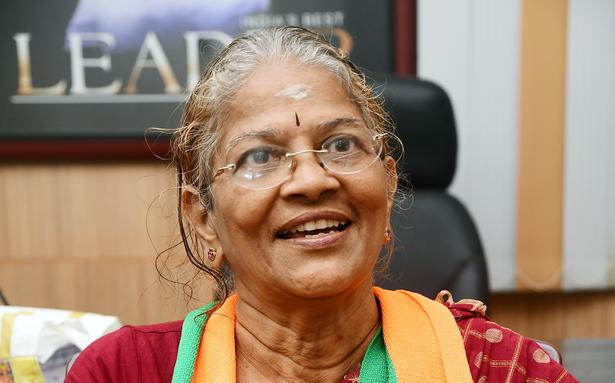 The victory of a temple activist has caused a meltdown among the DMK sympathisers. Uma Anandhan (66) is the Vice President of the Temple Worshippers Society had contested in ward number 134 of the Greater Chennai Corporation. Out of the 200 wards Uma is the sole winner from BJP amid a DMK sweep of the wards under Chennai Corporation. An unapologetic Hindu, her victory has caused heartburn to DMK supporters.

Being the Brahmin haters they are DMK sympathisers had spread fake news that Uma polled only 8 votes and mocked her as “8 Vote Mami” (Dravidianists use Mami as a slur for Brahmin women). But the votes polled in war number 134 hadn’t even been counted at that time. As DMK sympathisers were proud that finally there is a constituent assembly where no Brahmin is present. They celebrated the fact that the assembly is 100% Brahmin free.

Journalists tweeted that “Woman who proudly said I am the grand daughter of Godse who killed Gandhi has llst after polling only 8 votes”. So many of them, including Mannargudi MLA TRB Raja, son of minister TR Balu, had tweeted that there is no place for “radicals” in TN and mocked BJP as One Vote BJP. However later it came to be known that counting of the votes polled in ward 134 hadn’t even begun. After the news that she won by polling 5,539 votes came out, DMK sympathisers deleted their tweets and started abusing Brahmins and Uma is a Brahmin.

Brahmins predominantly live in Mambalam in Chennai from where she contested. So they started abusing Uma and those who voted for her as casteists, fascists, etc deliberately hiding the fact that her opponent who contested on Congress’ ticket is also a Brahmin. Uma had defended Godse in an interview when Godse was termed as a terrorist. She said, Godse only killed Gandhi, didn’t go around killing people and thus cannot be called a terrorist. She proudly accepted that she is a supporter of Godse. It has deeply affected Dravidianists to the point that, one of them, a Christian, advocated for religious conversion as a means to stop the growth of BJP in TN